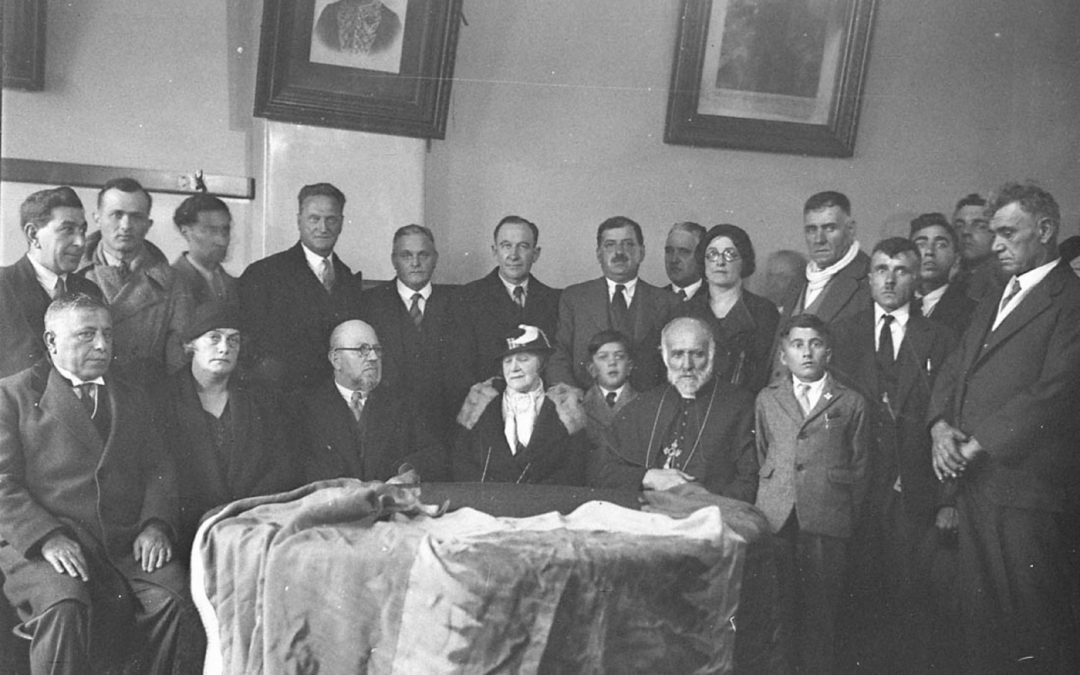 In the late 1890s, a woman named Rosie Broheen migrated to Sydney after a three-month voyage from her home country of Lebanon, leaving her husband and children behind in a country experiencing political turmoil.

Given the anglicised name ‘O’Brien’ by a customs officer, Rosie was granted a hawkers licence and she eventually saved enough money to purchase land in Parramatta.[1] Rosie is believed to be one of the first of the Kfarsghab community, from a rural village in northern Lebanon, to settle in Parramatta. Zahra Youssef Assad Rizk is another woman from this village believed to have settled in Parramatta during the same period.

According to the Australian Kfarsghab Association, these first arrivals had been inspired when they heard stories from returned travellers of the mining operations in Broken Hill. [2] Upon arriving in Sydney, they faced comparatively fewer immigration restrictions than other non-European migrants. Under Ottoman rule, Lebanon was part of the province of Syria so immigrants who came to Australia from the area now known as Lebanon were referred to as Syrians. This continued until around the 1930s to 1950s when they came to be referred as Lebanese with the development of an independent Lebanon. [3]

The more relaxed immigration restrictions the Lebanese experienced during the first years of Federation may have been due to their comparatively light skin and Christian religion. As many obtained work as hawkers they served an important function at a time when mail deliveries were scarce, and where visitors to remote farms were few. The hawkers would load onto their backs essential sheets, towels, brushes and household wares, and set off to walk from town to town, selling as they went.

The first Kfarsghab immigrants to Parramatta were known to send money back home to Kfarsghab, encouraging other village members to migrate. According to a recent interview with a descendent of one of the first immigrants, the first families from Kfarsghab were well established in Parramatta by the time of the post-war wave of migration to Sydney. By 2008 an estimated 10,000 people in Parramatta could trace their ancestry from Kfarsgahb. [4]

Indeed, Parramatta is so important as a centre of Kfarsghabi settlement that the two-kilometre main street of the village in Lebanon has been renamed ‘Parramatta Road’. [5] It is worth noting that since the 1960s, people from the village of Hadchit have also settled in Parramatta and there are now about 500 Hadchiti households in Westmead and Harris Park. Currently, both the Canterbury local government area (LGA) and the Parramatta LGA have significant concentrations of Lebanese. [6]

According to Monsour and Convoy, Lebanese migration to NSW during the late-nineteenth and early twentieth century was part of a massive movement out of Lebanon in the late 19th and 20th century. The reasons for this mass migration are cited as including:

Turkish oppression; the violent conflict between the Christians and the Druze in the 1860s; an exploitative feudal system; the influence of foreign missionaries who encouraged and assisted converts to pursue study abroad; the depressed state of the economy due particularly to the opening of the Suez canal in 1869 which caused a decline in the silk industry; a rapidly increasing population putting pressure on the availability of land; and reports of the success of early immigrants which then influenced relatives and friends to follow in their footsteps.

By 1976, approximately 43,000 Lebanese nationals had arrived in Australia since the end of World War II, the majority arriving during the civil war in Lebanon in 1975–1976.

Sarah Barns, Institute for Culture and Society at Western Sydney University (WSU) for the City of Parramatta, Parramatta Heritage Centre, 2017