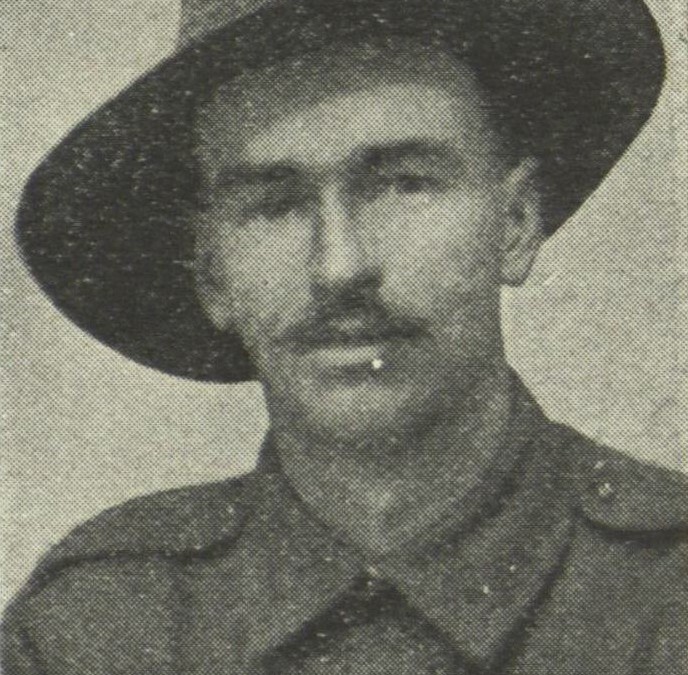 Private Gordon Stanley Hamilton was 24 when he enlisted with the 11 reinforcements, 2 Battalion A.I.E.F. he was the son of John and Annie Hamilton, of Market Street, Combram, Victoria. At the time of Hamilton’s enlistment, he was a railway shutter employed at Clyde yards and enlisted from Granville, New South Wales in the Liverpool camp.

Gordon Hamilton’s legitimacy as a Granville boy was placed into question during the  ‘Queen of the carnival’. During the Carnival held at the public Town Hall meeting, on Tuesday 28 October 1915 to select a candidate for the “Queen of the Day” competition, Mr John Nobbs read a list of names of 20 volunteers who had joined the fight from Granville and had received watches and fountain pens, [including Gordon S. Hamilton. The newspaper report continued;

A lady in the body of the hall indignantly protested against one of those mentioned in the list receiving a watch, as, she stated, he was not and never had been a resident of Granville. Mr. Nobbs stated that he had presented the watch to the soldier in the presence of a well-known and highly respected citizen in all good faith. He would prosecute this matter right up to the hilt and, if any imposition had been inflicted on the wristlet watch committee steps would be taken to have the watch returned forthwith. Messrs. F. Bowdon and J. S. Townsend (secretary) said the watch had apparently been secured under false pretences, which was a degrading thing to do, and the watch should be returned. Mr. Bowden: “I hope there are no repetitions of this kind, the watches were costly, and this sort of thing was very discouraging. The watch fund was considerably in debt, and they had no time for imposters.” It was eventually decided, on the motion of Mr. F. Bowden, seconded by Mr. Jones, to instruct the secretary to ascertain all particulars from the recipient of the watch. Mr. Nobbs also offering to assist in the investigation.

On 2 November 1915, Hamilton embarked from Sydney aboard the HMAT Euripides A14 . While training at Tel el Kebir, Egypt he joined the 2 Battalion on 5 February 1916. Ten days later, he was taken on strength and transferred to 54 Battalion. By 17 March 1916, he was again transferred to 5 Division Artillery and posted to 56 Battery.

On 20 June 1916,  he proceeded overseas from Alexandria to Marseilles, France, disembarking on 30 June 1916, to join the British Expeditionary Force. By 8 July 1916,  he was again transferred to 25 Field Artillery Brigade.

Hamilton was wounded in action 20 July 1916 and admitted to No. 8 Stationary Hospital, Wimereux for gunshot wounds to his ankle and transferred to England the next day via hospital ship “Jan Breydel” from Boulogne, France and admitted to General Military Hospital, Colchester on 22 July 1916.

Sadly on 1 October 1917, Gunner Gordon Stanley Hamilton, at just 27 years old was killed in action at Passchendaele, Ypres, Belgium. He left behind a will for his windowed mother and will be remembered on the Menin Gate Memorial, Ypres, Flanders, Belgium.