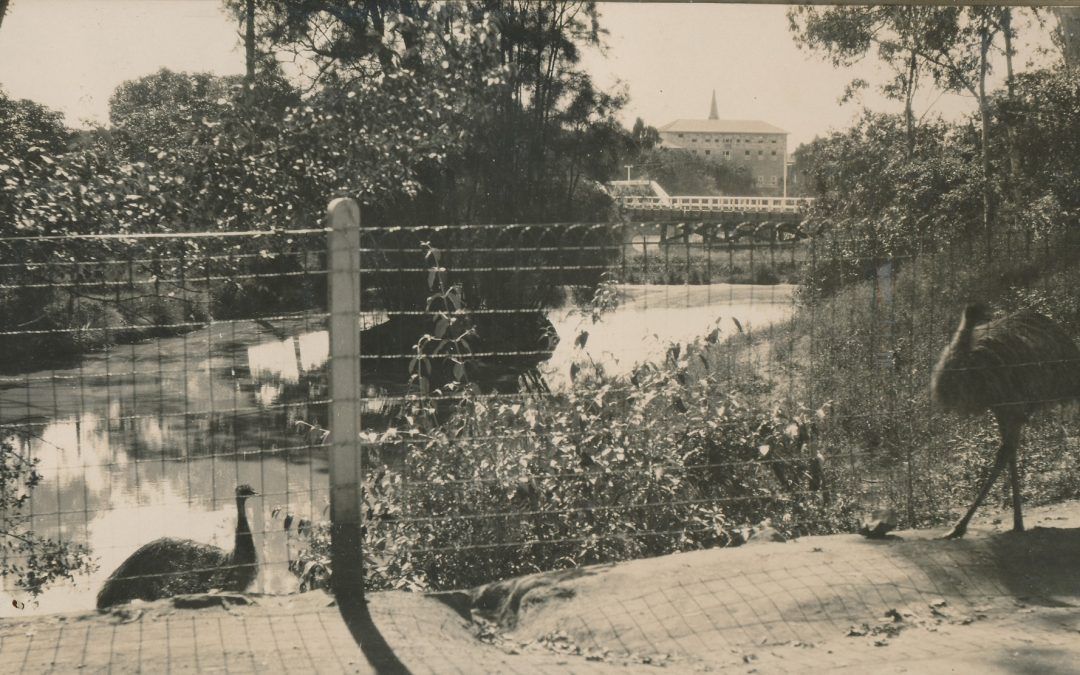 Emus in the zoo at Parramatta Park, c. 1930s (photograph donated to City of Parramatta Community Archives by the family of S.Davies)

In September 2017 it was announced a new world-class zoo, overlooking Bungarribee Park in Blacktown, will be opening in 2018. Reports state the zoo will feature “30 exhibitions including African safari animals and an integrated Aboriginal and natural heritage program, focusing on the local Darug people”.[1] However, many people are unaware that the first zoo in Western Sydney was situated in the centre of Parramatta – in Parramatta Park, close to the Gatehouse entrance on George Street![2]

Of course, the land where Parramatta Park now stands has teemed with wildlife for many tens of thousands of years. The area was a popular and plentiful hunting and fishing ground for the traditional custodians, the Burramattagal people. Domesticated farm animals were introduced by the European colonists on arrival in 1788, and non-native wild animals joined them shortly after – it is said Governor Macquarie’s wife, Elizabeth, established a Deer Park and small menagerie in the grounds of Old Government House in the early 1800s.[3] 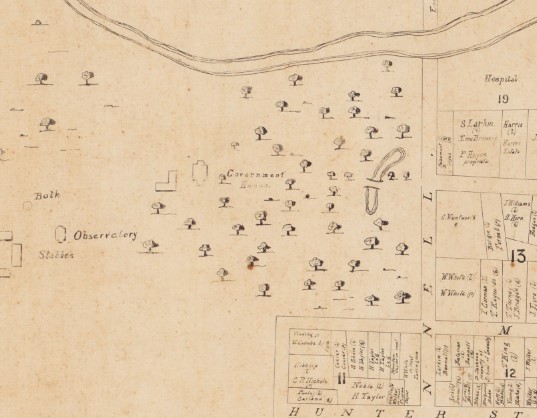 The bottom, right corner of Parramatta Park was a Deer Park for many years, and housed the Parramatta Zoo from 1934 to 1951 [Brownrigg Plan, 1844]

In 1859, following the publishing of Charles Darwin’s seminal work of scientific literature, On the Origin of Species, interest in the observation of wild animals kept in captivity spread across the world. [4] Sydney’s own Zoological Gardens, situated in Moore Park, opened in 1884.[5] Some of the animals transported to Australia for the zoo were initially housed within Parramatta Park to ‘acclimatize’ them to the local environment.[6]

By the late-1800s, the zoo had begun to outgrow the space at Moore Park and when, in 1902, it was announced a new site would be secured, the Parramatta Progress Association actively lobbied for its relocation to Parramatta Park, as they “couldn’t think of a better site for the zoo”.[7] In the end, the Moore Park zoo moved to its current harbour-side site – Taronga Zoo opened in 1916.

However, interest in gathering the dispersed collection of native and introduced animals residing across the grounds of Parramatta Park into a recognised Zoological Gardens remained.

During the early years of the 1930s, the achievement of this aim was actively pursued by the Parramatta Park Trust. Minutes of Trust meetings dating from this time, now held in the Parramatta Council Archives collection, record a great deal of enthusiastic discussion around this topic. Finally, in 1934, after a significant amount of negotiation and activity, the Quarantine Authority granted the permit required for a Zoological Garden to operate in Parramatta Park.

Contemporary newspaper articles report on the exotic animal attractions at the zoo when it opened later that year including deer, antelopes transferred from Taronga Zoo, an aviary of colourful parrots, swans and ducks donated by local residents, and a monkey who had been living “a lonely existence for some time” elsewhere within the park (hope was expressed with regard to finding him a suitable mate).[8] Also enclosed within the zoo grounds were many of the native park animals including wallabies, kangaroos and emus.

Emus had lived in Parramatta Park for many decades, and were well-known and affectionately regarded by local residents. The City of Parramatta Research and Collection Services holds within its photograph collection an intriguing image from the late-1800s featuring one of the famous Parramatta Park emus entertaining patients on the ward of a local hospital. 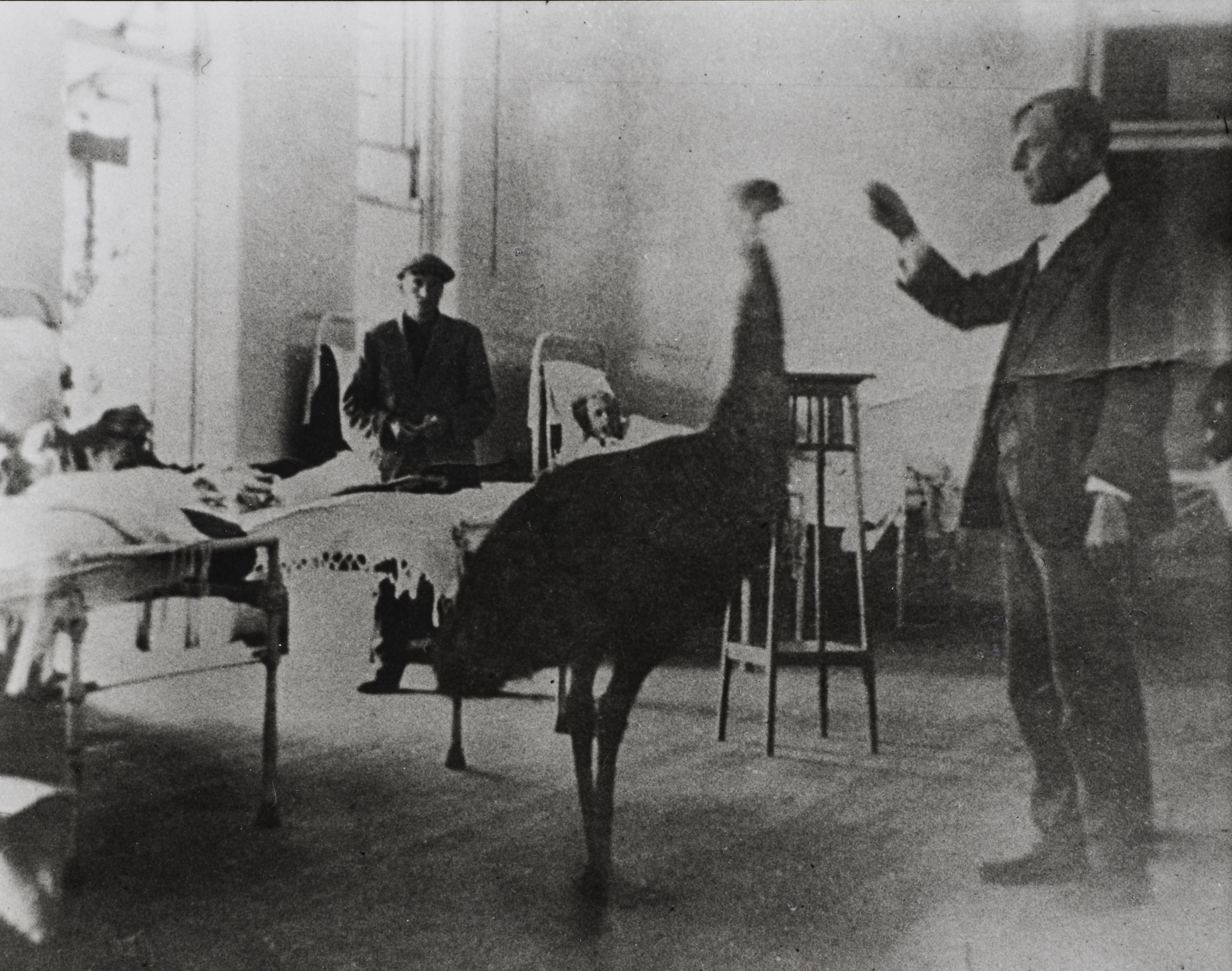 Images of the zoo in Parramatta Park have proven to be elusive. Excitingly, in recent months an image of the zoo, depicting two of the much-loved emus, came into the City of Parramatta Community Archives collection. The photograph was contained in an album donated by the family of long-standing Council officer, Mr Sydney Davies. Mr Davies held the position of Town Clerk from 1905 until 1939, and also during this time served on the Parramatta Park Trust, where he enthusiastically supported the development of the zoo at Parramatta. 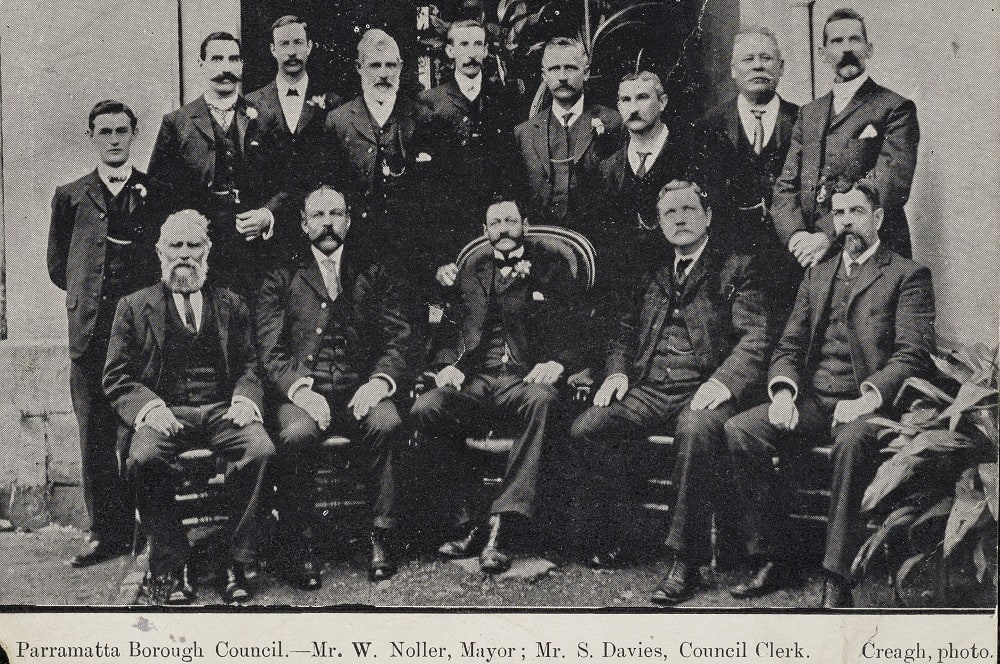 Mr Sydney Davies (middle, back row) was a long-term Town Clerk, a member of the Parramatta Park Trust, and a keen advocate for a zoo in Parramatta during the early-1930s (City of Parramatta Research and Collections Service photograph collection, LSP00158)

From 1937, the Parramatta Park zoo was operated by the Wyles family, who lived in the Gatehouse at the George Street entrance[9]. Under the management of the Wyles, the zoo thrived and a small cafe and giftshop was also opened in the Gatehouse. Although the zoo was initially an exciting and popular attraction, and apparently a great favourite with local children of the time, its fortunes appear to have waned over subsequent decades, and the number of creatures dwindled. In 1951, the few animals that remained were transferred to Taronga Zoo.

The zoo cages and enclosures were left empty until they were finally demolished during construction of the Parramatta RSL club building in 1958. However, some material evidence of the zoo has survived and recent archaeological excavations of the area have revealed tantalising remnants of the zoo’s physical structure.[10]

Zoos have, over recent years, become contested terrain. In social discourse, concerns expressed around the welfare of contained wild animals are generally counterbalanced by the posited positive educational, research and conservation outcomes.