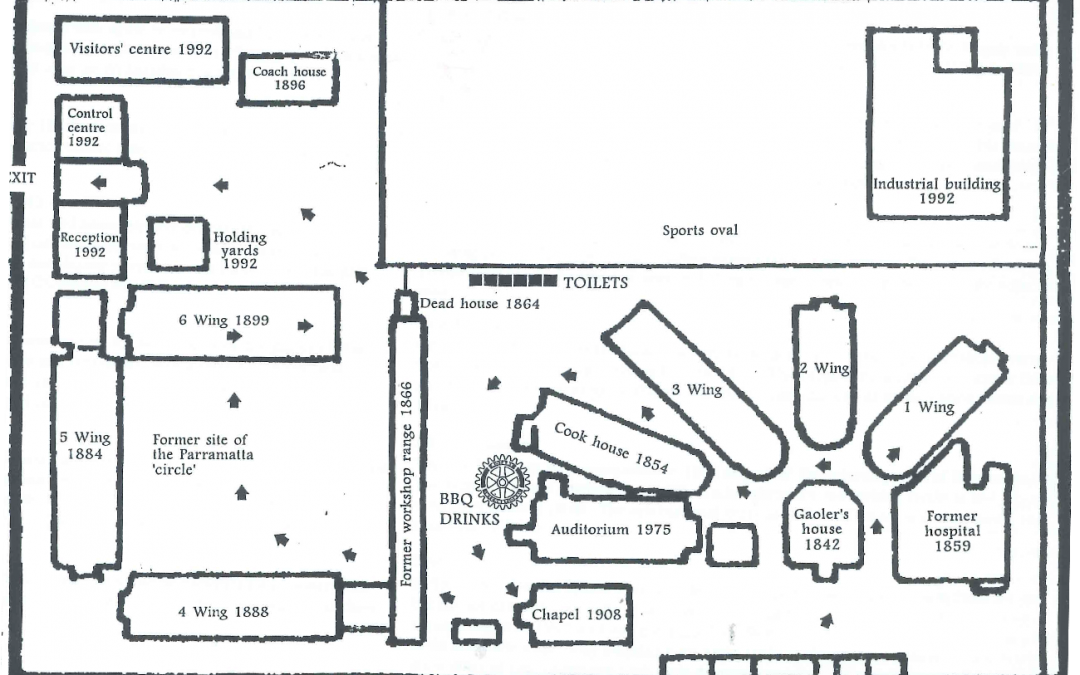 The Parramatta Gaol was built to accommodate maximum security prisoners. On the completion of wings 4, 5 and 6 it was able to accommodate between 400-500 prisoners ‘comfortably’ and was often filled to capacity. However, the first World War saw a decline in the number of prisoners in New South Wales and led to the closure of the gaol between 1918 – 1921. The complex was handed over to the Department of Health which used the facility to accommodate mental health patients.

With the end of the war, the prison population once again increased and Parramatta Gaol was reopened in July 1922.  It then functioned as a gaol for the next 75 years (in 1984 it was reclassified as medium security) until its closure on Wednesday 3 September 1997.

The gatehouse was built at the peak of the 1840s depression.  It consisted of four rooms flanking the gate arch for the gatekeeper and resident turnkeys. The gatehouse was extended in 1943, 1953 and again in 1974.

The gaoler’s house was used both as a home and administrative office. It was the only structure on the gaol premises to be fitted out internally with decorative conventions of the day. In 1902 residences for the governor and deputy governor were built outside the gaol premises facing the gaol on Clifford (now O’Connell) Street.

This once handsome sandstone structure was built on the north flank of the gaoler’s house in 1859.  It was enlarged with an upper floor and verandahs were added during the next decade.  The building has since had many uses, including a bakery which may have been the cause of the fire which destroyed part of the upper floor and verandah.

These 3 wings are the original wings of Parramatta Gaol.  They were until recently the oldest in original use in Australia and the most intact of the early gaols.  The right side of 1 wing accommodated the female prisoners until the mid-1920s and 1930s.  In 1984, a riot at Mulawa Correctional Centre resulted in the transfer of female prisoners to 4 wing at Parramatta.

During the first dozen years of the gaol’s occupation, cookhouse facilities for prisoners and resident wardens were makeshift and short-lived.  Only the gaoler had a permanent kitchen which was in the basement of his house.

Apart from the 1908 chapel which was reserved for religious activities, the gaol never had a covered place for activity.  The auditorium was built in 1975 and served as a venue for a range of recreational activities.

In 1906 the building formerly used as the deputy governor’s residence was demolished to make way for the chapel, a sandstone and slate ‘Early English’ gothic structure.  It was designed by the government architect and was complete with an open timber roof, fine joinery, organ and stained glass windows.

Completed in 1866, this two-storey range of workshops housed all the industrial activities of the prisoners.  It was largely referred to as the ‘boot shop.’

Completed in 1901, the circle, also known as the bullring was a radial ‘exercise yard.’  It comprised 32 segregated units which were used to isolate inmates of questionable character who posed a threat to prison officers and fellow inmates.  The infamous circle was situated between 4, 5 and 6 wings and was demolished in 1985.

This facility was built as far as possible from the accommodation areas to hold the dead awaiting burial.  Occasional post-mortem examinations took place in this room which in recent has had a range of uses including storage of sports equipment for the adjacent oval.

Commonly referred to as the Coach house, the masons’ and workshops’ were housed in this two-storey building built in 1896.  The carpenters occupied the upper floor and the stonemasons the ground floor.  Its most recent use was an education centre and library.

The new buildings were completed in 1992 as part of the redevelopment of Parramatta Gaol.  This included a new gatehouse, reception, administration and visiting facilities and temporary holding yards.  The original gaol entry at O’Connell Street was abandoned and relocated off Dunlop Street.

In 1911 the sewerage system was completed.  It serviced water closets throughout the gaol but did not extend to the cells.  The cells retained the traditional night bucket.  Sewering of the cells began in 1969 and was completed in 1974.  Prior to that, inmates made a daily trip to the cesspools where they emptied their night buckets.  Stone stairs between 5 and 6 wing show years of continuous use with their depressed treads.