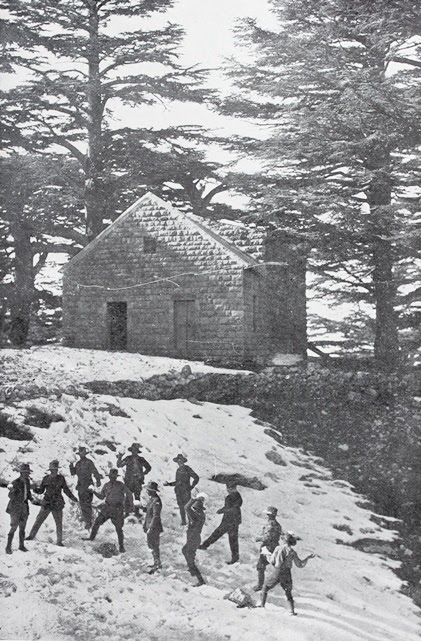 Light Horse Soldiers of the Australian Mounted Division throwing snowballs on the Lebanon Hills during their journey from Homs to Tripoli, Charles bean, Volume 12, illustration 681

In early 1915 the Turkish Jew, Alexander Aaronsohn, travelled to the independent province of Lebanon to visit his sister and also report on the locust plague which had just devastated the area.  At this time Lebanon was known primarily through the Bible and its references to the mountains on its border. In fact it was at this time a beautiful province of about four thousand square miles populated mainly with a Christian sect called Maronites, and another sect, the Druses.

According to Alexander the Maronites were continually fighting against the Druses as a result of Turkish policy of “divide and rule.” In 1860 Turkish troops joined with the Druses and committed wholesale massacres upon the Maronites that spread as far south as Damascus, where many thousands of Christians were killed in two days.

This resulted in the sending of 50 warships to Beirut by the European powers and the landing of 10,000 French troops. As a result of this intervention Lebanon gained autonomy from Turkey and was instead led by a General Council which included representatives of all the different races and religions of the population

Macadamized roads were built all over the province. Aaronsohn describes how these changes had created across the Lebanon province peaceful and prosperous villages, schools filled with children, immense plantations of mulberry trees and olives, the slopes of the mountains terraced with beautiful vineyards, police on every road to help the stranger, and young girls and women with happy laugh and chatter working in the fields.

With a population of about six hundred thousand this province exported annually two million dollars worth of raw silk,(silkworm raising being a specialty of the Lebanon).

When autonomy was granted the Lebanon, French influence became predominant among the Maronites and other Christians of the province. French was spoken by almost all of them, and according to Alexander … love for France was a deep-rooted sentiment of the people. On the other hand, the Druses feel the English influence

By 1915 however the war had changed many things for Lebanon as Turkey was once again in ascendency as French and British interests were forced to the periphery.

Alexander found on all the roads Turkish soldiers who stopped him every minute to ask for his papers and that Turkey had in fact occupied Lebanon. As he entered Ed-Damur, one of the most prosperous villages in Lebanon he saw entire regiments of Turkish troops encamped in and about the village. When he explained he was also … the son of an oppressed and ruined community, all the sadness and bitterness of their hearts was told me,  how the Turkish soldiers had spread over the beloved mountains of Lebanon; how the strong, stalwart young Lebanese had been taken away from the mountains and forced into the Turkish army; how the girls and women were hiding in their homes, afraid to be seen by the soldiers and their officers; how the chieftains were imprisoned and even hanged; and how violence and pillage had spread over the peaceful country.

Seeing these changes Aaronsohn felt the allies missed a great chance to change the course of the war for if they had landed in Palestine he wondered whether the Lebanon and Syria would have raised an army to fight for their independence.

In Beirut he caught up with his sister who was being looked after by President Bliss, of the Syrian Protestant College. This college was the refuge for many but by 1915 the Turkish Government was increasingly dismissive of the autonomy of the college and had begun to enter the premises to search for refugees  without troubling to ask permission from the American Consul.

By late 1918 things in Lebanon the tables had been almost completely turned. In October of that year the allies took Damascas after a long campaign that had started way back in 1915. Aaronsohn had seen the beginning of these operations when he was travelling through Beersheba and had seen the Turkish troops preparing to leave on their unsuccessful assault on the Suez Canal.

By October 1918 the Australian forces in Damascas had captured the town, and taken thousands of prisoners, but found themselves crippled by an outbreak of malaria and tuberculosis (TB). So while Australian the 5 Cavalry under Major General MacAndrew continued to press towards Aleppo it was the 7 Meerut Indian Infantry which began its march from Haifa to attack Beirut on 3 October 1918.

After marching across the ‘ladder of Tyre’, where they were also forced to cut a roadway into the cliff face in order to move their wheeled transport, they arrived at Beirut on 8 October. Here they found two French warships already in the harbour with the Turkish troops either departed or surrendered to the local inhabitants. These were handed over to the Indian troops who then pressed on toward Tripoli.

This action eased the transport problem for the Australian 5 Cavalry Division who were now more or less free to advance on Homs and then press on across the Lebanon mountain range to Tripoli as well.