The suburb of Camellia is an industrial suburb on the south bank of the Parramatta River, east of the Parramatta CBD. It is part of the Rosehill Ward of the City of Parramatta. Camellia is surrounded by the Rosehill Racecourse to the south, Clay Cliff Creek to the west, and Duck River to the east. Clay Cliff Creek is of particular historical significance as it is where Governor Arthur Phillip and Captain David Collins, Lieutenants Henry Lidgbird Ball and John Cresswell, Reverend Richard Johnson and Doctor John White, with armed soldiers and seamen camped for the night on 23 April 1788 on their exploration of landforms which were subsequently named the Crescent and Rose Hill. The major roads shaping the suburb of Camellia are James Ruse Drive and Grand Avenue.

The Burramattagal clan of the Darug people were the original inhabitants of this land. Clay Cliff Creek with its freshwater, and the Parramatta River provided a consistent and varied source of foods for the members of this clan. [1]

Charles Williams, alias Christopher Magee, received the first land grant in Camellia. He was granted 30 acres (12 hectares) by Governor Phillip on the south banks of the river on the 18 July 1791. Christopher, who had been sentenced at the Old Bailey to seven years’ transportation, arrived on the First Fleet per ‘Scarborough’ on 26 January 1788 . On the 31 August 1788 Christopher married Eleanor McCabe/McCave/Magee, who had also been tried at the Old Bailey and arrived on the First Fleet per ‘Lady Penrhyn’ and ‘Prince of Wales’. On the 18 January 1793, Christopher, Eleanor and their daughter, and a woman named Mary Green were on a boat on Parramatta River returning to Parramatta, when the boat overturned near Breakfast Point. There were reports that they had been drinking and arguing, and this had resulted in the accident. Eleanor and her child and Mary all drowned – only Christopher survived. Christopher had tried to save the child, but failed. Eleanor and her daughter were buried by Christopher on the grant received, in front of the hut in which they lived. Eleanor and her daughter’s grave still stands today, and is one of the oldest in the country. 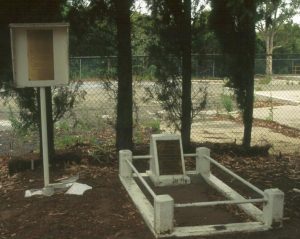 Another original grantee was Lieutenant William Cummings. He arrived in 1792 with the New South Wales Corps, and was granted 200 acres by 1794. Christopher Magee eventually sold his grant, which included the house, crop and stock, to Lieutenant Cummings for less than one hundred pounds. These combined land grants were purchased by John Macarthur Esquire in 1816. [2]

The naming of Camellia

Silas Sheather arrived in Sydney in 1839 with his family. His father Henry Sheather was contracted to work as a gardener for Sir William Macarthur in his plant nursery at Camden. Silas also worked at the plant nursery at Camden Park, which most likely included camellia seedlings, and later worked at Newlands and at Elizabeth Farm for George Oakes. Silas married Anne Bellamy in 1850, and in 1852 he entered a lease of about three acres of the Elizabeth Farm Estate with the permission of Sir William Macarthur. This lease was located on the banks of the Parramatta River on the eastern side of the Clay Cliff Creek. It was here that Silas developed his camellia nursery, and had many different varieties of camellias for sale. As camellias were the speciality of his nursery, Silas named his nursery Camellia Grove Nursery. In 1889 Silas purchased the land, which remained intact until after his death in 1906. In 1916 it was purchased by James Hardie and Company.

The railway station which opened in 1885 was originally known as Subiaco, but this needed to be changed as it was being confused with the significant home built by John Macarthur’s nephew, Hannibal Macarthur. [3] As a result, in 1901 the railway station’s name was changed to Camellia, taking the name from Silas Sheather’s Camellia Grove Nursery, and from this alteration the suburb gained its name.

One of Camellia’s major industries was the tannery and boot making business Anschau’s Tannery which was opened in 1895, and established by the  German migrant Joseph Anschau. This site was later taken up by Continental Grain Limited, which later purchased Meggitts Limited, one of the state’s largest seed crushing plants. In 1896 approval was received to erect a slaughter yard and meat processing plant that was called Sandown Meat Works. This company burned down in 1923.

The James Hardie Company, an asbestos-cement products manufacturer, was established in 1916 and began producing in 1917. The company was established on the eastern side of Camellia Railway Station. The company began making asbestos sheet cladding under the brand name ‘Fibrolite’. Gradually the range was extended to cement water pipes, plumbing accessories, brakes and heat – insulating materials. [4] The company closed in 1996. James Hardie was influential in the growth of Camellia, but this became controversial with the knowledge of the impact that asbestos has on human health.

The Australian Cream Tartar company was formed in 1926. This factory was serviced by a the Sandown rail spur, a private railway which provided rail transport for the factories established on the south bank of the Parramatta River. John Bennett had received parliamentary approval to construct a private line to the Rosehill racecourse in 1886 which opened the industrial area to rail transport.

Other major industrial enterprises included Wesco Paints, registering in 1920; Goodyear Tyre and Rubber Company, who began manufacturing in Camellia in 1933; and significantly, the Shell Oil Company, which closed in 2012.

The future of Camellia

The NSW Department of Planning, Industry and Environment in consultation with the City of Parramatta have prepared a draft Camellia Town Centre Master Plan which will guide the future development of the industrial area over the next few decades. The objective is to shape the community as a new riverside community, with improvements including transport and road upgrades, walking and cycling paths. The Parramatta Light Rail, Stage 1, when completed in 2023, will provide frequent services from a station in Camellia to Parramatta, North Parramatta and Westmead’s employment, education, health and entertainment opportunities. The light rail will also provide easy access to the suburbs of Rydalmere, Dundas, Telopea and Carlingford. [5]

The Stage 2 route for the Parramatta Light Rail from Camellia Town Centre to Olympic Park is currently being finalised and will provide further connections east of Camellia to Ermington, Melrose Park, Wentworth Point and Sydney Olympic Park. [6] The draft plan also addresses environmental issues governing the site and crucial remediation measures required to reinvigorate the suburb and lead to its future development and renewal.
This in conjunction with other key initiatives to create a community hub will help to rescue what has been seen as a ’lost suburb’.