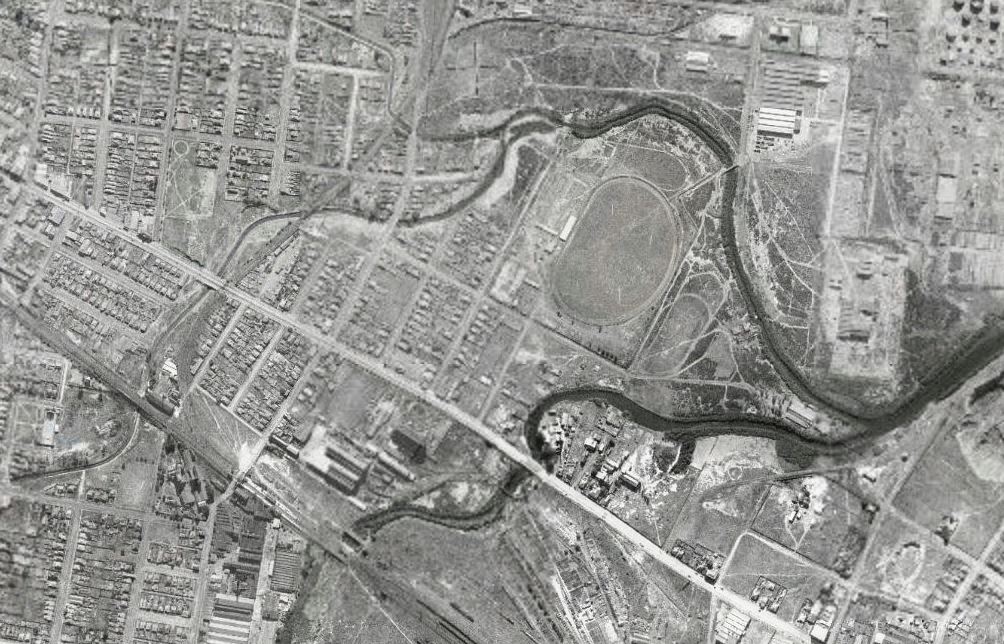 A small industrial suburb to the south-east of Parramatta CBD and adjacent to Granville, Clyde is bounded by Duck Creek to the north and west and the Duck River to the south east. It is part of the Rosehill Ward of the City of Parramatta. The history of Clyde is closely linked to the expansion of railway infrastructure along the western line and the associated development of manufacturing in the area. This suburb today is dominated by industry and has very little residential population [1]. The area has seen many changes since the beginnings of European settlement and needs to be viewed in context with the history of the wider geographical area.
European history of the Parramatta District began in April 1788 with an exploration party led by Governor Arthur Phillip, which travelled along the river to the vicinity of The Crescent and decided upon the site of the town of Parramatta. Phillip identified the junction with the Parramatta River and travelled for a distance along the Duck River [2].
For thousands of years the land around Parramatta was home, hunting ground and meeting place for members of the Burramattagal clan of the Darug people. European settlers cleared the land seriously diminishing the supply of native plants and animals on which Aboriginal people relied. [3] 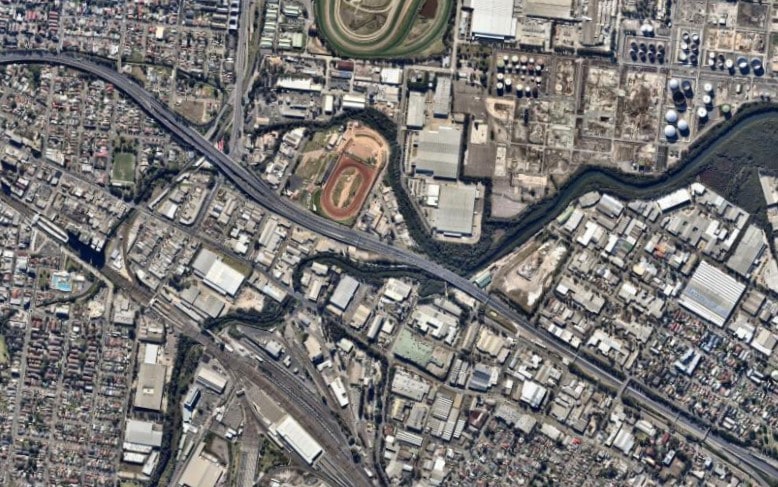 Aerial view of Parramatta with the suburb of Clyde in the centre with boundaries to Duck Creek and the Duck River. City of Parramatta 2018.

Early European Settlement
Early land grants in the Clyde area included 200 acres (40.5 ha.) to James Smith in January 1818. To the south were located the 60 acres (24.25 ha.) of James Wright granted in June 1823 and 250 acres (101 ha.) to William Charles Wentworth and William Lawson in 1840. To the north of the Clyde area was located the expansive grants of John Macarthur. European settlers observed a landscape dominated by tall open forest now known as Cumberland Plain Woodland with area of mangroves, saltmarsh and wetlands along the riverbanks with an abundance of wildlife [4].
Market gardens, orchards and mixed farming dominated the landscape of the Clyde area for the first half of the 19th century. In 1833 the Duck River Bridge Farm of 120 acres (48.5 ha.) bounded by the Parramatta Road, Duck Creek and Duck River was advertised for rent by William Charles Wentworth as a desirable property for market gardeners due to access to land and water and the quality if the rich alluvial soil [5].
The Development of the Railway
Initially a project of the Australian, Southern and Western Railway Company, the construction of the Sydney to Parramatta Railway was taken over by the NSW government in 1854 and the new line opened on 26 September 1855 to ‘Parramatta Junction’ now Granville. In July 1860 an extension of the line to Blacktown was opened with a new station in Argyle Street, Parramatta [6]. A steam operated timber mill had been constructed by William Randle at Duck Creek from local forests for the manufacture of railway sleepers, wagons and building materials for the construction of homes for the workers [7].
In 1874 a large area of land was resumed south of the railway line for the construction of the Clyde Marshalling Yards for the management of freight traffic on the southern and western lines. Later support activities such as repair workshops were added to the site. [8]
Industrial Development
The rivers and creeks of the Parramatta area were an important water resource and transport route for the growing town. The potential of the lands south of the Parramatta River in the vicinity of the Duck River were recognised by the firm of Hudson Bros. who had established a timber and joinery works in Redfern in the 1850s. By the late 1870s, the business had outgrew its Redfern site and a new location of about 7 acres (2.8 ha.) was chosen at what is now known as Clyde [9].
In 1884 Hudson & Sons amalgamated with Robert Ritchie agricultural machinery including ploughs and chaff cutters. The company became very diversified, manufacturing trams as well as railway carriages and wagons, and ‘Clyde’ brand windmills [10].
Adjacent to the new works, a township had begun to grow with several subdivisions of residential land being offered for sale. The grand opening of the Hudson plant took place in July 1883 [7]. The industrial township was initially known as ‘Hudson’ or ‘New Glasgow’ because of the Scottish origin of the majority of the workers. The adjacent railway platform also officially opened in 1883 was named Clyde Junction by the Commissioner of Railways Edward Miller Grant Eddy who stated that  “New Glasgow is close by and as old Glasgow is watered by the Clyde, to which Duck River has been likened, perhaps Clyde would not be unacceptable”. The station became Clyde Junction in 1901 but reverted to Clyde in April 1904 [11].
In 1882, a tramway was constructed on the southern bank of the Parramatta River. The line carried both passenger and freight traffic to and from Redbank Wharf near the junction of the Parramatta and Duck Rivers into central Parramatta with a terminus on the corner of George and O’Connell Streets opening up the area to development [12].

Advertisement for the sale of land at Clyde adjacent to Hudson’s new engineering works. Advertising. The Sydney Morning Herald (1884, December 10) p. 16. Retrieved on 25/72019 from https://trove.nla.gov.au/newspaper/article/13581474 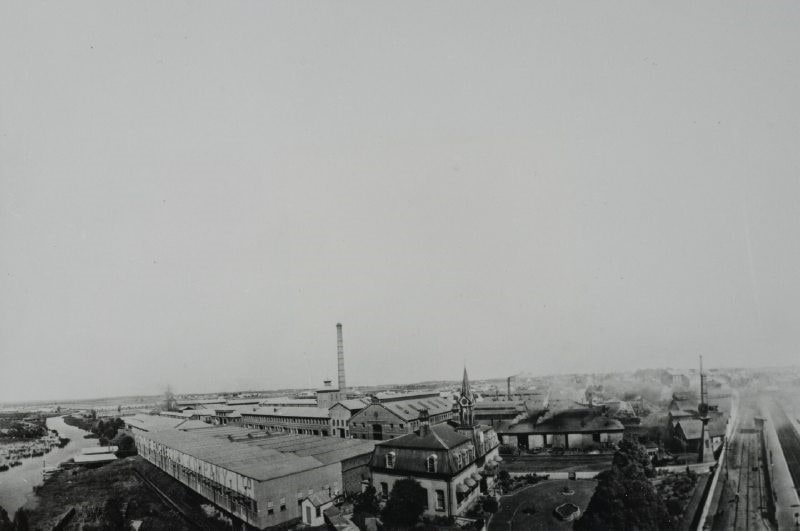 Over the course of the twentieth century the character of the suburb changed from mixed residential and industrial to almost wholly industrial. In 1897 the established firm of Hudson Bros. went into voluntary liquidation and in October 1898 the former Hudson works became the property of the newly formed Clyde Engineering Co. Ltd [12].
In 1925 a crude oil refinery on the southern bank of the Parramatta River near the junction with the Duck River. Known as Clyde Refinery the plant was built by John Fell and Co. Pty. Ltd. In 1925. From 1928 until its closure in 2013 it was operated by Shell Refining (Australia) Pty. Ltd [13].
In 1976 plans were made to convert the trotting track of the former Granville Showground into Parramatta Speedway, now known as Valvoline Speedway [14]. The speedway occupies the north-western portion of the suburb of Clyde.
The 21st century will see another phase in the history of the greater Clyde area. There has been a reduction in heavy manufacturing as a landuse in several areas in and around Parramatta such as Clyde and Camellia to the north-west. There is recognition of the value and need for the rehabilitation of degraded natural landscapes and former industrial sites to facilitate reuse of these landscapes.