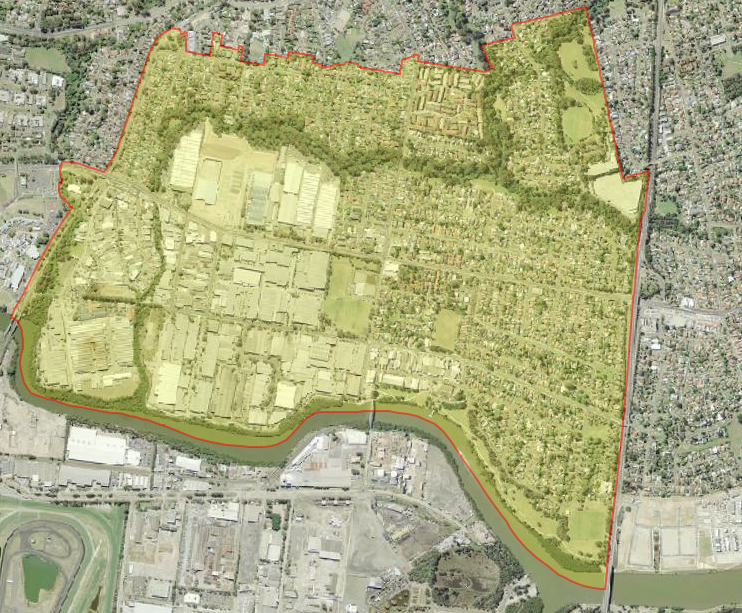 Rydalmere is a residential suburb located approximately 3 kilometres east of Parramatta to the north of Parramatta River, and is surrounded by the suburbs of Camellia, Ermington and Dundas. The roads and streets which form its boundaries include Silverwater Road, Calder Road, Railway Street and Ulm Street. It is part of the Rosehill Ward of the City of Parramatta, and the suburb was assigned its name by the Geographical Names Board on the 19 January 2007.

Before European settlement, the Burramattagal clan of the Darug people were the original inhabitants of this land. Burramattagal is believed to come from the Aboriginal word for ‘place where the eels lie down’, referring to the Parramatta River. The Burramattagal have a very important and spiritual connection with the Parramatta River from which they caught eels and fish. Their stable, bark canoes often held a central small fire, built on a mound of soil, to cook up their fresh catch. ‘Fire-stick farming’, employed to burn vegetation to facilitate hunting and to change the composition of plant and animal species in the area, was also practiced by the Burramattagal people. [1]

The Vineyard and Subiaco Estate

The first free settler in the Rydalmere district was Phillip Schaffer, who had arrived per ‘Lady Juliana’ in 1790. He had arrived from England as a superintendent of convicts. He received a grant of 140 acres on 30 March 1791 from Governor Arthur Phillip, which was only the fourth land grant made by Phillip to a free settler, and began farming maize, wheat, tobacco and planting grapevines. He built a house he called the Vineyard. In 1797 this property was sold, and in 1813 Hannibal Hawkins Macarthur, the nephew of John Macarthur, bought the Vineyard and in 1836 had a stone mansion commissioned. However, as a result of the depression in the early 1840s, Hannibal was forced to sell the estate, which was eventually bought by Bishop John Bede Polding, the first Roman Catholic bishop and archbishop of Sydney, who had the mansion renamed Subiaco. This was when the creek was renamed Subiaco Creek. Polding established a convent of Benedictine nuns, who ran a school there. The Benedictine nuns lived and worked at Subiaco until 1957, and in 1961 the property was sold to the hot water specialists, Rheem, who had the property demolished for a car park.

One of Rydalmere’s most important landmarks is Truganini, located at 38 South Street, Rydalmere.  It was one of a number houses including ‘Yaralla’ and ‘Newington’ which were built along the riverbank during the 1800s by prosperous landholders taking advantage of the beautiful aspect, the recreational opportunities and the prestige of a riverside estate. The site has had many owners over its long and interesting history. The history of ‘Truganini’ is firmly linked with that of the immense land holding on the northern bank of the river amassed by Hannibal Hawkins Macarthur.

More recently the area was designated for industrial subdivision and it was through the far-sightedness of its owners from 1946, International Combustion Pty Ltd (ICAL) that the house has been preserved. For many years the company used the premises for board meetings as well as accommodation for overseas guests ensuring a high standard of maintenance and conservation. [2]

The Female Orphan Institution (also known as the Female Orphan School) was established in 1800 by Governor King to care for orphaned and abandoned children in the colony of NSW. The foundation stone for a new ‘Female Orphan School’ building  laid in 1813 by Governor Lachlan Macquarie and was completed in 1818. By 1829 the female orphanage housed 152 girls from a cross-section of colonial society including Aboriginal communities. On 30 April, 1850 the Male Orphan School, which had been relocated at Liverpool in 1823 was closed. The remaining residents moved to the Female Orphan School site at Parramatta and the two establishments amalgamated to form the Protestant Orphan School. [3] After the Protestant Orphan School closed in 1886, the building was transferred in 1888 to the Department of Lunacy as a branch of Parramatta Hospital. In 1891 it was renamed Rydalmere Hospital for the Insane, and has over time also been known as the Rydalmere Mental Hospital and the Rydalmere Psychiatric Hospital. In 1989 the Rydalmere Psychiatric Hospital closed, and remained unused until the University of Western Sydney bought the site in 1995. The building has undergone extensive restoration, and now houses a Female Orphan School Information Centre, with a heritage display exploring the building’s history from 1813. [4]

The naming of Rydalmere

In 1866 orchardist and property speculator Thomas O’Neill, who had acquired part of the old Vineyard Estate, began subdividing the land. He named the subdivision Rydal after Rydal in the English Lakes District where he was born, and added the word ‘mere’ meaning lake in other languages – to reinforce the lake imagery – and thus created the name Rydalmere which gave rise to the suburb also being referred to as Rydalmere. Other accounts also suggest the name was taken from the village of Rydal in Westmoreland. The formation of the Ermington-Rydalmere Municipal District in 1891 further reinforced the name. Rydalmere railway station which is on the Carlingford line of the Sydney Trains network, opened as Victoria Road on 20 April 1896. The line had initially been privately owned, but by 1901 it was government owned, and was renamed Rydalmere on 1 August 1901. This was an important time in Rydalmere’s history, with the first school opening in 1891, and the first Post Office opening in 1888. 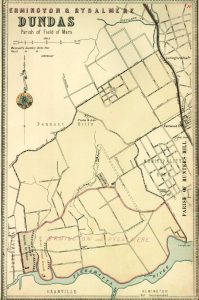 Municipality of Ermington and Rydalmere  1891-1948

The Municipality of Dundas was established in 1889, and Rydalmere was included in the southern part of this municipality. However in June 1891 it seceded and became part of the Municipal District of Ermington and Rydalmere. This new municipality also included parts of Ermington, Melrose Park and parts of Dundas. From 28 December 1906, the council was renamed as the ‘Municipality of Ermington and Rydalmere’, and the first public meetings and council meeting took place in the Rydalmere School of Arts on Victoria Road, Rydalmere. [5] In December 1948 the first Greater City of Parramatta was formed by the amalgamation of Rydalmere, Dundas, Granville, Ermington, and Parramatta.

After the Second World War, Rydalmere which had been largely rural, began to open into new residential areas. The Housing Commission built many new homes which Australian returned servicemen and their families occupied. Industries began to develop in the area in the space allocated to them in the industrial zone. [6]

In the nineteenth century the local community were dedicated in their desire for a park, and in 1891 it was decided that a park will to be created. This was however delayed by the formation of the new municipality of Rydalmere and Ermington in 1891. Land was eventually  assigned on Park Road at the end of the nineteenth century by the New South Wales Government, and this was transferred to Ermington-Rydalmere Council in 1928. In 1929 the Rydalmere Cricket Club asked council to make the necessary improvements so that the park would be suitable for cricket matches, and in that year a cricket pitch was created.

Recently a new Masterplan has been developed by the City of Parramatta Council for Rydalmere Park to help develop its identity to meet the growing community needs for recreation. The Masterplan proposes the following improvements for the park:
• Enhance sporting infrastructure to meet current and future needs, including a synthetic field to meet Football NSW National Premier League requirements.
• Creative use of the former Bowling Club site for multiple community, recreational, sporting and social purposes
• Increased vegetation, shade, shelter and seating to reinforce the park setting and create shade and amenity
• Improved connectivity across the site, including formalised north/south access
• Upgraded informal recreation spaces, e.g. playground, multipurpose court and circuit path
• Maintenance of the existing amenities building. [7]

The City of Parramatta Council has a vision to transform the Rydalmere industrial precinct, which fronts the Parramatta River and Victoria Road and extends to Rydalmere Ferry Wharf, into a high-tech and knowledge precinct. Council’s Employment Lands Strategy (ELS) identifies Rydalmere as a Key Employment Precinct, which is undergoing change, restructuring of key industries, and is of a significant scale and size to support urban renewal and increased employment densities. [8]