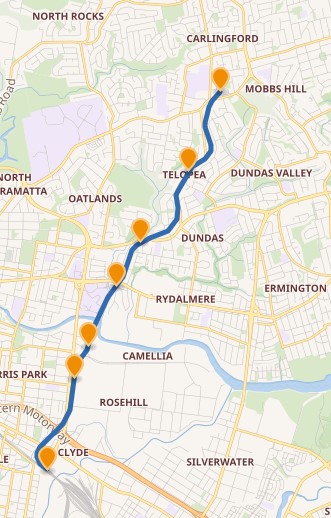 In April 1896, bridge was constructed across the Parramatta River to Carlingford. The line runs north-south between the suburbs of Carlingford and Clyde. Now this railway line known as T6. The railway line’s small catchment, low patronage, short platforms and single track for much of its length i.e. T6 generally operates as a shuttle service.

Most of the line is planned for conversion to light rail as part of the Parramatta Light Rail network and will close to passenger services on 5 January 2020.

Clyde: Clyde railway station and footbridge is heritage-listed. A single track was opened through Clyde in 1855. This line was duplicated in 1856. Clyde railway station initially opened in 1882 as Rosehill Junction. It was renamed Clyde on 19 August 1883. And it was renamed Clyde Junction on 1 August 1901 and back to Clyde in April 1940. Until 1920 this rail line was used as a Down Relief line from Auburn to Clyde and in 1948 it was converted to passenger line.

Camellia today is an industrial suburb on the south bank of the Parramatta River. The land was part of John Macarthur’s land grant of the Elizabeth Farm Estate. With the purchase of the grants of Christopher Magee and Lieutenant William Cummings in 1816, Macarthur gained the complete river frontage between the township and Duck River. Camellia today has Rose Hill Racecourse to its south and the Shell Oil Co. and Duck River to its east. ‘Elinor’ Magee’s 1793 grave, located north of the station on Magee’s grant, marks the site and records her death by drowning in the river.

Silas Sheather (c1820 – 1902) arrived in Sydney aged 14 in April 1839. His father was employed as a gardener by William Macarthur. Silas worked at Elizabeth farm for a time as gardener. He leased three acres of the Elizabeth Farm Estate in May 1852 for 21 years, growing fruit, vegetables and cultivating camellias. Sheather named his nursery Camellia Grove Nursery and purchased the land from the new owners when the estate was sold in 1883. The family is buried at St John’s Cemetery, Parramatta.

Rosehill: Rosehill railway station footbridge is a heritage-listed. Rosehill railway station opened on 17 November 1888 as part of Thomas Bennett’s private railway from Clyde Station to Rosehill. It provided a service to property, subdivisions to the north and better transport options for producers from the fruit growing districts around Baulkham Hills, Castle Hill and Dural. The station was relocated on 14 May 1959 in line with the T6 Carlingford rail line between Clyde and Camellia. The station has two platforms, a four car platform on the Carlingford branch, and a 16 car platform on the Sandown line, which is used by Rosehill Gardens Racecourse trains on selected racedays. Rosehill station was serving between Clyde, Rosehill and Camellia.

Carlingford: Carlingford railway station initially opened on 20 April 1896 as Pennant Hills station, a privately owned railway from Rosehill. After the government took control of and upgraded the station, it was reopened as Carlingford station on 1 August 1901. The station was located adjacent to Carlingford Produce Store.

Dundas: Dundas railway station is a heritage-listed railway station located on the T6 Carlingford line. It opened in 1896 as Kissing Point Road as part of Bennett and Simpson’s private railway – the last privately built and owned station building in N.S.W. In 2006, a severe fire in the station building destroyed the majority of the building’s original fabric. It was reconstructed to the same design in 2007.

Rydalmere: Rydalmere railway station opened on 20 April 1896 as Victoria Road. It was renamed Rydalmere on 1 August 1901. The station was originally located on the western side of the line. It was replaced by a new station on the eastern side over the former goods siding on 28 June 1993.

Telopea: Telopea railway station is a single platform infill station which opened on Saturday 13 June 1925 by Miss Eva Rumsey. It was located on the T6 Carlingford line between Carlingford and Dundas, serving the western Sydney suburb of Telopea. The platform is only four cars long and a pedestrian level crossing was available to reach the other side of the line. Later this train line was named T6.

A number of industrial and car storage sidings have been built on the line. Starting from the Clyde end:

• Pre stressed Concrete Siding: located between Clyde station and the Parramatta Road crossing. Served the railways prestressed concrete manufacturing plant which no longer operates. Currently used to stable an automated track recording vehicle. The junction is on the branch down line with the points facing north (down).
• Shell Refinery Siding: located between A’Beckett Creek and Rosehill station. The siding and junctions points have been removed. Junction was on the branch up line with the points facing south (up).
• Rheem Siding and Loop: located at Rydalmere station. Served the Rheem factory. The siding consisted of a short loop line with junctions north and south of the original Rydalmere station and a siding branch into the factory itself at the southern end of the yard. The loop, factory branch and all junctions have been removed. The new Rydalmere station is now situated on the opposite side of the branch line from the original station and occupies the site of the former loop.
• Electricity Commission Siding: located at the southern end of Carlingford station. The siding was built to move large electrical transformers into the Carlingford Electrical sub-station, one of the major substations distributing electric power to Sydney. The siding and junction points have been removed. The junction was on the run-around loop with the points facing north.
• Carlingford Produce Siding and Loop: a locomotive run-around loop alongside Carlingford station and a siding serving the Carlingford Produce store. The produce store siding joined the run-around loop at the southern end of the station with the points facing south. The loop and siding, together with all their junctions, have been removed.
• Carlingford Car Storage Sidings: a two track siding north of Carlingford station connected to both the branch line and the locomotive run-around loop. The sidings and junctions have been removed. 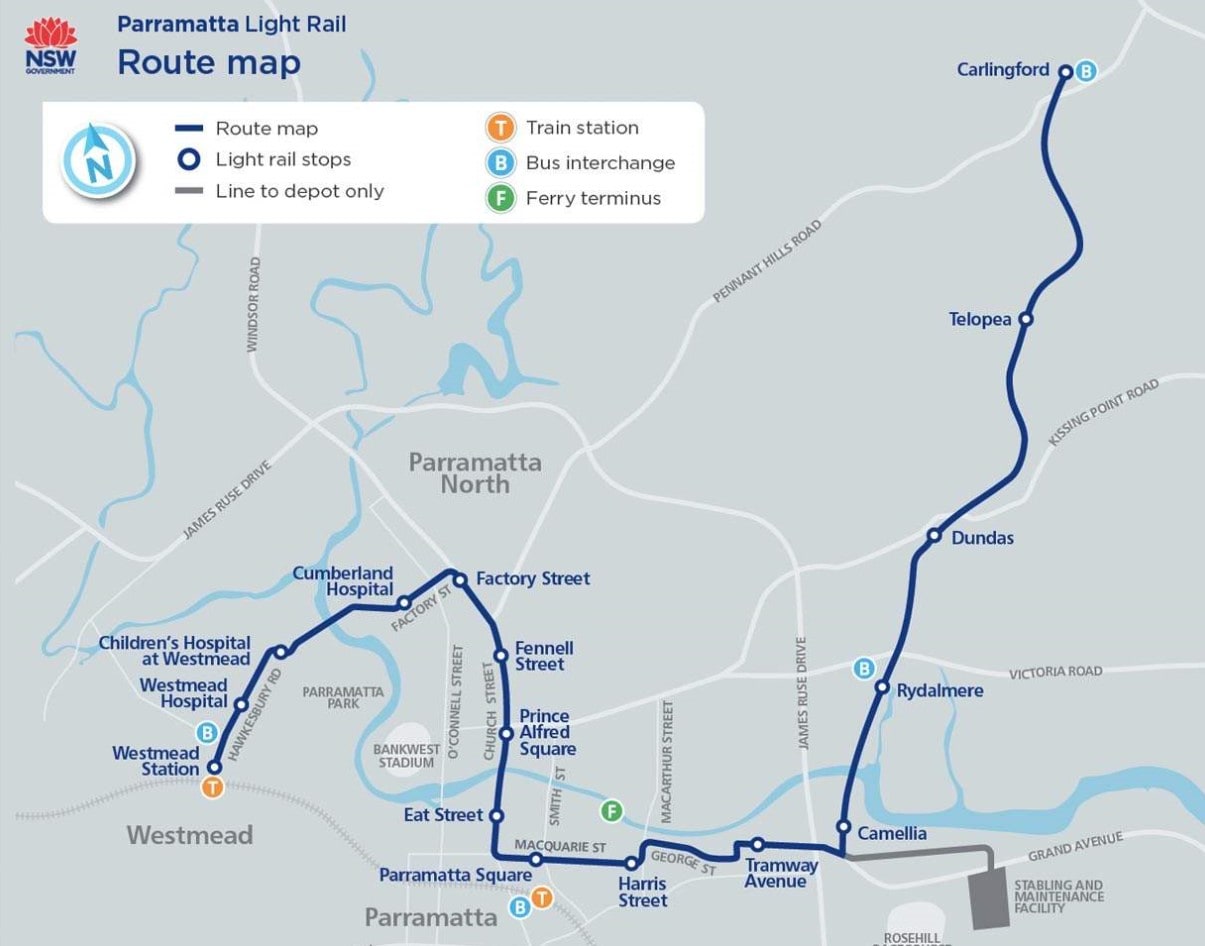