Newington is a suburb of Sydney, It is 16 kilometres west of the Sydney central business district, in the local government area of City of Parramatta. Newington is 2 km west of Wentworth Point, on the Parramatta River, and 1 km north-west of Sydney Olympic Park. The suburb is named after the Newington Estate, a property originally owned by the Blaxland family.

Newington is part of the traditional lands of the Wann clan, known as the Wann-gal. These lands stretched along the southern shore of the Parramatta River between Cockle Bay (Cadi-gal land) and Rose Hill (Burramatta-gal land).

The Wann-gal have lived in the Newington/ Homebush Bay area for thousands of years. The estuary of Homebush Bay provided the Wann-gal with food and resources that they needed as well as a way to travel by water. The Wann-gal clan is said to be part of the Darug language group.

Homebush Bay’s colonial history started very soon after the First Fleet landed at Botany Bay with the area being declared the ‘Flats’ only ten days after the landing. The ‘Flats’ was first settled by Europeans in 1793 when the first land grants were given to free settlers who had arrived on the Bellona. The first men to be granted land in the ‘Flats’ were Thomas Rose, Fredrick Meredith, Thomas Webb, Edward Powell and Joseph Webb. As these were freemen, the land the area then became known as Liberty Plains. 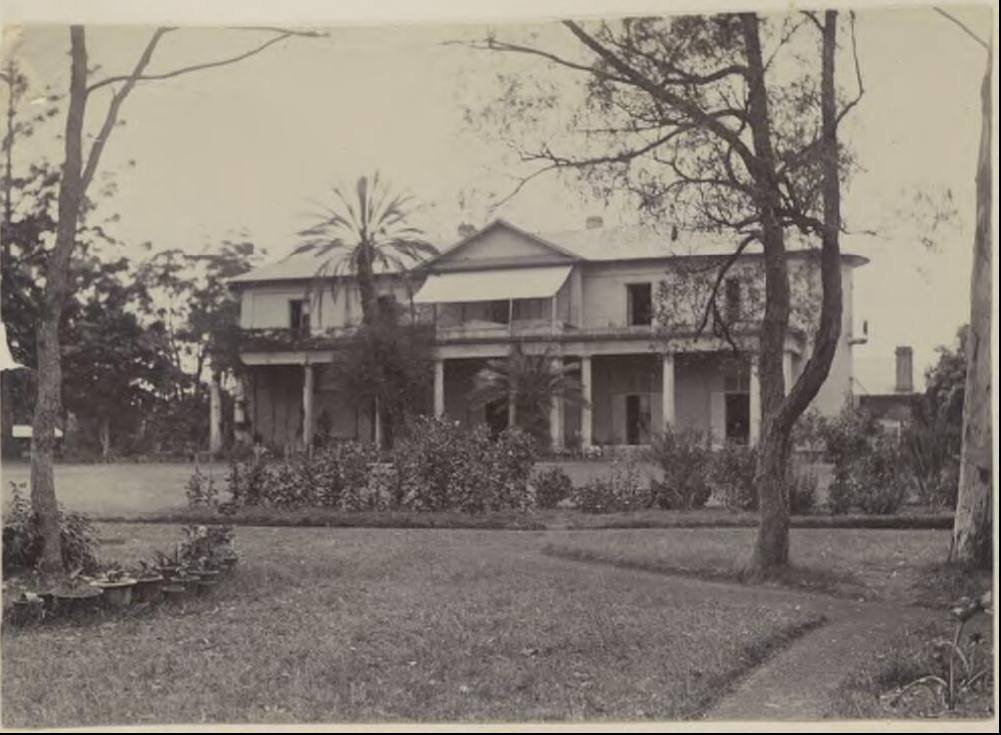 The suburb that is Newington today is inexplicably tied to the Blaxland family and the property they owned and named. The suburb is partially located on the original estate.  And while some of the original features of the Newington Estate are not included in the modern suburb they are historically important to its development.

John Blaxland was a landowner and merchant who in 1807 acquired a large amount of land (520 hectares) including grants from Waterhouse Farm, Shortland Farm, Isaac Archer and Samuel Haslam. This land he named Newington Estate. Blaxland set up salt pans along the Parramatta River and was able to produce up to 8 tons of salt each week in 1827 for Sydney. The Blaxland Family held this land until the 1860s. By that, time there was also a tweed and flourmill there as well as cattle grazing, logging and coal mining exploration.

The estate was leased to the Methodist church in 1860. Newington House the estates grand residence was home to Newington College from the schools beginnings in 1863 until it was moved to Stanmore in the early 1880’s. The school was of the Wesleyan denomination and was the first Australian school to play rugby and to hold an athletics carnival. The college also has the longest running Cadet Corps in Australia.

The Newington Estate was first offered to the Government for use as an Asylum for the Insane in 1874. The Government did not accept this offer, until years later.

The Government acquired about 19 hectares of land which included Newington House. This was in the mid 1880’s.  The first buildings for an Aged Woman’s Asylum were established on the site in 1886 to house 300 patients. Two wards, known as the Margaret Catchpole and Caroline Chisholm buildings were among the first erected. Moreover, by 1890 there were 450 patients at Newington. At this time, the hospital was categorised as a state asylum for dependent adults’ with infirmity or illness of ‘incurable character’.

In 1968, the property was moved to the ownership of the Department of Prisons. Newington House, the Blaxland family’s home and the Chapel of St Augustine, the family’s chapel, remains to this day. The house is now part of the Silverwater Correctional Complex. 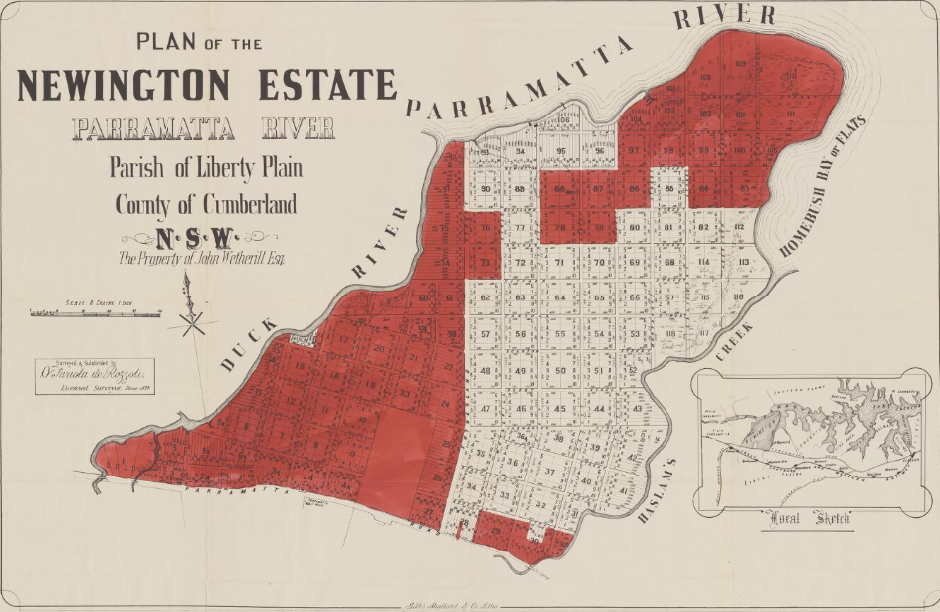 The estate was sold to John Wetherill in 1877. In 1878, Wetherill registered a subdivision plan for the entire 520 hectare Newington Estate. It comprised of an extensive grid layout, of some 114 lots, which extended well into the mud flats and mangroves of Wentworth Bay and Homebush Bay. In 1906 and 1909, Wetherill further subdivided his property as Riverside Heights, with the first allotments sold in that year. The project was largely unsuccessful, with only a few lots being sold. However, the layout of the western part of the Newington subdivision remains obvious in the current street pattern and street names. 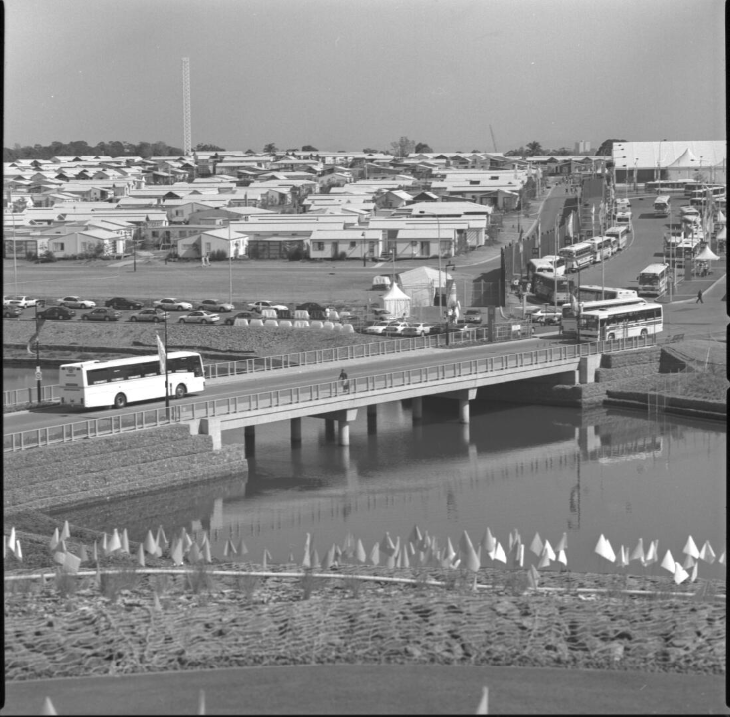 Newington was home to the athlete’s village for the 2000 Sydney Olympic Games. The land was close to the Homebush Bay sporting area. The village was made up of 900 townhouses and 700 apartments as well as mobile homes. This was over a 90-hectare area. Newington was the largest solar-powered suburb to be built in the world.  The village also used recycled water technology and both sustainable power sources are still used today. After the Paralympic Games were completed, the area was converted into the suburb it is today.

Today Newington is a small suburb made up of approximately 6400 residents. It is a young and multicultural suburb with an average age of thirty-six and a population with an ancestry of English, Chinese and Korean. Forty-nine percent of the population are born overseas with forty-seven percent of them having university qualifications.

The tree and plant life in the suburb includes species that make their home in the neighbouring Millennium Parklands. This has led to a strong biodiversity with birds such as the red-rumped parrot given a greater chance of survival. Newington has its own shopping centre and business park.

Newington Primary School buildings were used as the medical and rehabilitation centre for the athletes during their stay in the Olympic Village.

Lea Goldstein
This is a beautiful suburb to visit.
It allows easy access to wonderful parklands and a vibrant people friendly river. It has a pleasant and accessible retail hub with
wonderful caring staff in local pharmacies. I love to have a coffee here!
Lea Goldstein
Thank you