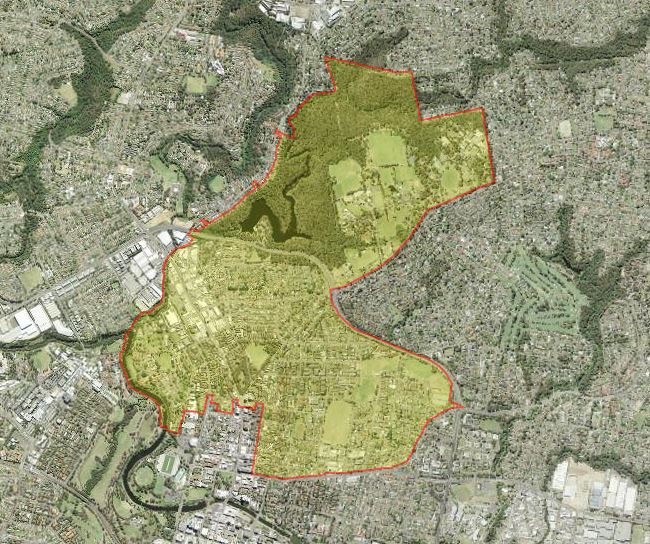 For thousands of years the land around North Parramatta was home, hunting ground and sacred meeting place for members of the Burramattagal clan of the Darug people. The Burramattagal have a close connection with the river, from which they caught fish, eels, and other food. [1] 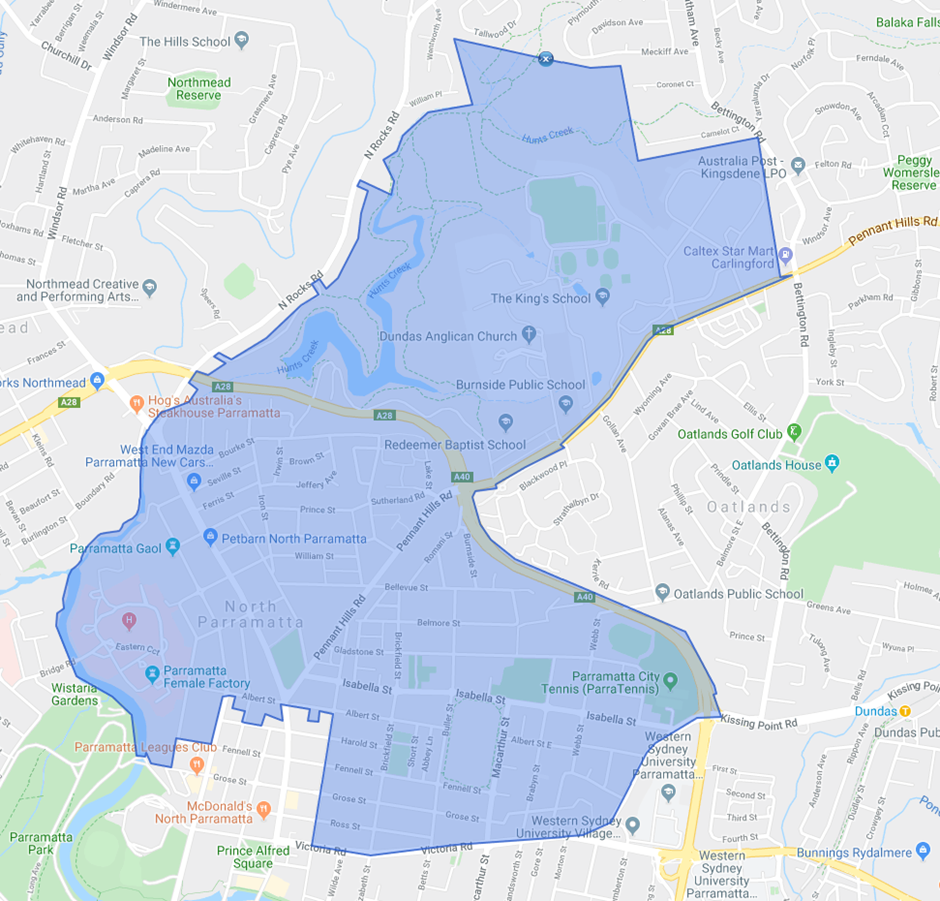 When Governor Arthur Phillip created the township of Parramatta, a large area to the north of the town was reserved for future use. The North Parramatta Cumberland Hospital Precinct area was the site of the earliest land grant made in North Parramatta. This was made on 29 November 1792 to Charles Smith who was granted 30 acres of land on what is now the Cumberland Hospital Precinct. Smith was transported to Australia, arriving in June 1790, but became a free settler after receiving both an Absolute Pardon and his 30 acre land grant. Sometime between 1803 and 1806, Samuel Marsden purchased Smith’s land with the aim to construct his own mill. Marsden also acquired additional land between the northern part of Smith’s grant and the Darling Mills Creek. The other grant which occupied a large part of the site, was the 105 acre grant to Governor William Bligh which extended down to the site of the Kings School and included the site of the first botanical garden. [2]

St. Patrick’s Roman Catholic Cemetery, on the corner of Church Street and Pennant Hills Road, North Parramatta, is Australia’s oldest Catholic cemetery. The earliest headstones date from the 1820s, and the cemetery contains approximately 2000 graves. As a place of burial that separated Catholics from the early Protestant establishment, this cemetery marks a significant milestone in the development and growth of the Catholic community in Australia. [3] The cemetery was closed for new burials in 1972. All maintenance, headstone, repairs and donations enquiries are managed by the City of Parramatta’s Open Space & Natural Resources 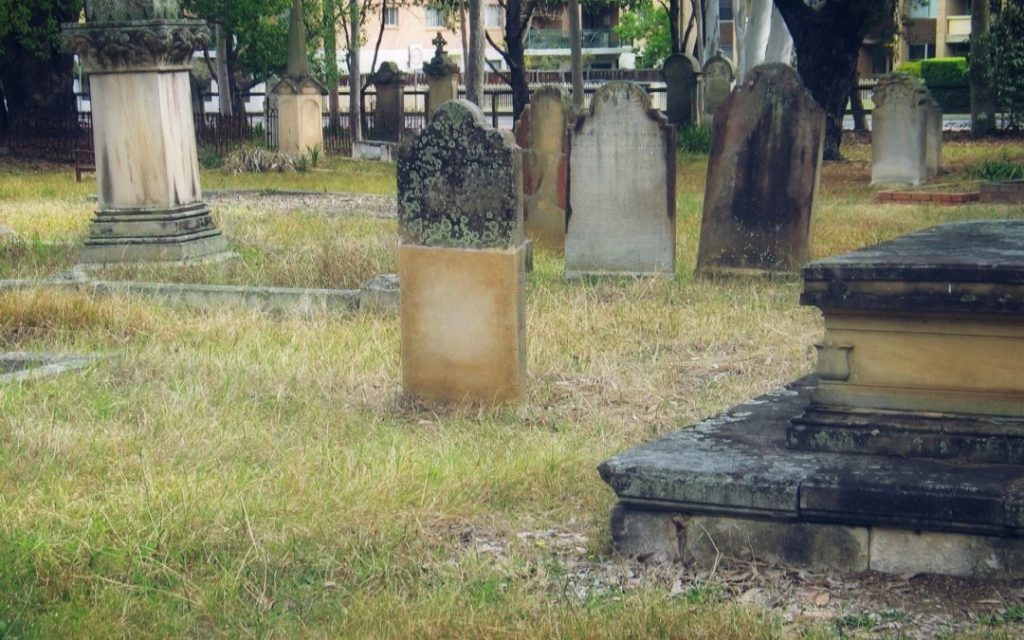 North Parramatta is dominated by some of the most significant heritage sites in New South Wales, with one of the most important being the medical precinct on Fleet Street. Construction of the Parramatta Female Factory began in 1818 and Governor Lachlan Macquarie laid the foundation stone for the second Female Factory on July 9, 1818. The First Female Factory was in Prince Alfred Square 1803-1821. When completed in 1821 the Factory acted as a place where convict women, often with children waiting for assignment, and emancipated women, received refuge, medical attention and training. The Factory was in fact a combination of prison, school, home and place of manufacture. The Factory became the first purpose built destination for all convict women sent to colonial Australia and a model for all other female convict sites in Australia. In 1847 the need for the Factory ceased to exist and in 1848 the Factory became the Lunatic Asylum.

From 1848 to 1878 the site became the Parramatta Lunatic Asylum. In 1858 the Parramatta Asylum is given a total of 29 acres to the south side of the river and the land that would become Wistaria Gardens. In 1878 the Parramatta asylum was renamed the Parramatta Hospital for the Insane. In 1970 the patients were moved out, the old buildings were then demolished, and in 1983 the site was again renamed to Cumberland Hospital.

At 1 Fleet Street North Parramatta stands the first orphanage for Catholic children, the Roman Catholic Orphan School. Construction began in 1840, and by 1844 the school was occupied. This was the result of a growing demand as there was an increased number of Irish Catholic convict arrivals in the 1820s to the mid-1830s. By the 1870s the school had 318 children. When the Orphan School was closed in August 1886 there were 41 children living there. In May 1887 the Roman Catholic Orphan School site opened as the Girls Industrial School (1887 – 1912) by the Department of Public Instructions. It accommodated 160 to 200 girls at a time. In 1912 the school was renamed the Parramatta Girls Training Home and the name was changed to Girls’ Training School about 1946. The school was meant to act as a place of reform for destitute and vagrant girls. The school was closed in 1974 and replaced with Kamballa. Kamballa was created by the Department of Youth and Community Services to train girls with behavioural or emotional issues between the ages of 15-18. Also created was Taldree, a boy’s shelter. In 1980 the Norma Parker Detention Centre was established in the former Parramatta Girls Home building. Taldree remained under the control of Department of Youth and Community Services and used for staff training. Since 2010 the Norma Parker Centre ceased being a detention centre. (4)

All Saints Cemetery is located at 56 Fennell Street, Parramatta and was established in 1843. The cemetery is the resting place of many significant Parramatta people including Gregory Blaxland and Robert and Martha Moxham, and has around 1500 unmarked graves which are mainly for the inmates of the Parramatta Lunatic Asylum and other benevolent institutions.

Parramatta Dam, which is located within the heritage listed bushland and recreational area Lake Parramatta Reserve on Hunt’s Creek, was constructed to meet the demands of the Parramatta residents for quality drinking water. Work commenced in 1851, and by 1881 fresh water was being piped directly to Parramatta. The dam was in use until 1916, and in the following decades the reserve was a popular picnic and swimming area. Parramatta Dam holds the title of being the first large dam to be constructed in Australia; the first arch dam to be built in Australia and the only arch dam built of masonry blocks and Roman cement. [5]

The Kings’s School at 87-129 Pennant Hills Road North Parramatta, is Australia’s oldest independent school, having been established in 1831. The school originally opened in George Street Parramatta in the building now known as Harrisford House, but within a few years moved to a new building on the north bank of Parramatta River with frontage to O’Connell Street . The school moved to its current location in North Parramatta in August 1968. The property stands on part of the former Gowan Brae site, which had been the home of the significant Parramatta businessman and philanthropist, James Burns.

Parramatta Gaol was Parramatta’s third gaol, and Australia’s oldest serving gaol until its closure in 2011. Construction began in 1835 and was completed in 1842. This heritage listed property at 73 O’Connell Street North Parramatta, was built by the builders James Houison and Nathaniel Payten, during the time of Governor Bourke and Governor Gipps. Also formerly known as Parramatta Jail and now known as Parramatta Correctional Centre, ownership of the building was transferred to the Deerubbin Local Aboriginal Land Council in 2015.

Burnside Presbyterian Orphan Homes, on Pennant Hills Road at North Parramatta, were children’s homes founded in 1911 by Sir James Burns.  The Burnside Museum at 9 Blackwood Place North Parramatta has interactive displays, first-hand accounts from children who attended the home, and tours, all to commemorate the voices of the children that were part of this history.

Lake Parramatta was reopened for public swimming and water recreation activities in January 2015. This initiative was launched by the Parramatta River Catchment Group. In addition to swimming in the lake fully patrolled by lifeguards, you are also able to hire a boat, experience walking tracks in the Lake Parramatta Reserve, lunch at Lake Parramatta café or enjoy a BBQ, and explore evidence of the original occupation by the Aboriginal Burramattagal clan.