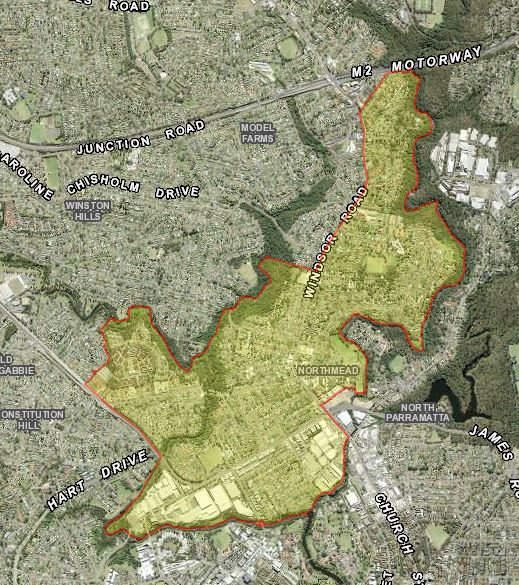 European history of the Parramatta District began in April 1788 with an exploration party led by Governor Arthur Phillip, which travelled along the Parramatta River to the vicinity of The Crescent and decided upon the site of the future town of Parramatta. By November that year, the governor had established an outpost consisting of convicts and marines on the site. The settlers observed a landscape dominated by tall open forest now known as Cumberland Plain Woodland with area of mangroves, saltmarsh and wetlands along the riverbanks with an abundance of wildlife. [2]

For thousands of years the land around Parramatta was home, hunting ground and meeting place for members of the Burramattagal clan of the Darug people. European settlers cleared the land seriously diminishing the supply of native plants and animals on which Aboriginal people relied for their existence. [3]

The area now known as the suburb of Northmead was once part of an area known as the Governor’s or Parramatta Domain, which was set aside by Phillip in the early years of the colony. The area was not gazetted until the arrival of Governor Lachlan Macquarie in the colony in 1810. Amounting to 2,000 acres (809 hectares), the Domain extended out from Government House, Parramatta and was bounded to the east by Windsor Road, Toongabbie Road (now Junction Road) to the north, the Western Road to the Hawkesbury district was the western boundary. [4] 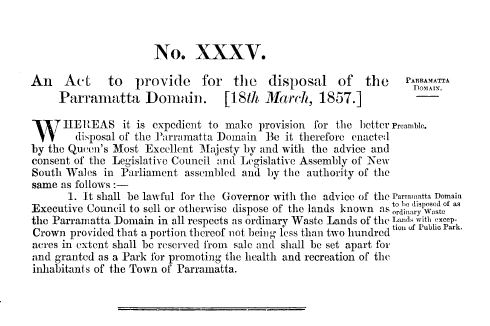 By the late 1850s, the large Domain was becoming too expensive to maintain and the decision was made by the Governor of NSW, Sir William Denison break up the area into three main sections. [5] An area of 200 acres (80 hectares) was set aside for a public park adjoining Government House, Parramatta. The western portion of the Domain became Westmead and the northern portion, Northmead. The new names were a blend of their relative locations and the use of the suffix ‘mead’, an archaic word meaning meadow. Land was also allocated for the Model Farms, now known as Winston Hills and the Westmead Showground which later became the site for Westmead Hospital. The remaining portions of land were made available for subdivision and sale as farming and residential lots. [6]

Settlers including Henry Alderson, Robert Eather, Samuel Larken, John Raine, Samuel Barber, Thomas Day, Francis Oakes, Charles Klein and William O’Brien established large orchards, market gardens and mixed farming properties in the area. Their legacies remain reflected in the street names of the district. John Pye, one of the early landholders in the area once owned most of the land from Darling Mills Creek to the crossroads at Baulkham Hills. Some large poultry farms were also established such as Hemsworth’s ‘Wyandotte Grange’ in Klein’s Road. [7]

Transport by Tram and Train

Farmers successfully lobbied for a tramway for the efficient transport of produce from their farms to the markets in Sydney. The line which carried both passengers and goods opened in August 1902 and ran from Parramatta Station, over the Lennox Bridge and thence to Baulkham Hills via Windsor Road, opening up further opportunities for subdivision and development of the area. In addition, a light rail line to Castle Hill opened in January 1923 and the station near Darling Mills Creek was designated ‘Woollen Mills’. Several months later this station was renamed Northmead. Both lines proved to be financially unviable and were closed by 1932 due to the growth in road transport, bus services and the reduction in the production of fruit for the export market. [8]

Subdivision of farming land in the Northmead area commenced in about 1911 commencing the shift in landuse away from agriculture.

Advertisement from Rawlinson & Co. for the Northmead Estate described as the “pick of Parramatta’s new suburbs”. Cumberland Argus and Fruitgrower’s Advocate. 14 Nov 1914. p. 7. Retrieved on 14/02/2020 from https://trove.nla.gov.au/newspaper/article/85957236

The large residential subdivision known as the Northmead Estate was advertised for sale in November 1914. Comprising seventy-five lots, the blocks had frontages to Brien’s Road, Klein’s Road and Northmead Avenue and were conveniently located near the tramline. With a growing suburban population, local residents applied for the provision of a post office, which was initially set up in the home of Mrs. Lizzie Cleburne in October 1914. The name ‘Northmead’ was adopted when the official post office was opened in January 1916. [9]

As the population continued to grow during the 1920s there was also a need for the provision of a public school. Northmead Public School was constructed on land donated by the Moxham family and the facility opened in 1924. [10]

The suburb of Northmead has also been the location of many types of industry over the years. In the 19th century, deposits of quality sandstone for building purposes was quarried in the area. Evidence may still be seen of Moxham’s Quarry operations behind Northmead Bowling Club between Windsor Road and Northmead Gully and along a section of Toongabbie Creek near the Hammers Road Bridge. The Charles Herbert Reserve in Whitehaven Road and Hartland Street was also the site of an extensive quarry. [11]

The Darling Mill was one of the earliest commercial operations in the area. John Raine was granted land on Darling Mills Creek in 1825 and the steam flour mill was completed on the site in 1826 by Nathaniel Payten and Robert Gooch. The mill had several owners who continued with the flour milling business until 1870 when John French commenced the manufacture of tweed cloth on the premises. From 1911, the mill was owned and operated by Sydney Woollen Mills. The factory continued to operate until closure in 1974 and most of the building except for a portion of the façade was demolished in the 1980s. [12] 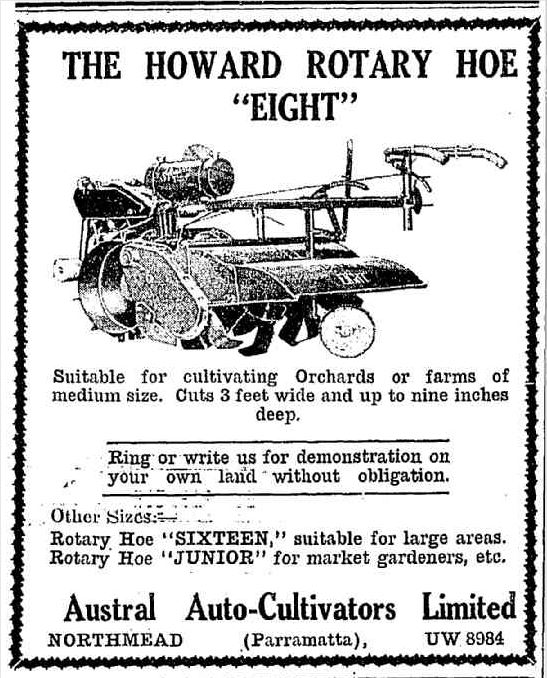 Advertisement for the Howard Rotary Hoe manufactured at Northmead. Cumberland Argus and Fruitgrower’s Advocate. 11 February 1932, p. 14. Retrieved on 20/02/2020 from https://trove.nla.gov.au/newspaper/article/105934290

In 1926, Arthur Clifford Howard opened his factory near the junction of Windsor and North Rocks Road, Northmead. Howard is credited with manufacturing the first Australian built tractor and by 1966 the works had produced over 100,000 agricultural implements with a workforce numbering almost 1,000 men. [13] Other major industrial developments have included the large beverage company Coca Cola Amatil which set up operations in Briens Road in 1972. [14]

Northmead continues to combine residential, commercial and light industrial landuse zones. Future trends in the suburb include the growth in medium and high density residential developments.

[2]          History of Waterways. Retrieved on 30/012020 from https://www.cityofparramatta.nsw.gov.au/recreation-environment/waterways/catchment-management/history-of-waterways