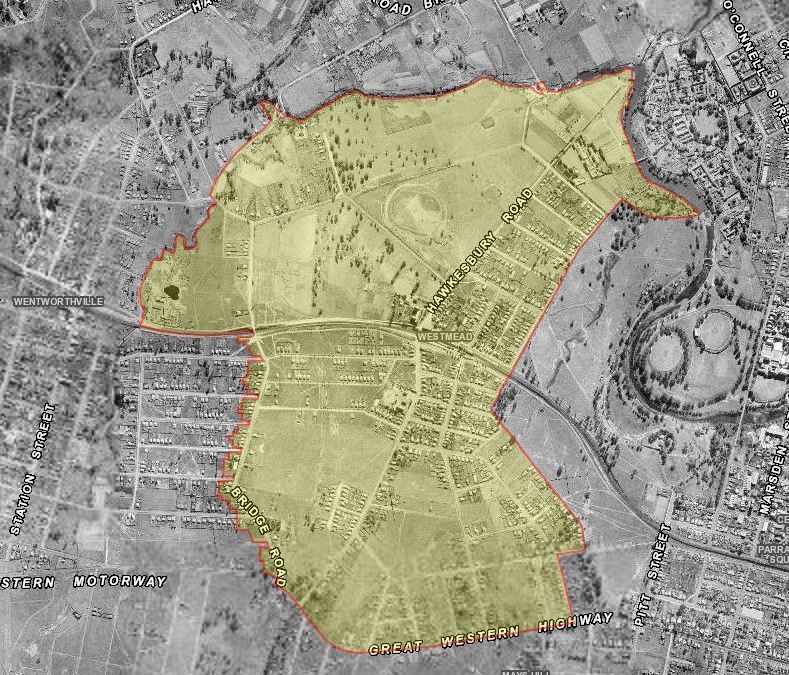 The population of the suburb has grown from just over 10,000 persons in 2001 when 45% were Australian born with small numbers of people from India and China. [1] By 2016, numbers had increased to over 16,000 with 25% born in India, 25% in Australian and some representation by people from China, Sri Lanka. Philippines and Nepal. [2] Reflecting the change in demographics of the suburb there has been a growth in Indian style grocery stores and restaurants in the area.

European history of the Parramatta District began in April 1788 with an exploration party led by Governor Arthur Phillip, which travelled along the Parramatta River to the vicinity of The Crescent and decided upon the site of the future town of Parramatta. By November that year, the governor had established an outpost consisting of convicts and marines on the site. The settlers observed a landscape dominated by tall open forest now known as Cumberland Plain Woodland with area of mangroves, saltmarsh and wetlands along the riverbanks with an abundance of wildlife. [3]

For thousands of years the land around Parramatta was home, hunting ground and meeting place for members of the Burramattagal clan of the Darug people. European settlers cleared the land seriously diminishing the supply of native plants and animals on which Aboriginal people relied for their existence. [4] 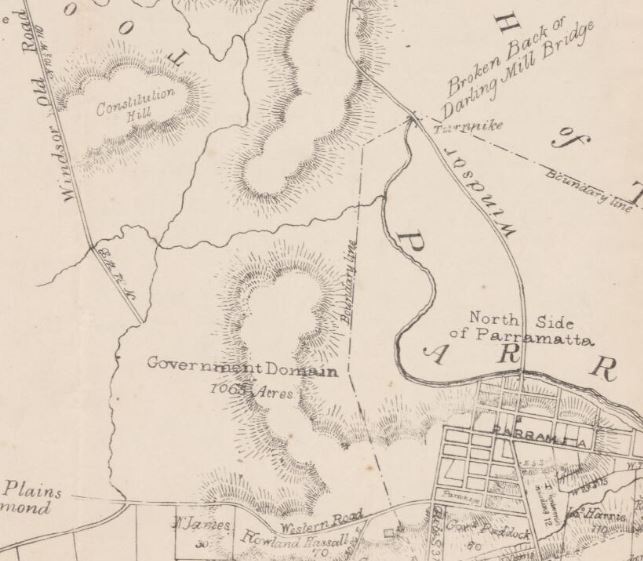 Excerpt from Parish of St. John, County of Cumberland map showing the location of the Governor’s or Parramatta Domain before 1857, NSW Department of Lands. Retrieved on 23/02/2020 from National Library of Australia http://nla.gov.au/nla.obj-229950258/view

The area now known as the suburb of Westmead was once part of an area known as the Governor’s or Parramatta Domain, which was set aside by Phillip in the early years of the colony. The area was not gazetted until the arrival of Governor Lachlan Macquarie in the colony in 1810. Amounting to 2,000 acres (809 hectares), the Domain extended out from Government House, Parramatta and was bounded to the east by Windsor Road, Toongabbie Road (now Junction Road) to the north, the Western Road to the Hawkesbury district was the western boundary. [5]

By the late 1850s, the large Domain was becoming too expensive to maintain and the decision was made by the Governor of NSW, Sir William Denison break up the area into three main sections. [6] An area of 200 acres (80 hectares) was set aside for a public park adjoining Government House, Parramatta. The western portion of the Domain became Westmead and the northern portion, Northmead. The new names were a blend of their relative locations and the use of the suffix ‘mead’, an archaic word meaning meadow. Land was also allocated for the Model Farms, now known as Winston Hills and the Westmead Showground which later became the site for Westmead Hospital. The remaining portions of land were made available for subdivision and sale as farming and residential lots. [7] 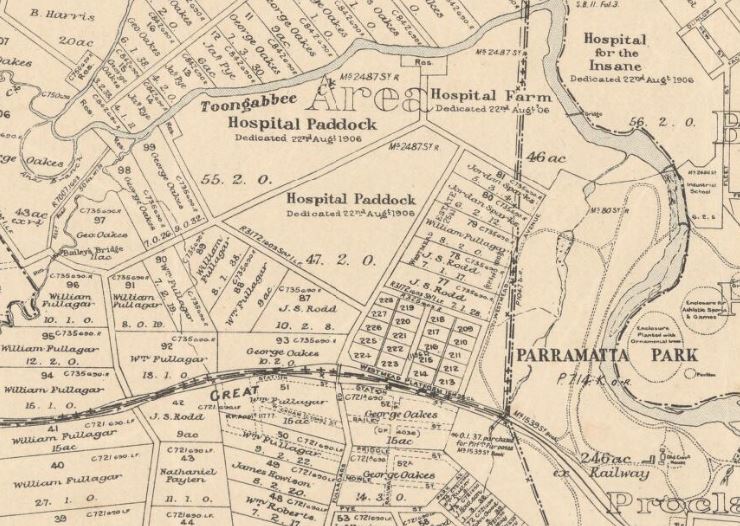 Large tracts of the western part of the Domain (now Westmead) were purchased by William Fullagar, George Oakes, Andrew Payten and James Houison. Unlike the fertile land around Northmead, Westmead was considered too poor for farming. [8] ‘Nairn Cottage’ was constructed in 1862 on Hawkesbury Road by Houison as his country residence. Several years later, Andrew Payten built his home ‘Deskford’ on the adjoining block. [9]

During the latter part of the 19th century, growth was slow in the Westmead district. Although the Main Western Railway Line had passed through the district since 1860, a platform for the residents of Westmead was not constructed until 1883. [10] In 1922, a short-lived branch line left the mainline at Westmead and travelled through Baulkham Hills to Rogans Hill for the transport of passengers and produce from the Hills District. A short distance from Westmead, the Mons Road platform was opened in January 1923. This line proved to be financially unviable due to competition with road transport and closed 1932.

The opening of the platform at Westmead engendered residential development in the district. In September 1884, land was advertised for sale in “The new suburb of Westmead” by the Sydney firm of Mills and Pile. The promotion was aimed at working men and their families describing the district in glowing terms with “small allotments, on such terms as ill come within the means of struggling respectable working men, fathers of families, and others…employment is abundant…every inducement for a family to live in this healthy district.” [11] 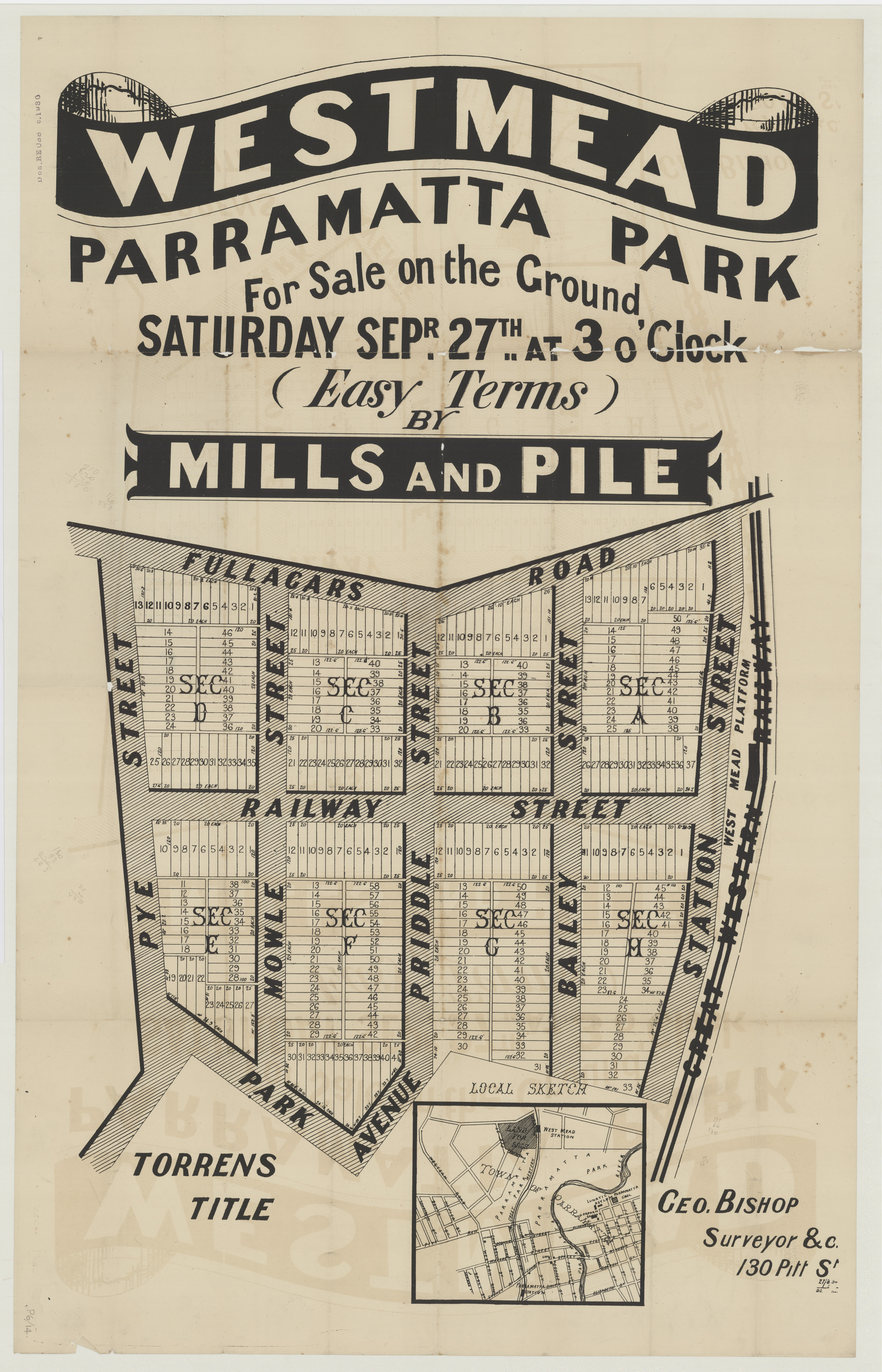 Idyllic scene from the brochure for the ‘New town of Westmead’ advertised for sale by Mills and Pile in September 1884 showing the idyllic surroundings of Westmead. Retrieved on 21/8/2019 from City of Parramatta Research Library Vertical File, VF1221 – Westmead.

St Vincent’s Boys Home in Westmead was opened on Hawkesbury Road in 1896 by the St. Vincent de Paul Society and the Marist Brothers. [12] The institution was closed in 1991 and the buildings have been re-purposed and extended as the Westmead Campus of the Western Sydney University which opened in 1998.

By 1917 there were sufficient children in the area to warrant the provision of a public school. The new Westmead facility opened in 1917 in the local Church of England hall and then in 1920 school buildings were provided by the NSW government. [13]

In the 1940s the population of the suburb increased substantially with the development of a number of residential subdivisions by the NSW Housing Commission. There was some opposition from the established residents of the district who voiced their concerns to the local newspaper stating that the scheme was attracting undesirable families “with as many as ten children” and the density of the development was resulting in “houses so close that the eaves almost touch.” [14] 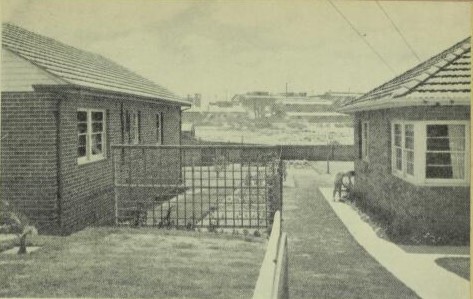 The fears of existing residents were unfounded as the commission adopted certain standards for the development of all sites. The streets were well-formed, kerbed and guttered and the layout of the suburb was carefully planned. A minimum lot size, frontage and distance between the dwellings was planned to afford the best possible environment “for the future citizens of these new communities”. Areas were also set aside in each development for public recreation. [15]

From 1955 to 1968, the showground was the home of the exciting and popular Westmead Speedway which over the years included competitions for go-carts, hot rods, stock cars, women’s events and midget speed car racing. Charity races were held with celebrity guest drivers of the 1960s including Little Patti, Brian Henderson, Col Joye and John Laws. [17]

The Development of Westmead Hospital

Parramatta District Hospital which was located in Marsden Street, Parramatta had served the population of the district from its establishment by the colonial government in 1818. The growing population of the Parramatta district and of Western Sydney as a whole especially during the latter part of the 20th century put an ever increasing strain on the services and facilities of the exiting hospital. A new site of about 100 acres (40 hectares) was procured at Westmead for the construction of the new hospital, initially known as the Westmead Centre. [18]

In the vicinity of the new hospital, Marsden Hospital for children with an intellectual disability had been opened in 1969. This facility closed in 2016 and the property is now part of the Westmead Hospital site.

In 2018, Westmead Hospital celebrated 40 years of service as the principal hospital for the population of Western Sydney and has over the years has become synonymous with the suburb. The facility will continue to grow and provide diverse and essential medical services for the growing population of Western Sydney. [19] The trend towards medium and high-density housing will see the suburb continue to grow in population into the future.

[3]          History of Waterways from https://www.cityofparramatta.nsw.gov.au/recreation-environment/waterways/catchment-management/history-of-waterways