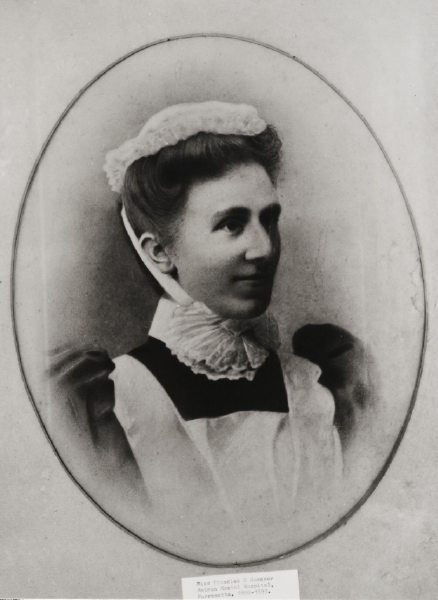 Following the retirement of Mrs Burn, Miss Frances Georgiana Spencer[2] was appointed Matron of Parramatta Hospital for the Insane on 1 September 1892[3] by the Governor and Executive Council at an annual salary of £160.[4] Matron Spencer was born in 1862 in Birmingham, Warwickshire, England. She was the first formally trained matron of the hospital, having been trained at St. Bartholomew’s Hospital in London in August 1887 to May 1891 under the Nightingale system and had worked as a Sister at Carrington Convalescent Hospital from September 1891 to February 1892. She resigned in July 1893 from Parramatta, to take up the position of matron at the Thomas Walker Convalescent Hospital in Concord West.[5]

In June 1899, Miss Spenser was intimately involved in the establishment of the NSW Trained Nurses Association which by October became known as the Australasian Trained Nurses Association (ATNA). She was also appointed to the first Examining Committee of the ATNA that year. The ATNA established and maintained a register of nurses[6] and did not admit “mental nurses” until 1911 when the first registration examination of mental nurses occurred in July 1911 with 12 nurses passing.

Note: Formal training of nurses and attendants at Parramatta Hospital for the Insane began in 1890-91 and was observed by the Inspector General of the Insane in 1893 as being well established.