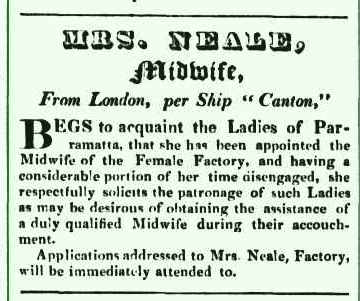 Mrs Neale arrived on the 8 September 1835, in the colony on the ship the Canton.

Mary was an assisted immigrant and was employed as the Female Factory midwife when she arrived. While it is not known if she had official training for her role she may have and at least had experience working in London.

The advertisement above is from November 1835, in it Mary is telling the colony of her employment and readiness to assist ladies outside of the Factory. Mary worked both as a government employee, for this she was paid fifty pounds, light and fuel,  and as a private practitioner. Mary left the employ of the Factory in March 1837 and began work in Sydney, King Street.