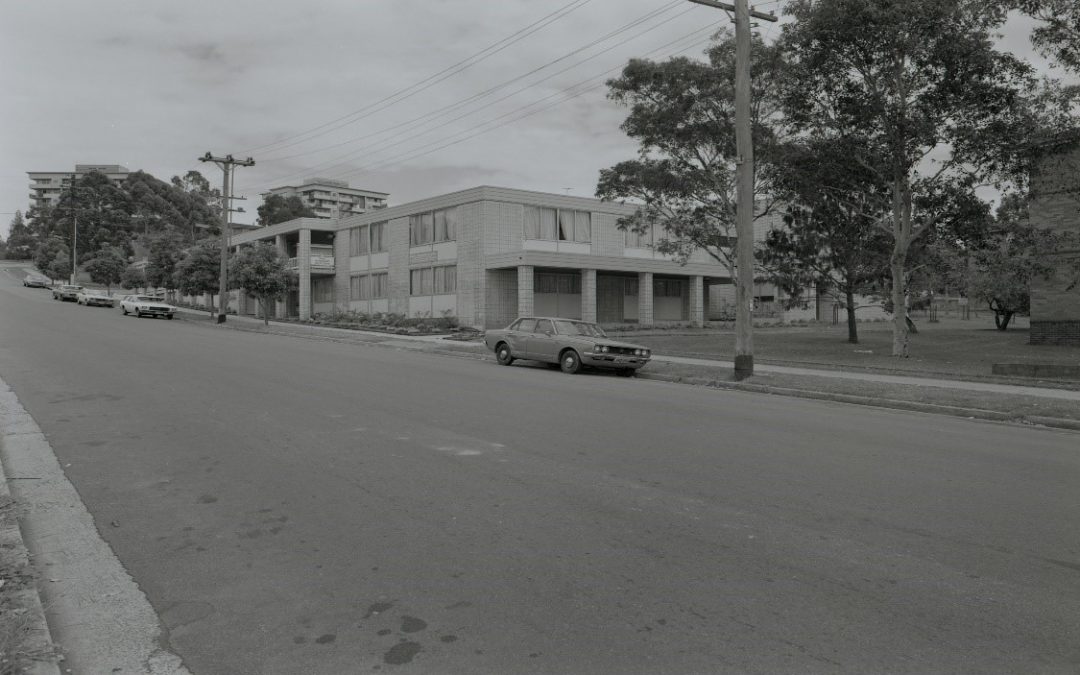 Dundas Branch Library was opened on Saturday 5 September 1959 by the Mayor, Alderman Eric Arthur Mobbs. The library opened in the former Dundas Council Chambers at 156 Marsden Road Dundas, with an initial stock of more than 1000 books. Around 100 people attended the opening ceremony. At the opening ceremony, Alderman Mobbs paid tribute to the work of the Ladies’ Guild which he said “had been doing a magnificent job in carrying on library work in the district since 1954”. [1] A Children’s Library also opened and was located in the front room of the Dundas Town Hall. The former Dundas Town Hall consisted of a hall on the southern side of the former Council Chambers building. The Children’s Library was open Monday to Friday 3-5 p.m.

The suburb of Dundas began to grow quickly after orchard land was subdivided in 1902 and 1905. In 1955, the Housing Commission began to subdivide an additional 300 acres in Dundas. [2] With the subsequent growth of one of the largest housing estates in Sydney, and a growing demand for Parramatta City Council to provide a broader range of community services and facilities, discussions began around the possibility of creating a new community hall and a larger and better-equipped library. The Dundas Valley Progress Association, an association formed in 1956 as a non-political organisation to work towards the betterment of the district, had a new library with a community hall as one of its highest priorities. With its rapidly growing membership, this association’s voice proved very influential, and solidified the support for a new library.

Parramatta Council Valuation books from the 1950s confirm that the site on which the current Dundas Library is located at 21 Sturt Street, Telopea, belonged to the NSW Housing Commission. In an article from The Cumberland Argus dated February 7, 1962, it was reported that the NSW Housing Commission would be dedicating land to Parramatta Council for construction of a new library and community centre on Sturt Street, near Telopea shopping centre. The Commission had certain conditions in releasing the land which included: A library must be constructed within 5 years; plans for the building must be submitted for the Commission’s approval; return of the land to the Commission if the building covenant is breached; and finally that Council is responsible for all legal and surveying costs involved in the transfer of the land. [3]

Mr D.J. Mahoney, a Member of the Legislative Assembly for Parramatta stated:

I feel that now the Commission has agreed to make the land available, Parramatta Council will move quickly to complete the project. [4]

Parramatta Council had originally planned to use the proceeds from the sale of the School of Arts building to create a new library.

On Saturday 6 April 1963, at 3 p.m., the new Dundas Valley branch of the Parramatta City Library at Sturt Street, Telopea, was opened by the Mayor, Alderman Reginald Van Nooten. On the 23 August 1963, this site was officially transferred to Parramatta City Council. 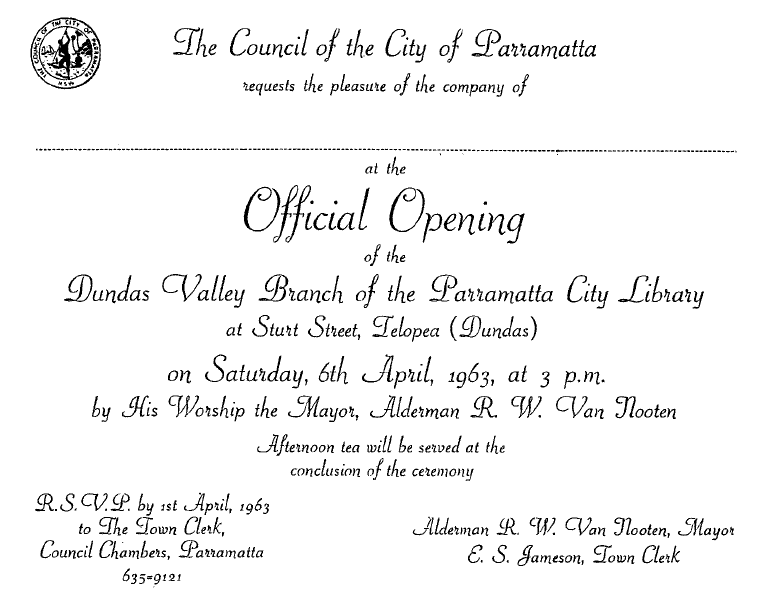 In 1992 Dundas Library began using computers, in 1993 the library was extended and refurbished, and in 2013 a grant was received for a Toy Library.