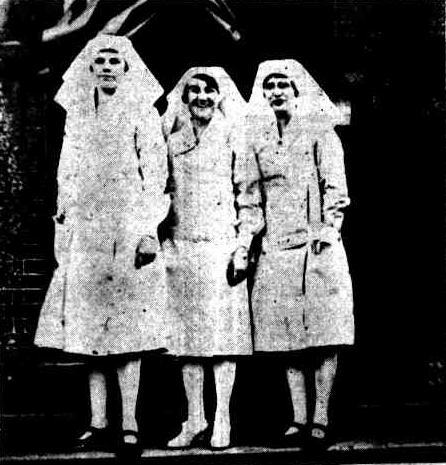 From left to right: Sisters Smairl, Corderoy and Butler, a trio of popular nurses at the Parramatta District Hospital, 1929. Image: The Cumberland Argus and Fruitgrowers Advocate [1]

Lilian Gladys Smairl, who was born on the 11 January 1898, began her nursing career training at the Royal Prince Alfred Hospital, Sydney. After working there for almost 6 years she was appointed to Parramatta District Hospital as a Sister in February 1924. In August 1936, Parramatta Hospital announced in its annual report that a new X-ray building with new equipment at the cost of almost 2,800 pounds had been completed. [2] Lilian, who had completed a three-month X-ray course at Prince Alfred Hospital was put in charge of the machine and paid an extra 10 shillings a week. [3]

Lilian was very independent, and by the 1930s was driving a car. She bought a Morris Cowley car with fellow nurse Matron Morse for 40 pounds, which required sand bags in the passenger seat to keep the car balanced when only the driver was in the car. [4] Lilian, who was described by the Sydney afternoon newspaper The Sun as having a magnetic personality and sympathetic nature, was also a keen golfer. Before her departure to work overseas Lilian had played golf for eight or nine years from a handicap of 19 at the Oatlands Golf Club on Bettington Road, Oatlands. She was one of the club’s earliest women supporters. [5]

In March 1937 Lilian left Parramatta Hospital after having worked there for 13 years, and migrated to England to enlist in the Queen Alexandra Royal Naval Nursing Service. She was registered by the London Royal College of Nursing on the 24 September 1937, and stationed at the Royal Naval Hospital in Chatham Medway, England. [6] Whilst she was stationed at the Chatham Naval Hospital, World War Two was declared.

From the beginning of World War Two in September 1939 until March 1940 Lilian served at the Chatham Naval Hospital base and was nursing on a warship in the North Sea, witnessing some of the worst sea tragedies of the war. She described her experience in a letter, saying:

I haven’t had much sleep lately, as the drone of the planes with bangs and pom-poms isn’t exactly a bedtime story…We have a very mixed bag at present, including Dutchmen, Frenchmen, Norwegians and Poles. The Dutchmen were rescued from an oil tanker and were badly burned. I am writing this letter on my bunk at midnight, and the watch has just told me that the signal is up, which means that the enemy is around. I can hear guns in the distance, and the other night between the bangs I could hear the comforting sound of our men singing in the gun-turrets. [7]

During the Dunkirk evacuation from the 26 May to the 4 June 1940, Lilian served on a hospital ship and was injured. Her injuries resulted in her being off-duty for five months. She went on to serve on other hospital ships throughout the war including the “Vasna”, and saw active service working at the Chatham Naval Hospital during the ‘Blitz’, the series of German bombing attacks on London and other cities between 7 September 1940 and 11 May 1941. For her service, Lilian was awarded the Associate Royal Red Cross Medal (ARRC) on the 1 July 1941. This decoration which was instituted by Queen Victoria in 1883 is bestowed on nurses in recognition of highly distinguished service.

It was also during her service with the Royal Navy in World War Two that Lilian acquired the rank of Lieutenant-Commander. [8]

Lilian died on the 9 February 1987 at the age of 89, and is buried at Waverley Cemetery, Sydney.