The First Racecourse – The Settlement of Parramatta – James Jervis 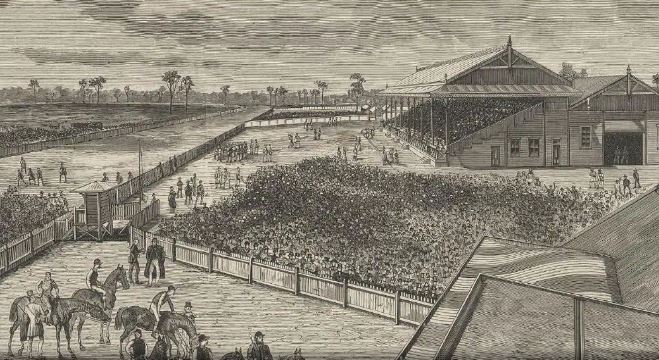 A large section of the Harris estate, vis., 40 acres west of the railway line and 100 acres on the east side, was divided and offered for sale on November 4, 1876. The lands subdivided lay between Church Street on the west, and Harris Street on the east. Reference was made to the “beautiful wooded hills which have been the pride of the town and district for years past.” The proceeds of the sale amounted to £12,300 and many lots of the 280 submitted were unsold.

A preliminary notice concerning the subdivision of a “large portion of the 30-acre grant known as Experiment Cottage and lands now in possession of Rev. H. Langley,” appeared in the Cumberland Mercury of November 4, 1876. Some years passed, however, before the subdivision was put on the market. Seventy-five quarter acre lots between Elizabeth Farm and Harris Street were offered for sale on August 27, 1879. After this sale there still remained the section on which Experiment Farm Cottage stood amid this remained intact until 1921, when the last of the estate was sold.

Wigram and Allan Streets recall the fact that Sir Wigram Allen was a member of the syndicate interested in the sale of these lands. Some of the streets are named after the daughters of Mr. J. Y. Mills, one of the members of the firm of Mills and Pile, which offered the lands for sale.

Brownrigg’s map of 1844 shows a subdivision of part of the Harris estate, but the land does not appear to have been put up for sale, nor were the streets shown on the plan clear.

That portion of the town lying between Dixon Street and Railway Street and west of Church Street, stands on grants to the following:

The first racecourse in Parramatta stood on Meehan’s grant from 1825 to 1847. The grant appears to have been leased or sold to John Lacy, who carried on an inn close by. The land was advertised as to let by John Lacy in January 1829. A subdivision of the racecourse was advertised as for sale on October 20, 1842. The greater part of the land was then said to be clear, and the neighbouring lands to be thickly populated, it is doubtful whether the sale was successful, as races continued to be held on the site until 1847.

The earliest building in this locality was a toll house erected by Richard Rouse early in 1813, at a cost of £200. It stood on the eastern side of Church Street, near the present boundary stone at Raymond street corner. The gate extended across the roadway near the present Boundary Street. The Toll Bar was removed In the thirties, or earlier, to the Woodville Road junction. The land on which the Toll House stood wits promised to Dr. John Harris in 1825 by Governor Brisbane in consideration of his erecting the new Toll House. The old Toll House was then converted into a constable’s hut. John Lacey’s inn stood opposite the Toll Bar in 1826, and probably earlier