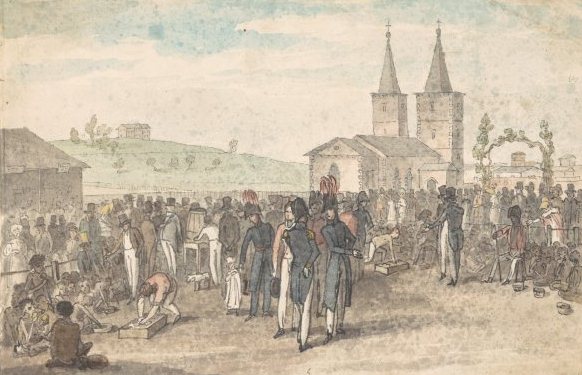 This annual conference was an open invitation from the Governor to local Aboriginals to come to the market place at Parramatta where a dinner would be offered to all who made the trek.

It was first started by Governor Macquarie on the 28 December, 1814, to find potential students for his new school for aboriginal children. From Macquarie’s perspective the meeting appears to have a partial success as students were enrolled in its aftermath. But it was set up with a suite of hard and unflinching rules.

Fourteenthly: That no child, after having been admitted into the institution, shall be permitted to leave it, or to be taken away by any person whatever (whether parents or other Relatives), until such time as the boys shall have attained the age of sixteen years, and the girls fourteen years: at which ages they shall be respectively discharged.[1]

After 1814, the meetings became annual events but the school seems to have become less significant for respective Governors. By the 1820s it was more commonly referred to as the Parramatta, ‘Feast Day’, as this became the primary activity of the day. Likewise the scheduling changed over time and this appears to have caused its popularity to wax and wane, depending on whether it coincided with traditional Aboriginal activities.

In 1824, Colonial Secretary’s Office issued a general order stating the Governor would hold his ‘Annual Conference with the Chiefs and Tribes of Natives’, on the 28 December, at 11.00 am at the market place in Parramatta.

In 1826, the postponement of the scheduled event appears to have resulted in less people turning up. One reason offered by a contemporary reporter was that new date, 17 January, did not coincide as well with the traditional Aboriginal meetings, which were always an incentive for making the trek to Parramatta. .

As it turned out the rain poured down incessantly on that Tuesday drenching the 200 or so Aboriginal guests waiting for the distribution of food and clothing. While the report in the Australian does not make it clear how long they had to wait, it does state that at 3.00 pm the Lieutenant Governor arrived and that he was shortly afterwards followed by Colonel Dumaresq, Samuel Marsden and other civil and military officers.

After a short speech, boiled beef, soup, and plum-pudding were served to the guests who were all seated in a semi-circle on the ground in tribal groups. Each group was represented by one of the following: Bungaree, from Broken bay;  Blang; Dual, from Appin who accompanied Hamilton Hume to Berima; Cogle [or Koggie?]; Boodeny; Niaggan and Bill Jebinge (Jubbinguy), who had been captured and imprisoned by Macquarie in 1816.

Although shelters were set up to protect the guests from the incessant rain they refused the offer, perhaps preferring to eat the meal in the groups and seating order they had decided on, rather than being forced under the shelters. Given the weather and the changing of the dates, it was no surprise that a local reporter suggested the guests:

… seemed a little disappointed at the postponement of their festival this season, it was hitherto deemed by them an anniversary for holding intercourse with several tribes: but, the usual moon having been past, they gave up their treat as gone.[2]

For the feast on the 2 January 1828, around 200 Aboriginals attended and made themselves comfortable in a piece of open ground in the market. This place had been set out with short posts lined with branches which allowed the visitors to recline. The Governor had set out from Sydney at around 9.00 am and arrived at the market place around noon. After waiting for a short time in front of the assembled group he ordered the clothing, which had been stored in the adjacent lumber yard, be brought out for distribution. A diner of boiled beef, potatoes and plum-pudding was then offered and after this there was Aboriginal dances and singing.[3]

The ‘Feast Day’ continued to be held around early January for the next five years. On Tuesday the 10 January, 1832, around 280 Aboriginals arrived for the annual feast. They were greeted by a:

… long range of tables decently covered in table cloths … and the fair appears to have been the usual beef and potatoes. A jacket and trousers were dispensed to all the men present and blankets were given to the women (although it was noted in the Australian that there were not enough blankets to meet the demand). They departed as soon as the dinner was finished.[4]

But the following year a radical change was implemented by the Colonial authorities when the event was held on 9 May, 1833. Although the annual dinner was still held the Australian described the day as being wet and cold and this was felt by the Aboriginal people who had turned up.

At 2.00 pm Governor Bourke arrived in a close carriage with his wife. The dinner handed out consisted of roast beef, plum-pudding and potatoes and two sheets were erected over the diners to stop the rain. After the dinner a pair of trousers and a shirt were given to each attendee but no blankets were included. This was because the distribution of blankets by this time was conducted separately and were more formally handed out in each district.[5]

Over the lifetime of the feasts other items including hats, trousers, shirts, petticoats, and blankets were also added to the list of gifts. From the late 1830’s blankets began to be used to provide a type of census of the Aboriginal people of the area. It was also when the decision was made to distribute them during during winter when they were felt to be more useful. 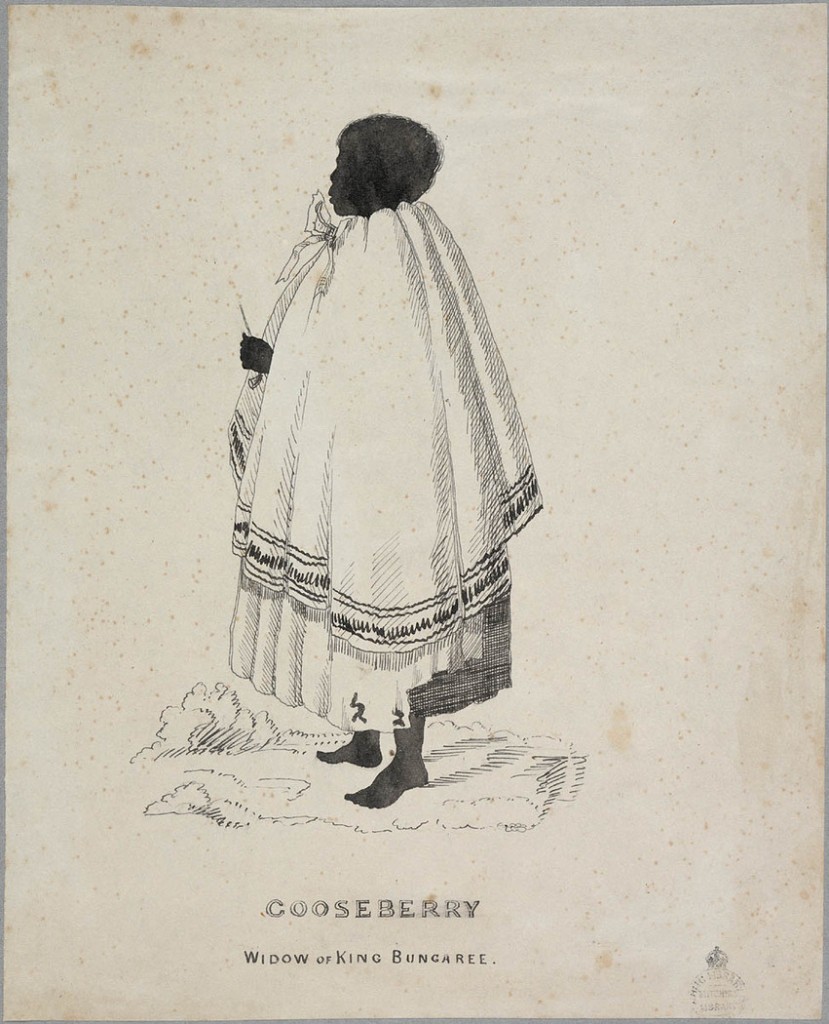 The ‘feast day’ appears to have continued to until at least 1837 when John Taylor, a long term resident of Parramatta, gave the following first hand account:

… gathered in a ring …in an enclosure run up by the men of the Lumber Yard and surrounded with bushes. The Lumber Yard was a place adjoining the Military Hospital in which men of different trades pursued their various callings. The Governor and suite would attend, followed by constables with rolls of blankets. … after the distribution would come the feast – roast beef and plum pudding. The latter I remember was made by the inmates of the Female Factory over the water, and the viands were trundled up from the institution to the ‘feast-ground’ in the first vehicle handy.

At nightfall the two or three hundred … would have their feast according to their own fashion, generally in the vacant ground at the corner of Macquarie and Marsden Streets now occupied by the house ‘Mangoplah’ where Sir Henry Parkes resided some twelve years ago. Others would go to the higher ground – the Western Road near the toll-bar for instance – and the feast fires and the … could be seen til after midnight.[6]