Men of Parramatta – The bush guide and translator Daniel Moowattin 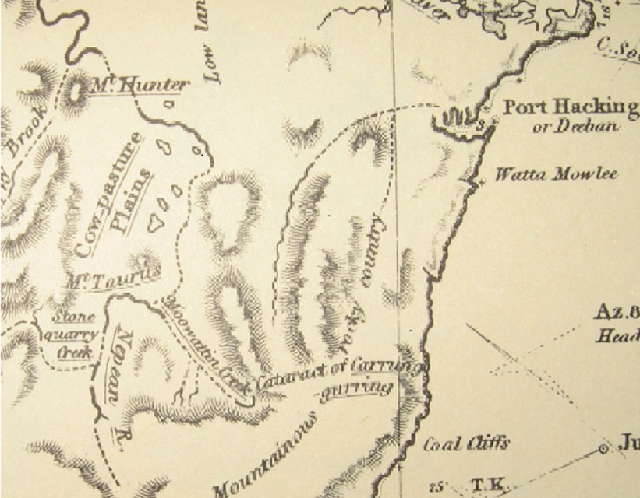 Daniel Moowattin, bush guide, translator, explorer and friend of the significant botanist George Caley was born in Parramatta in 1791. He was orphaned at a young age and adopted at the age of five by Richard and Mary Partridge. There are no records to indicate what happened to Daniel’s parents which resulted in his adoption, but most likely they had been affected by the smallpox epidemic devastating the Aboriginal community at that time. By all accounts Daniel was born in Parramatta. Samuel Marsden, who was the Minister of St. Johns Church Parramatta for nearly fifty years said that Moowattin was of the Parramatta Tribe.

Both Richard and his wife Mary arrived on the First Fleet. They were married at St. John’s Cathedral and Richard went on to become a flogger and constable gaoler who supervised convicts. Known as the left-handed flogger he was one of the men who flogged the Irish after the Vinegar Hill uprising. His land grant was where James Ruse Agricultural School now stands. Richard was buried at St. John’s Cemetery on the 23 May 1831.

Richard and Mary named their adopted son Daniel, but most people who knew him referred to him as Dan. Dan was his childhood name, but after his initiation his adult name became Moowattin. Moowattin means ‘bush path’. Caley referred to him as Dan and then began referring to him as Moowattin around 1806 when he would have been approximately fifteen years old. There are many variations on the spelling of Moowattin in the historical records, including Mow- watty, Mowwatting, Moowatting and Moowattye.

Daniel Moowattin first met George Caley in 1802 and they were friends for several years before he became Caley’s guide, translator, and travelling companion. Caley was extremely independent-minded and acknowledged the strengths and superiority of the Aboriginal people. In 1803 referring to recent incidents of civil strife Caley commented:

“In some attempts that we made to take them by surprise, they completely duped us. I shall not hesitate to say that had they been bent for to do us as much injury as we would have done to them, the matter would not have ended so well; for it was in their power to have done us almost an irreparable injury by fire, as the colony was so badly off for the want of provisions. Whether the natives were guilty of what was laid to their charge I shall not say; but there has been proof of the stockkeepers losing a part of their flock and laying the charge to the natives, when at the same time they were innocent.”

In their explorations together Moowattin helped Caley find dozens of different plant specimens and fauna that would have been impossible for Caley to have found alone including many different species of eucalypts, gumnuts and flowers.  It was also as a result of their collaboration that it was learnt that the Saligna Blue Gum was called Calang’ora and the blackbutt the Tarunde’a. In acknowledgment of the contribution that Moowattin made, Caley labelled many plant specimens discovered by him as “got by Dan”. Many of these can be found at the National Herbarium of New South Wales.

Over the next five years Moowattin and Caley also travelled extensively together. In October 1805 they travelled to Van Diemens Land, and in July 1807 Moowattin was sent by Caley in search of a koala. Moowattin in his investigations discovered the Appin Falls on the Cataract River. Subsequently Caley named the river the 'Cataract of Carrung-Gurring on the River Moowat'tin', but unfortunately the name did not survive. They also lived together sharing Caley’s cottage on the Parramatta River north-east of Government House, bordered by O’Connell and Marsden Streets. The Old King’s School currently stands on this site.

In 1810 Moowattin travelled with George Caley to England. Moowattin was at that time only the third Aboriginal person to visit England. Moowattin was unable to disembark with Caley as he first required a sponsor. Once Joseph Banks agreed to act as a sponsor to Moowattin and he was allowed to disembark the Hindostan, Caley immediately had him inoculated against smallpox. Over the next year their friendship continued in London, exploring the city together and visiting old friends such as George Suttor, the botanist Robert Brown, but also the former Governor William Bligh. They also visited the Royal Society in Kew together. From all accounts, Moowattin adjusted quickly to London life, dressing fashionably, smoking a pipe and attending theatres and coffee houses. He also began to drink heavily which resulted in an argument with Caley in February 1811. The argument became so heated that Caley broke his thumb hitting Moowattin. During this period when asked about England Moowattin said:

"There were too many houses, trees were much wanted; could not imagine how all the people got food; thought the weather was so cold. Clouds too near the ground; horses fine, the men strong, the women beautiful."

In August 1811 Moowattin’s sponser Sir Joseph Banks requested that he was to return home. It was on his voyage home he met the future magistrate Robert Lowe who described him as a sensible man and very intelligent and “and so much pleased with the manners and customs of Europeans, that he had frequently during the passage avowed a determination to conform to them entirely after his arrival”. Yet shortly after returning home he returned to the bush. He eventually became a labourer and was working for an emancipist named William Bellamy, who had a farm in West Pennant Hills. It was here on the 6 August 1816 that he was accused of having attacked and raped a 15 year old girl called Hannah Russell. It was decided by those at the trial, which included Samuel Marsden and the famous explorer Gregory Blaxland, that due to his exposure to European culture Moowattin could distinguish between right and wrong and therefore could be found guilty. He was found guilty and with his hanging on the 1 November 1816 Moowattin became the first Aboriginal person in New South Wales to be legally executed.

Daniel Moowattin’s life ended tragically, but his accomplishments remain unquestionably significant. The many specimens sent back to England that he collected with Caley vastly increased the knowledge of the natural world. Also his relationship with Caley and their interractions with the Aboriginal people is one of the most important examples of productive collaboration during this era of Australian history.