Rookwood Cemetery or officially the Rookwood Necropolis opened in 1865 and consecrated in 1867. At the time it was known as Haslem’s Creek Cemetery[1]. It is the largest cemetery in the southern hemisphere occupying 314 hectares[2] and is divided and managed by the Rookwood General Cemeteries Reserve Trust (responsible for two-thirds or over 190 hectares of Rookwood since 2012[3]), the Rookwood Necropolis Trust, the Catholic Metropolitan Cemeteries Trust (86 hectares[4]), Rookwood Memorial Gardens and Crematorium (InvoCare), and the Office of Australian War Graves. Now part of the Cumberland Council local government area in western Sydney, it is located in the suburb of Rookwood which is close in proximity to Lidcombe Railway Station, New South Wales. There are more than a million people, representing over 90 different religious and cultural groups calling Rookwood Cemetery their final resting place.[5]

For an overview history of Rookwood Cemetery, you can view their interactive timeline here – http://www.rookwoodcemetery.com.au/timeline

Majority of the Chinese in Sydney are interned there and may be buried within various denominational areas. Overtime certain sections have been allocated for the burial of Chinese ethnic origins like the Old Chinese and Old General areas within the “Old Ground” of the cemetery, and also the Independent Methodist area. Headstones with Chinese inscriptions have also been found covering the drain between Sections M and RRRR in the Anglican area, and are listed in Section M. These is also a Chinese section in Zone H which was selected because it met certain feng shui criteria.[6]

Click link for a map of the layout of Rookwood Cemetery to assist – http://www.rookwoodcemetery.com.au/assets/Map%20RGCRT%20Office%2022FEB16.pdf

In the Old Chinese Section of Rookwood Cemetery, you may notice that there are a lot of gaps among the headstones. This is because many Chinese immigrants were returned even after death to their Celestial ancestral village in the hopes of their spirits reunited with loved ones. 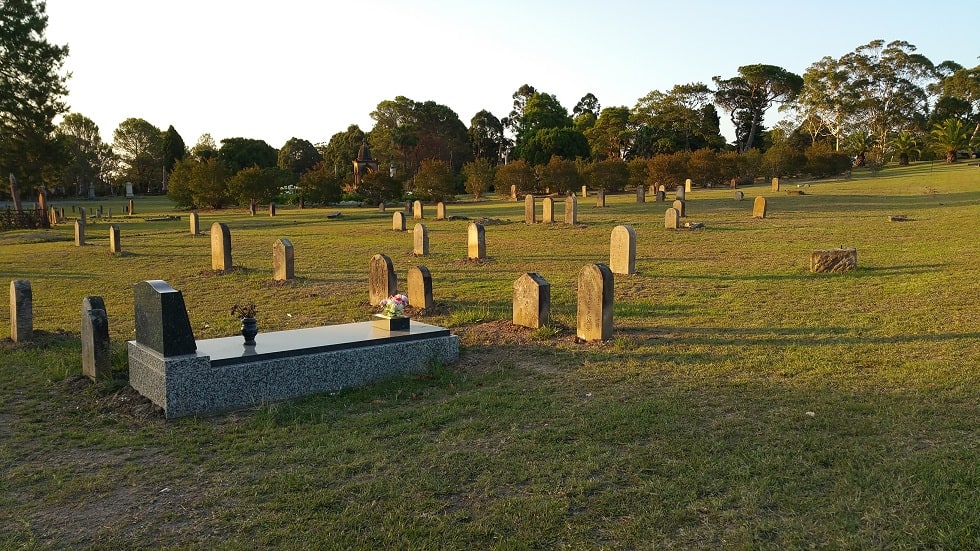 Death and traditional burial customs in China tended to follow a 3 stage process after the funeral rituals, but this could vary depending on the regionality, wealth, marital status, age and subsequent circumstances of the descendents of the deceased. The burial process involved an initial internment outside the home village, then after a certain period (about 7 years), exhuming and transferring the deceased’s bones to a ‘golden pagoda’ 金塔 (kam taap/ jinta/ Chin t’a) on an open hill outside the village and finally moving the urn with the deceased’s bone into the family vault in a good geomantic or feng shui location[7].

Burial practices of the overseas Chinese tended to follow similar rituals. As described by a Ballarat Star reporter observing a Chinese funeral:

After the body has been deposited in the grave some boughs are laid beside it. Candles are then lighted, and jostic is burnt, and a quantity of paper with Chinese characters upon them are consumed. It is customary to bring out potatoes, broiled fowls, pork, dumplings, and sweetmeats, together with brandy. Three glasses are filled with this liquor, which the chief person present raises to his lips, but does not drink, besides going through various bowings and genuflections. The sweetmeats are given away to the crowd who may be standing by, whilst the viands are taken back to the place from which they were fetched. The meaning of this peculiar ceremony is a peace offering on behalf of the deceased, to the evil spirit, in order to propitiate it.[8]

It was common practice for the Chinese to return their dead back to the ‘Celestial land’ to be buried there and reunite with their family after an initial internment in Australia. Funerals, burials and exhumations were often paid by families but a number were also paid for by the Tongs 堂, kinship groups, clans or societies that shared a close bond because they originated from the same village or district. One of the earliest Tong societies was ‘Quong Sing Tong’ which by 1877 had erected a monument in the Old Chinese section of Rookwood Cemetery.

As early as 1862, the firm Mollison and Black were arranging shipment of up to 200 remains of Chinese who had been exhumes from Sydney and rural burial grounds. The process involved applying to the Australian Health Department for exhumation and should the application be successful, undertakers exhumed the bodies under the supervision of the police to prevent the smuggling of gold outside the country.[9]

Based on the records of Rookwood Cemetery, an average of 55% to 65% (and peaking at 75%) of Chinese burials from the ‘Old Chinese section’ were returned to China between 1875 and 1930. For further numbers, see William’s Appendix IV, Table 7: Burials and Returns, p. 96.[10] Not until the mid 1930s did the shipment of bodies back to China being to die down.

Hong Kong was considered then a ‘safe haven’ for migrants as it was under British Crown rule from 1841 to 1997, so Tung Wah Hospital (established since 1870) was used as a stopover from Australia in sending the bones of the deceased back to their ancestral village (Williams, 1999, p. 13).

These days as mentioned majority of Chinese still choose to be buried in Rookwood Cemetery. Doris Yau-Chong Jones’ 2003 publication Remembering the forgotten: Chinese gravestones in Rookwood cemetery 1917-1949 recorded over 1000 gravestones. Generally Chinese gravestones feature 3 columns of inscriptions. The central column is the name of the deceased. The right hand column (west) is the date and time of death and on the left hand column (east) is information on the original Chinese village the deceased comes from and their age at death. Although not all Chinese gravestones follow the same pattern. The House of Chinn website has created a guide to reading Chinese tombstones – http://houseofchinn.com/ChineseTombstones.html

Today, there are many Chinese festivals associated with cemeteries and the dead. Those commonly practiced by Australia’s Chinese are:

The oriental monument known as Quong Sing Tong in the general Old Chinese, section A of Rookwood Cemetery was erected in 1877. This shrine was originally in the centre of the Chinese section and used by the community as a shrine for funeral ceremonial purposes. Quong Sin Tong was one of the earliest Chinese societies in the state of New South Wales. Up until the 1950s, the society helped with the exhumation of Chinese graves from Rookwood Cemetery for reburial in China, in accordance with the beliefs and practices of the community. In 2008 restoration work saw it returned as close as possible to its original condition. Work included carving of a new sandstone urn, replacing the rusted fencing and repairs to the historic moat and entrance steps.[12]

‘Luk Fook’ is a Cantonese auspicious phonetic translation of the word Rookwood. Luk (六) is the number six. In Chinese it is considered a lucky number. Fook (福) means blessing and Tang (亭) is pavilion. The Chinese World War II memorial pavilion was opened in 1970 and provides a place for all to pay respect to those who fought in the war. It is located in the Chinese section H on the east side of Blashki Avenue. Overtime has been a significant meeting place during Ching Ming and Chung Yung for families and Tong societies to gather, prayer and distribute food that has been blessed.

Established and revealed on 9 October 2016 in the Old Chinese section as part of a project initiated by the Australian Chinese Workers Association. The memorial commemorates the memory of the Chinese miners who were injured and killed in a series of anti-Chinese racial riots including Tipperary Gully, Lambing Flat (now Young) and other goldfields throughout Australia from 1851 to 1861. 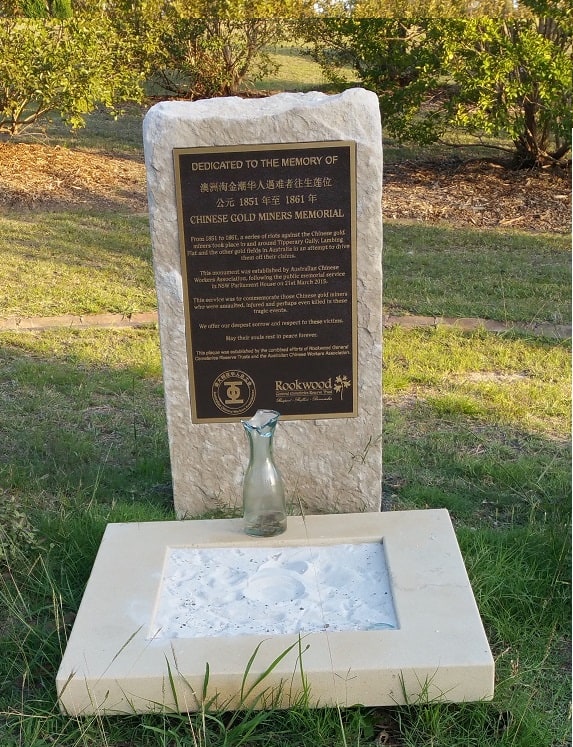 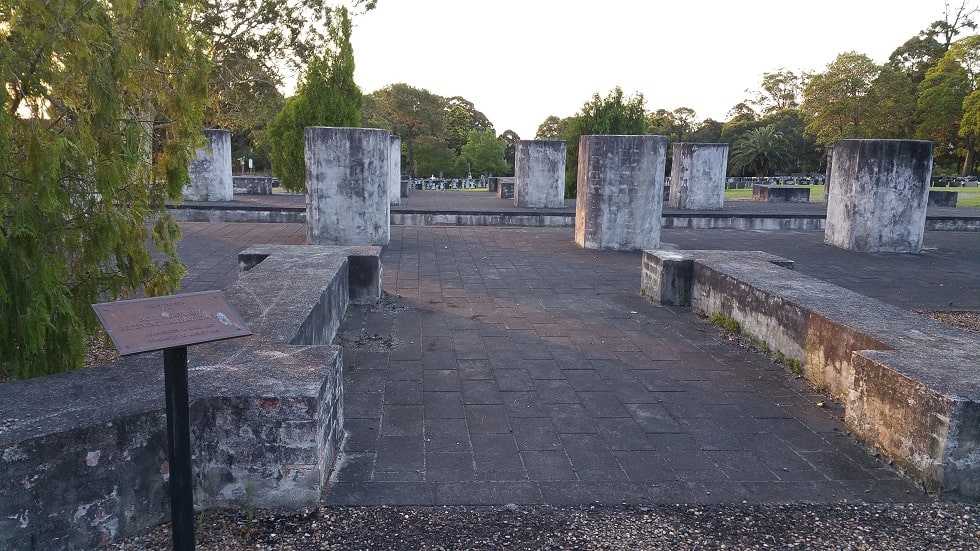 Another part of Rookwood Cemetery that deserves an honourable mention is the former Rookwood Necropolis railway line which was closed on 29 December 1948. Designed by colonial architect James Barnetthe, who also designed the Regent Street railway station, formerly known as the Mortuary railway station in Redfern. Construction started in 1864 and comprised of four stations within the cemetery grounds:

It was on these funeral train trips out from Redfern to Rookwood cemetery that a lack of cultural understandings of the Chinese customs and festivities (especially Ching Ming and Chung Yung) that led to complaints and conflict.[16] To remediate the situation, separate trains and timetables were rolled out.[17]