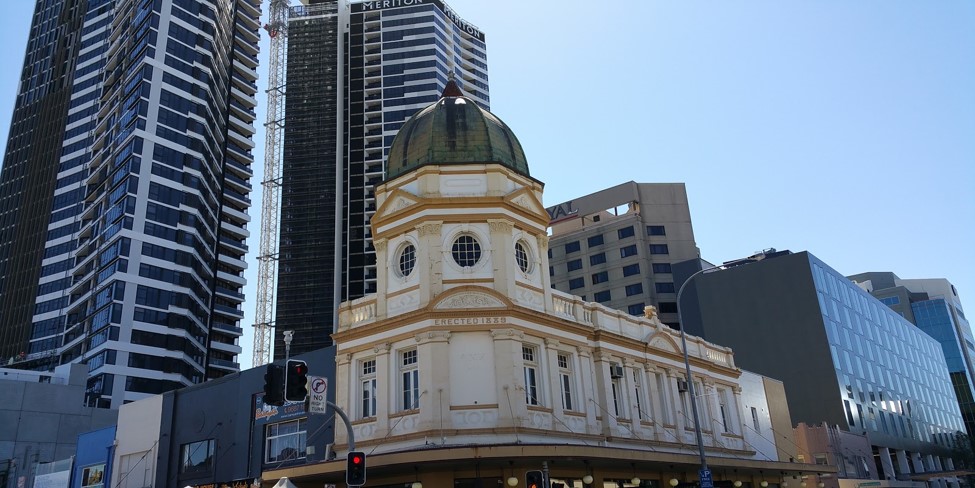 This iconic late Victorian building with a dome on the north-east corner of Church and Phillip Street Parramatta was erected in 1889 as indicated on the building. At the time of its construction, the architect was Mr Walter Hillary Monckton of Rydalmere and Parramatta (who died on 7 March 1924 in Manly NSW, aged 62) and the contractor was A. M. Allan of Summer Hill, New South Wales. Both were also involved in the design and building of the Canterbury Town Hall, Dundas Town Hall (now demolished) and Rydalmere School of Arts (later Rydalmere Town Hall, now demolished). The foreman was Mr Renton, cement work was by Mr Wollcott of Sydney and plumbing was completed by local plumber Mr J Martins.

According to the Cumberland Argus and Fruitgrowers Advocate article dated 27 July 1889, this building was built for Cumberland Building, Land and Investment Society (C.B.L & I.S.) Company which was established in 1881 by Frank Beame (Parramatta Mayor 1889, 1891) and went into liquidation around 1898. The dome is reminiscent of a scaled down model of the dome of Santa Maria del Fiore in Florence, Italy.

Prior to the construction of this landmark heritage listed building, the first recorded European settlement of the site was a land lease from 11 April 1804 to James Horrax (or Harrex), a convict who arrived in Australia per “Ganges” in 1797. The land title was returned by a Sarah Mucklow on 5 April 1823. On 30 June 1823, it was granted to South Sea Island missionary Francis Oakes. It would remain the Oakes family until shortly after the death of 93 year old widow Mrs. Rebecca Oakes (nee Small, born 1789). On 28 March 1883, Oakes Estate which included a shop, dwelling-house and outbuildings was subdivided into 14 allotments and sold at auction by Mills and Pile auctioneers. Lot 10 DP 65743 was purchased by C.B.L & I.S. for £1,755 16 shillings and 8 dimes (that equates to $240,675 in present value).

From 1898, this landmark was leased and used by popular Parramattan dentist and later Parramatta Council alderman Leicester Stuart Anderson “Simmy” Simpson (1874 – 9 July 1936) as a dental surgery. In a full page spread in The Cumberland Argus newspaper article Mr. L. A. Simpson’s Dental Establishment dated 30 September 1899, page 13, photos of the interior and exterior were published to showcase the reception area, workroom and surgery on the ground floor. The upstairs was used as Simpson’s private residence.

By 1900, the site was up for auction again.This time it was purchased for £1,600 by New Zealand native Archibald B. Maxwell, a dental surgeon who rebranded the building as a ‘Dental Studios’.

In 1907 his partnership with another surgeon dentist Norman George Gould dissolved and Gould took over the practice until his death on 20 February 1910 from poisoning by laudanaun or opium. Gould was going through an much publicised separation from his wife Mildred Gould (nee Abbott) which made the headlines. His body was discovered by his brother Leslie Hart Gould, another local Parramatta dentist.

From 1909, it was number 248 Church Street, Parramatta and was occupied by the Government Savings Bank which ceased operating on 21 April 1931 because it ‘lack of money’ after 100 years of services.

According the NSW Lands Registry Services Historical Land Record Viewer, the land title for the site was held by Sydney furniture warehouseman Sidney Hall in 1929, before the top floor was quickly transferred to Miss Florence Muriel Blanche Watt (later Mrs Muriel Florence Blanche Thompson, who died on 23 February 1953) in June and the ground floor was leased to the Union Bank of Australia Limited of the Banking Chamber. By 1932, the Union Bank took over the whole building until it went into voluntary liquidation and its assets were transferred to the Australian and New Zealand Bank (also known as ANZ Bank). The ANZ Bank branch occupied the site from 7 September 1955 until 1996. In 1959, accountants William John Andrew of Parramatta and John Andrew McNamara of Eastwood also leased portions of the first floor.

On 25 October 1997, Council approved plans for the ground floor to be refurbished as a restaurant cafe while the first floor was to remain vacant (DA/602/1997). This restaurant was Liana’s Italian Restaurant until late October 2018 when it was closed for renovations and later in November that year reopened briefly as Mille Uno, an Italian restaurant before permanently closing during the Covid-19 pandemic. As of 4 November 2020, it has reopened as Lone Star Rib House and Brews Parramatta, an American style BBQ franchise restaurant from Texas.