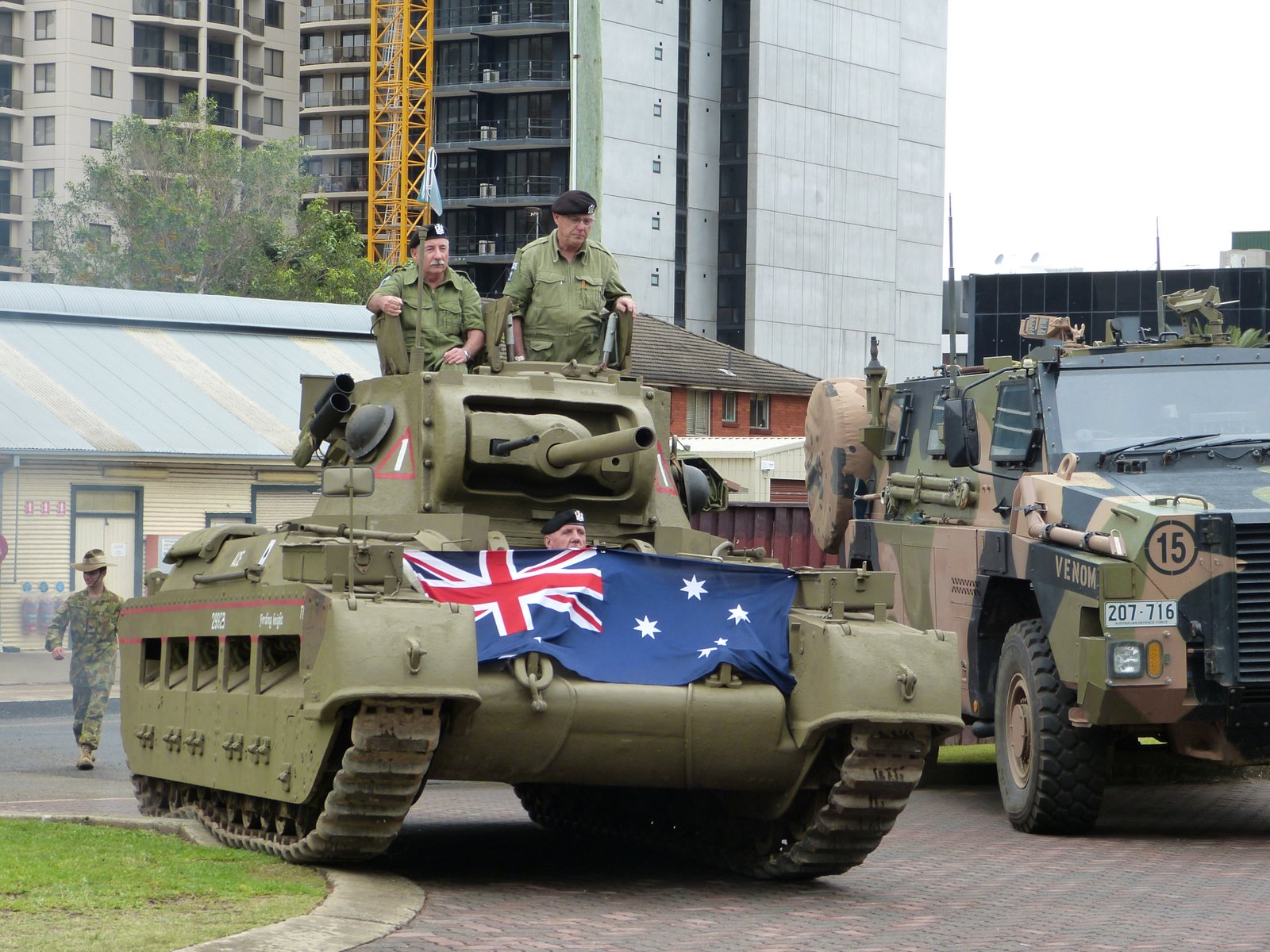 The Freedom of Entry ritual dates back to medieval Britain (c.480-1500AD) when groups of armed soldiers seeking entry to a city would be challenged by the city Marshall (head of military) at the entry gate. After indicating their peaceful intent, groups were allowed to enter only with weapons concealed, flags cased and drums silent. With the passage of time, this custom was modified to enable civic authorities to pay tribute to the loyalty and contribution of a distinguished unit of the armed forces by ceremonially permitting their entry to the city, thus cementing a bond of mutual trust and respect.

The City of Parramatta granted Freedom of Entry to the Royal New South Wales Lancers in October 1959, giving them the right to march through the streets on Ceremonial Occasions in full panoply armed and with drums beating, bands playing and Guidon flying. 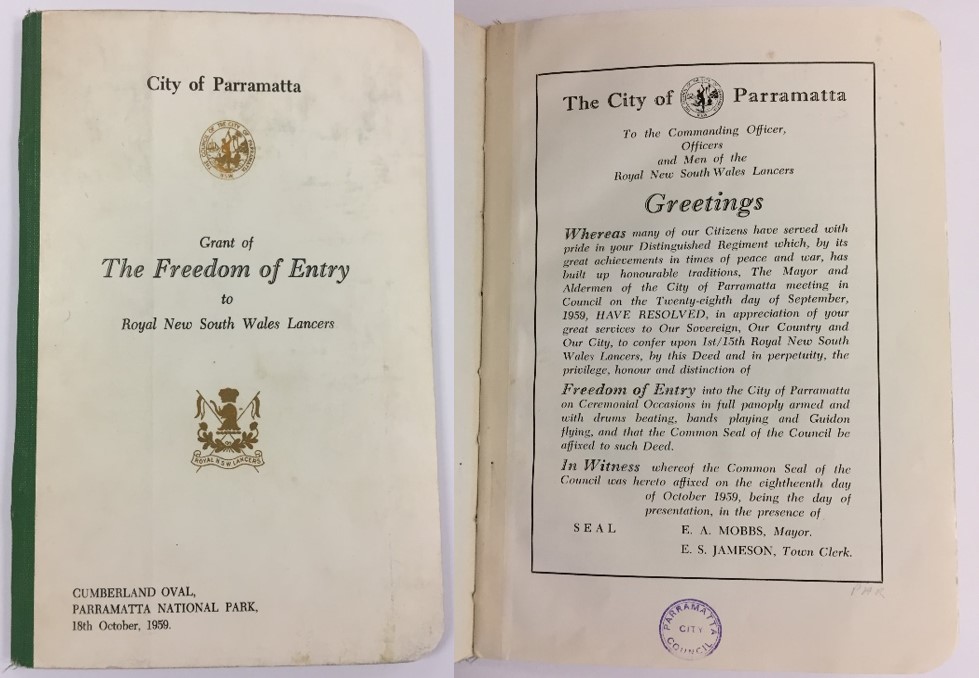 The granting of Freedom of Entry is the highest accolade a town or city can bestow upon a group or individual and it is no less readily won or lightly given today than it was centuries ago.

In 2003, Council resolved to have a Tri-Service parade to coincide with Foundation Day, this involved HMAS Parramatta, the 1st/15th Royal NSW Lancers and 38 Squadron RAAF. Experience this moment in time captured by the City of Parramatta.

Unedited version of the Tri-Service parade

00:08:  This day, Sunday 2nd November 2003 marks a very special day for Parramatta New South Wales. On this day, we celebrate Parramatta’s Foundation Day. As part of our spring festival, three arms of the Australian Defence Forces will exercise their right and privilege to march through the City of Parramatta with swords drawn, bayonets fixed, drums beating, colours flying, and bands playing, as part of a Tri-service Freedom of Entry Parade.

00:41: This rather unique parade has only been performed on two known occasions previously. The first occasion was in 1966 and more recently in 1988. On both occasions, this ceremony has been proudly conducted in the heart of the City of Parramatta.

01:02: The history of granting Freedom of Entry to a city to armed service units dates back to the 11th and 12th Centuries. In those early times the walled cities of Europe held trained soldiers for defensive measures and for the protection of the city against bands of marauding undisciplined armed men, many returning from the Crusades.

01:23:  Shortly, the Lord Mayor of our city, Councillor Paul Garrard will escort the chief reviewing officer, General Peter Cosgrove AC MC Chief of the Defence Force to the official dais. At 11am the contingent will leave the Lancer Barracks. They will proceed along Smith Street and turn into Macquarie Street. The marching contingent will be escorted by the NSW Mounted Police and the NSW Traffic Support Group VIP Cyclists.

02:17:  Freedom to enter the city was granted only to friendly armies and was rigorously controlled by city leaders as a measure of caution rather than an act of grace. The ancient City of London held charter that was renewed by William the Conqueror in the 11th Century. It based its strength and independence not only on its trading ability but also on its powers to raise and train City regiments for its own protection.

02:51:  In Australia in 2003, the granting of Freedom of Entry bestows no legal right or privilege on the recipient. But, it is accepted and acknowledged that the confirming is the most honourable distinction that a city may bestow on a contingent of the Australian Defence Force.

03:14:  In Parramatta, we are privileged to have not one, but three units of the fighting Australian Defence Force associated with our city. Even more unique, is that each arm of the Defence Force is represented here today.

04:30: Upon reaching the Challenge Point the marching units will be challenged by the City Marshal, Detective Chief Inspector Don Brown, of the Parramatta Area Local Command, accompanied by the Police Protocol Officer, Inspector Paul Martin. The City Marshall shall be assisted in the Challenge by the Parramatta Council’s General Manager, Mr John Neish, who will verify the authenticity of the scrolls. Once the scrolls have been checked and certified, the contingent will be permitted to proceed. HMAS Parramatta III was granted the Freedom of Entry of the City of Parramatta on 13th February 1965. The current HMAS Parramatta had the Freedom reconfirmed on 26 September 2003. The moto of HMAS Parramatta is “Strike Deep”.  As each of the marching contingents pass the official dais they will extend a salute the Chief of the Defence Force and his Worship the Lord Mayor of Parramatta.

06:21: The 1st/15th Royal NSW Lancers is the longest continuous serving unit in the Australian Army. Having been formed in the March of 1885 as a cavalry unit. The regiment saw service in South Africa against the Boers and during World War 1 served as a Light Horse regiment. During World War II, the Lancers were equipped with Matilda tanks and saw service in New Guinea and Borneo. Centurion tanks were brought into the Lancers after World War II, but now the unit is a reserve unit equipped with armoured personnel carriers. The primary function of the Lancers is an armoured resonance unit.The 1st/15th Royal NSW Lancers were granted the Freedom of Entry to the City of Parramatta on the 18th October 1959. The motto of the Lancers is “Steadfast in Faith”.

07:61: The 38 Squadron Royal Australian Airforce was formed at Richmond on 15th September 1943 and was equipped with Lockheed Hudson Mark 4 aircraft. In 1944 the squadron was reequipped with Dakotas, serving in the South West Pacific area.The 38 Squadron flew with the first RAF aircraft to Singapore in August of 1945 following the surrender of Singapore. The squadron has also seen service during the Berlin air lift, the Malay emergency, in Vietnam and in Papua New Guinea. In 1978, they served as part of the United Nations’ military observations in Pakistan. The 38 Squadron RAAF were granted Freedom of the City of Parramatta on the 7th November 1981. The motto of the 38 Squadron is “Equal to the Task”.

08:14: As a mark of respect, a salute will also be extended from all units to the Memorial of Remembrance which is located in front of the Parramatta RSL Club.