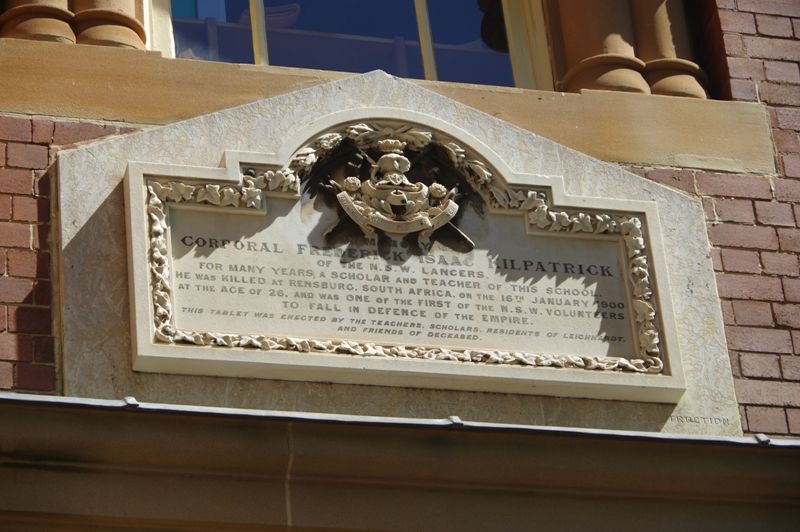 Fred Isaac Kilpatrick was born in 1873 in Adelong, New South Wales. In 1884, his family moved to Leichhardt, Sydney where he attends Leichhardt Superior School. In 1890s Fred joined Department of Public Instruction and secured a scholarship to study at university. After completion of his studies in 1897, he started working as an assistant teacher at the primary school in Carlingford and then at Leichhardt, Sydney. 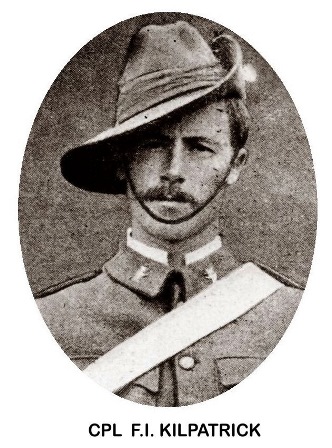 A year later, in 1898, he joined the New South Wales Lancers in Parramatta. In 1899, travelled to Aldershot in England with the Lancer as a Parramatta Half Squadron for training, and then onto South Africa to fight in the Boer War in South Africa. On 16th January 1900, he was wounded during an ambush while on reconnaissance near Slingersfontein, and died on way to camp to receive medical attention.

In the official report relating to the incident which lead to Kilpatrick’s death, Major Lee, the commander of Lancer Squadron South Africa writes:

"Slingersfontein, 17-1-1900.- In reference to the patrol of New South Wales and First Australian Horse that left camp at 3 a.m. yesterday under Lieutenant W.V. Dowling, of the First Australian Horse, the following is notified for record: The patrol after leaving camp was attended by Major Lee as far as Pleese's farm. After short halt Lieutenant Dowling moved on with patrol. At 3.30 p.m. Warrant Officer Duncan reported his return to camp, also that he had been with Lieutenant Dowling's patrol up till 1 p.m. The patrol had reconnoitred according to instructions, and was about returning to camp when Warrant Officer Duncan with two men, was detached to examine Mr. Foster's farm. After doing so, he went in search of Lieutenants Dowling's part, and failing to find them concluded they had returned to camp. At 4.30 p.m. Major Lee received a message from Colonel Porter to see him at once in reference to the patrol, and rode around immediately with Warrant Officer Duncan and Private Buchholtz, and was informed that a New South Wales Lancer patrol had been cut up. Colonel Porter proceeded to the top of the adjacent hill, where Warrant Office Duncan and Private Buchholtz explained all particulars. The Colonel considered the unfortunate occurrence could not be classed otherwise than as an accident, and that no one was to blame. It was decided after hearing the verbal evidence of the Rimington Scouts (Bennet and two others) that we would wait developments and see if any came in after dark. At 11.30 p.m,. Private Artlett, Parramatta Half-squadron, returned to camp in an exhausted condition. The position of the occurrence was located by the Lancer scouts, some distance away on our left front. Upon examination it was found the T.S.M. Griffin, No. 367, First Australian Horse, had been killed from bullet wounds, one being through the head. Corporal F. Kilpatrick, No. 755, New South Wales Lancers, was found severely wounded - one bullet wound through the lungs, and the lower jaw smashed as if by an explosive bullet. Owing to the Boers appearing on our left flank in strength I withdrew all combatants from the front, and sent on the ambulance. On return the medical officer reported that he had buried T.S.M. Griffin on the spot where he had fallen, and that Corporal Kilpatrick was in the ambulance expiring. Corporal Kilpatrick died, at 5.10 p.m. was buried next to the two New Zealanders on the slope above Slingersfontein Farm.”

Kilpatrick was the first New South Wales Lancer to be killed in action and he is buried in Colesburg Cemetery.

Frederick was much loved and the people who knew him had much to say regarding his unfortunate death:

“he was quiet, conscientious and brave, ---a true man, fearless but courteous and without the least trace of coarseness” “

“A fine, straight and manly fellow”

“The news, first of the wounding, then of the death, of Corporal Fred Kilpatrick of the Parramatta Half-squadron of the N.S.W Lancers Regiment, threw a dark gloom over the whole of our district.”

“It is reported that his sister, who lives at Leichhardt, had a vivid pre-vision of his death in a dream.”

“By his Parramatta friends he was highly spoken of, though his disposition was of a somewhat reserved man. He, however, was an able teacher, and one who commanded the respect of his pupils”

“He stood six feet two inches high, and though he could hardly be said to be of a very robus physique, he was a good horseman, and when on parade he look a well set-up cavalryman.”

Above is the memorial at Leichhardt Public School which reads:

'In Memory of, Corporal Frederick Isaac Kilpatrick of the N.S.W .Lancers,  For many years a scholar and teacher of this school He was killed at Rensburg, South Africa, on the 16th January 1900 At the age of 26, and was one of the first of the N.S.W. volunteers To fall in the defence of the empire. This tablet was erected by the teachers, scholars, residents of Leichhardt and friends of the deceased'.

The Education Department of NSW received word of Kilpatrick’s passing quickly from the headmaster at the schools he taught at and memorials were erected with the help of the community.

The public school at Carlingford also erected a memorial for Kilpatrick

“ln loving memory of Frederick I. Kilpatrick, Corporal New South Wales Lancers, Parramatta Half squadron, and assistant teacher at the Public School, Carlingford, who fell on the battlefield at Rendsburg, South Africa, on January 16, 1900, aged 26 years. Erected by the School pupils and friends:

" A glorious death is his Who for his country falls."-Homer

In a poignant letter received after his death Kilpatrick writes of shell attacks going on around him:

“You can imagine how it feels sitting there, knowing a shot is coming, and not knowing whom it might hit. They sent about a dozen at us, and, although the distance was over 7000 yards, they lodged one right in front of our guns, knocking the dust in the gunners' faces. Had their shells been any good, we would have been blown out”