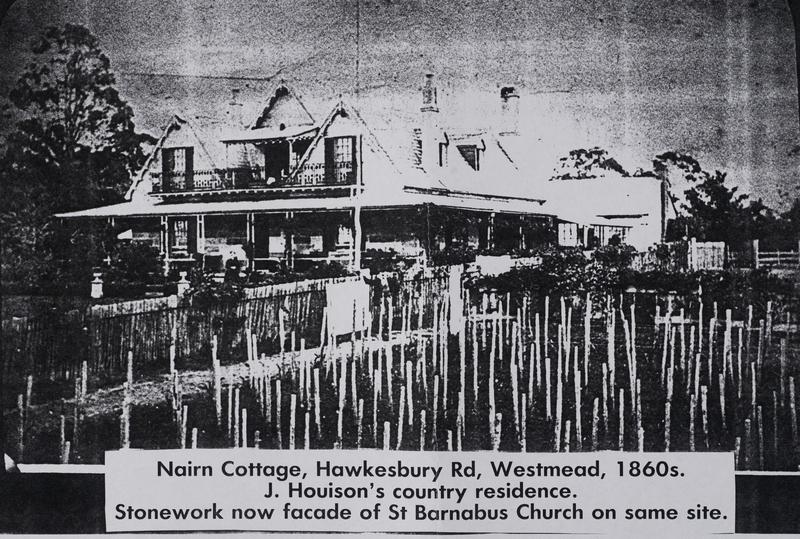 James Houison was an architect and builder, who arrived in New South Wales in 1832. And was a man  who shaped the face of much of Parramatta. He built many structures; for himself and his family and for others. This included full construction or part of many well known buildings in the Parramatta area. A incomplete list gives a taste of the effect James Houison has had on the landscape of Parramatta.

James Houison was and “we must think of him as a man who designed and raised buildings, churches, villas, mills, lych-gates and cemetery vaults” It is unfortunate that many of the places built by Houison are no longer standing. This is the case of Nairn Cottage/Villa.  After many prolific years, James Houison thought on his retirement. By 1860 he had purchased to blocks of land in the newly subdivided “Back Domain” land. This had been part of the Government Domain. The land over looked what is now Mays Hill and Westmead.

This land fronted Hawkesbury Rd and in 1862 Houison build a sandstone villa.  “Using North Rocks stone, compete with conservatory, stables and a couch house. An extensive messuage or orchard completed the complex. The sandstone house was one and a half stories, with double gables in an “M” shape with dormers. The wrap around the verandah had the typical double timber columns with spreaders and an extra spreader that was at the same height as the verhandah railing. Its roofscap and chimney placement were unique.”

James Houison moved into the villa with his wife and unmarried children and names it Nairm, after his hometown in Scotland. John lived until 1876 and passed away at home in Nairm Cottage. The property was in family hands until 1936 but was sold that year to St Johns Church officials. The cottage was in Westmead, a place of growth for the Anglican Church. Despite the best efforts to keep the building as it was, in 1952 an entirely new church was built using the stones from Nairm Cottage. This is St Barnabas Church in Westmead.