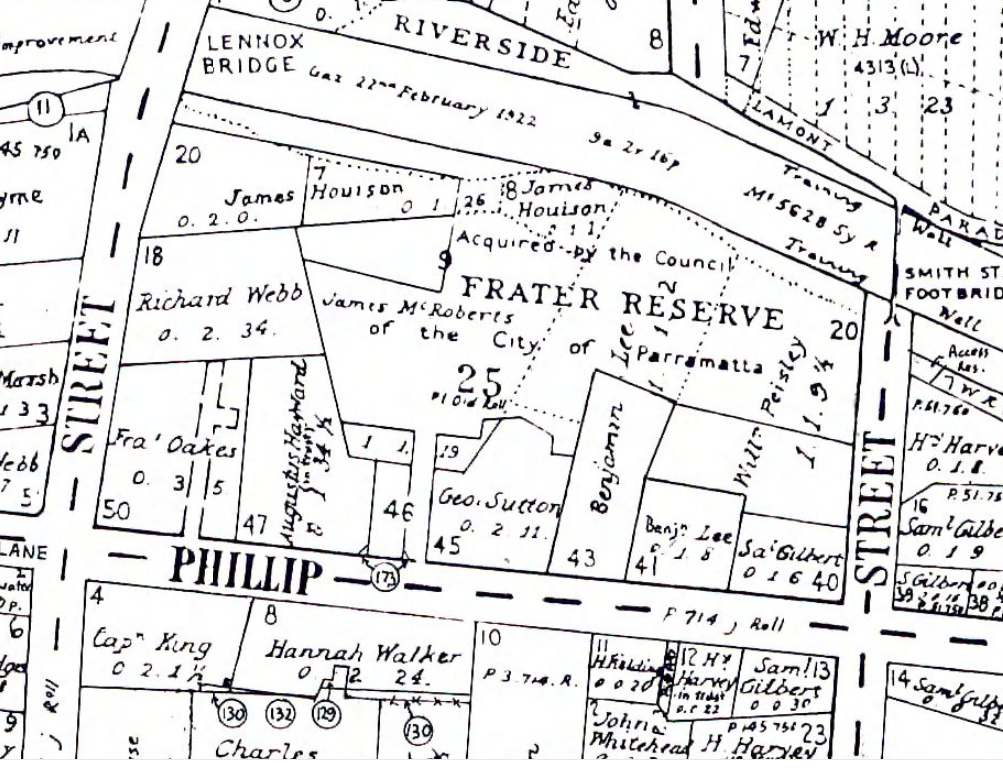 For thousands of years this Parramatta riverbank location was an important foraging site for the Burramattagal clan of the Darug people. European settlers cleared the land including riparian zones seriously diminishing the supply of native plants and animals on which Aboriginal people relied for their existence.

The two-storey late Victorian Italianate villa known as Willow Grove until recently (December 2021) occupied the riverbank location facing Phillip Street, Parramatta. The structure was dismantled by the NSW Government to make way for the construction of the Powerhouse Museum on the site.

Willow Grove was composed of stuccoed brick construction with a slate hipped roof, a two-storey return verandah featuring a cast iron balustrade to the upper floor and a palisade iron fence set into a sandstone plinth adorning the Phillip Street frontage.

The long and varied history of the house which includes uses as a private home and a hospital is closely linked to the fortunes of several women owners over the years, however the European history of the site commences with ownership of the land by the first grantee Benjamin Lee, who obtained two blocks of land, Portions 41 and 43 of Section 25 of the Town of Parramatta in the mid-1800s.

Benjamin Lee died in April 1879 aged 91 years and was reportedly a person of some note in the district having a distinguished military record including serving with British forces in the Battle of Waterloo.

Following Lee’s death his estate amounting to twenty lots in Phillip and Church Streets, Parramatta was subdivided and advertised for sale by auction. The allotments covering the future site of Willow Grove were advertised as vacant building sites with “good, elevated positions, and nice sheltered spots for cottages away from the dust of the public road”.

The allotments were purchased by Thomas Henry Ellis with the certificate of title issued in the name of his wife Rebecca. Fuller’s Yearbook for the year 1885 lists that Thomas Ellis, Auctioneer was living on the north side of Phillip Street however it is not known what various dwellings and other buildings existed on the site at this time. Thomas and Rebecca Ellis lived at the Phillip Street address until Rebecca’s death in September 1890.

In November 1890 the land was again advertised for sale and was purchased for the large sum of £1,000 by Annie Josephine Gallagher (nee Hanly) who kept a draper’s shop in Parramatta and was the wife of Thomas Gallagher. Annie Gallagher was fortunate to be able to purchase the property from her own resources. The Married Women’s Property Act 1879 had a significant benefit for the fortunes of women such as Annie Hanly enabling them to manage and protect their own fiscal and real property assets as separate entities from that of their husbands.

Annie Hanly, aged twenty-four years was an enterprising young woman who utilised an inheritance from her father very wisely. John Hanly died in April 1883 leaving his daughter the sole beneficiary of an amount of £230.

A short time after the death of her father, the Cumberland Mercury newspaper of 21 July 1883 announced the opening of A J Hanly, Cash Millinery and Drapery Shop in Church Street, Parramatta to be known as ‘The Sydney Gem’. The large advertisement outlined an extensive range of merchandise including a lovely selection of dress fabrics, adornments such as ribbons, feathers and laces as well as haberdashery, hosiery, underclothing and gloves.

Annie married Thomas Gallagher in April 1884 St Patrick’s Catholic Church Parramatta but continued to advertise her shop in her maiden name for the next twelve months possibly because she had established regular clientele and didn’t wish confusion to arise.

However, in March 1885 an announcement was made in the local newspaper stating that “owing to the great increase of business this last twelve months T F Gallagher (Late A T Hanley)” was moving to a “large and commodious shop” previously occupied by Mrs Gregg. Her business now offered a dressmaking service boasting that the dressmaker was of “the very highest London and Sydney reputation who has lived 12 years at Farmer and Co.’s”.

The great success of the business was partly attributed to the first-hand commitment of Annie Gallagher in the millinery department, the advertisement stating that “there is so much salary saved” by her involvement in the buying of designs and management of the department. This strategy enabled the savings to be passed on to customers with the shop motto being “Small Profits, Quick Returns”.

The address of the new premises was given as The Arcade in Church Street. Later advertisements indicate the extent of the expansion on the shop floor as the premises became known as Gallagher and Hanley’s Arcade and then Gallagher’s Arcade and sometimes Gallagher’s Great Arcade!

The business continued to prosper enabling the purchase of the land and subsequently the construction of Willow Grove in Phillip Street. On the 3 December 1890 an advertisement was placed in the Cumberland Mercury calling for tenders for the construction of a cottage for F T Gallagher in Phillip Street, Parramatta. [10] The building was designed by colonial born architect Sydney Moore Green of Pitt Street Sydney and would have cost a substantial amount.

Sadly, at the age of only 35 years Thomas Gallagher passed away at his home in Phillip Street on the 3 November 1891. His enjoyment of their gracious residence was short-lived and Annie had lost both her business partner and her partner in life.

A year later, in August 1892, Annie completed the building work which was planned prior to the death of her husband. The tender was advertised for the erection of the front fence ‘stone pier and dwarf wall and iron railing’ presumably with the name of the gracious residence Willow Grove inscribed on the gate posts for all to notice and admire.

Thomas Gallagher had recently been elected to Parramatta Council and the Gallaghers were active participants in the community life of the town. At Christmas in 1887, the Gallagher’s business generously provided the costumes for the Christmas pantomime held at the Victoria Theatre in Parramatta playing to packed houses.

The Gallaghers also gave generously in support of the Catholic Church at Parramatta contributing three guineas in April 1888 towards the building of the Marist Brothers residence in Pennant Street.

Annie Gallagher continued to expand her business. Apart from regular eye-catching advertisements in the Cumberland Mercury newspaper, Annie also tried other techniques to promote her stock. In June 1895 she decided to place some merchandise on the footpath, probably hoping to catch the eye of passers-by who may then enter the shop to inspect what other wares she had on offer. This promotional exercise was contrary to local by-laws and unfortunately attracted the attention of the police. She was fined several times in the Parramatta Police Court for placing merchandise on the footway. [15] Thomas Gallagher had previously been fined for the same misdemeanour in April 1891.

The 1890s was a time of financial crisis and economic depression across the Australian colonies. This decade was characterised by a sharp decrease in British investment in the colony leading to a banking crisis and the collapse of the Melbourne property market. In Parramatta, businesses large and small struggled to continue and between 1890 and 1895 there were over one hundred local bankruptcies.

Where many other businesses had failed Annie Gallagher was able to continue and prosper. In April 1894 she advertised a ‘Great Winter Fair’.

"During the past year Banks have collapsed, Syndicates have vanished, in fact, the whole Financial Fabric has tottered to its very foundation. But, throughout all changes Gallagher's Arcade stands unrivalled, unrivalled for the great Variety, Style, Quality, and General Excellence of the Goods as well as for the extremely Low Prices asked"

A dizzying array of stock at reasonable prices was advertised, appealing to “Working Men” as well as “Careful Housewives” and “Each and Everybody”. The merchandise was affordable for everyone and Annie was careful to not convey the impression that the stock was exclusive and therefore expensive.

In the late 1890s Annie took out several mortgages which she repaid and her business appeared to be doing well as in August 1899 the renovation and modernisation of Gallaghers Arcade was advertised in the Cumberland Argus. "…a magnificent Arcade upwards of one hundred and fifty feet long, broad in proportion, and nearly thirty feet high…Six patent reflecting skylights are arranged in the roof, and nine windows in the sides, as well as the front windows let in a flood of daylight as such is seldom achieved in-doors.

She took out a loan from a local solicitor as well as becoming indebted to the firm of W & A McArthur Ltd.

By the beginning of 1903, Annie’s creditors began demanding payment. James Robertson, Priestly and Coy places an advertisement in the Sydney Morning Herald calling for all claims to be made known or otherwise would not be recognised for payment. Annie’s assets were to be sold off in an effort to pay her debts.

Firstly, the contents of her home Willow Grove were auctioned off on the 3 March 1903 and then her other assets including the stock and plant of her shop and the house itself were advertised in the newspaper.

From the description, Willow Grove included all appointments and conveniences demanded in the day by the gentleman and his family. There were six bedrooms, both dining and breakfast rooms as well as stable, coachhouse and man’s room.

"LOT 3 — Brick Villa Residence, No. 2 Phillip street, Parramatta, substantially built and well finished, containing drawing, dining, and breakfast rooms, kitchen, and six bedrooms, together with coachhouse, stable, man's room, and all necessary offices, on land having a frontage of 100 feet to Phillip-street, by a depth of about 420 feet, covering an area of 3 roods 22 perches. Title Torren"

The stock of Gallagher’s Arcade was purchased by G T Erby and sold off “at considerably below cost” at his premises, Wycombe House Parramatta.

Willow Grove did not sell immediately and was readvertised for auction in July the same year. The property was purchased by W & A McArthur Ltd in July 1903 and so the Gallagher’s association with Willow Grove had come to an end. Unfortunately, Annie’s money problems were not over, and she was declared bankrupt in 1906.

Annie Gallagher passed away at Darlinghurst on the 9 January 1924 and was buried with her husband Thomas in Rookwood Cemetery. She was survived by two of her four children, Mildred and Leslie.