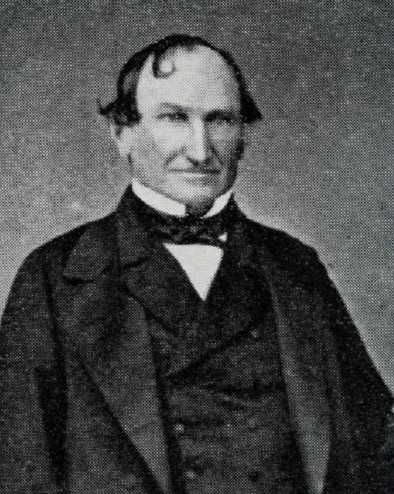 James Pye was the sixth child born to John and Mary Pye. He was born in Toongabbie in 1803.

When his father passed away he inherited land and resources in Toongabbie and along Windsor Rds, this was in 1830.

James was prominent in many circles in the Parramatta area and held many interests and concerns during his lifetime. He played an active and long lasting role in Parramatta’s civic, social and agricultural growth.

Over his eighty-one years James Pye had many accomplishments:

James Pye was married twice. At first to Sarah Best and then to Elizabeth Hibbard. Together they had a number of children, including; George, James, John, William, Mary-Jane, Thomas, Elizabeth, Sarah, Mercy and Amy.

James Pye passed away on the 30 December 1884 after being knocked from his horse by a runaway horse and cart. He was at his home Rocky Hall and is buried at St John’s Parramatta. He was survived by his wife Elizabeth and children.

(From The Cumberland Mercury, Januray 3rd, 1885) … Alderman James Pye succumbed on Tuesday afternoon to the effects of the injuries he received by being knocked off his horse by a runaway horse and cart on Monday morning.

The deceased gentleman was the fourth son of the late John Pye, of Toongabbee, and was born on the 18th March, 1803, being therefore, at the time of his death, 81 years of age. From the little that can be gathered concerning his early life, it appears that he went to school for a period of about eighteen months in Sydney and this seems to have been the extent of his education, apart from what might have been gained under the parental roof. In those days the facilities for obtaining an education were not very great, schools were few and far between and the means of communicating with the metropolis were slow. Mr. Pye was, however, endowed with great natural ability, and this, to a certain extent, compensated for his deficient education. Like his father, he chiefly followed agricultural pursuits and was at one time very expert with both the plough and sickle ….. In 1856 Mr. Pye became a member of the first Legislative Assembly under responsible government and in conjunciton with the late Sir John Bayley Darvall, represented the North Riding of the County of Cumberland, but in 1861 retired …. At the first Parramatta Municipal election, in 1862, (sic.) Mr. Pye was returned at the top of the poll as one of the aldermen and he remained up to the time of his death a member of the Council.

He also occupied the position of Mayor from 17th February, 1866 to the 18th of February, 1867. At that period the Council was in great financial straits, but Mr. Pye generously became security for an overdraft in order to enable it to tide over its difficulties ….. Previous to the election for Forrest Ward in 1882, Mr. Pye had announced his intention of retiring form Municipal life but at the last moment was nominated and without any effort on his part, was re-elected. It may be said he died in harness, for at the time he met with the accident which brought about his end he was conveying to town a report he had received from Mr. Moriarty on the state of the dam wall at Hunt’s Creek. Mr. Pye has been described as the “father” of our water supply scheme and it is not too much to say that had it not been for his perseverance, energy, and liberality the water would not have been brought into the town as early as it was …. In addition to allowing the stone of which the dam is built to be quarried on his land free of charge, Mr. Pye presented to the Council the site in which the engine house stands.

His exertions in connection with the erection and distribution of fountains throughout the town are too well known to need mention here, and it
only remains to be added that as trustee of the Anderson bequest fund he discharged his duty in an eminently satisfactory manner. Mr. Pye took a leading part in securing the people of Parramatta the beautiful block of 500 acres of land known as Parramatta Park.

In 1863 he was appointed a member of the Local Board of the new National school proposed to be erected in Parramatta and it was mainly owing to his exertions that the site was secured and the building now known as the Parramatta North Public school was erected. Mr. Pye generously came forward and became security for the entire amount to be raised and had it not been for his action Parramatta would probably not have possessed such a building for years to come.

He was also for years a member of the District Council …. The church of All Saints, Parramatta North was indebted to him for several donations. Mr. Pye’s fame as an orange grower has spread far and wide throughout the colonies …. His orangery has frequently been the scene of a visit from distinguished agriculturalists … It is said that he spent an enormous sum of money on his Rocky Hall estate …..

The deceased gentlemen’s funeral took place on Wednesday afternoon … The remains were conveyed from Rocky Hall to St. John’s Church ….. Canon Gunther again officiated at the cemetery, and the coffin was lowered into the family vault ….