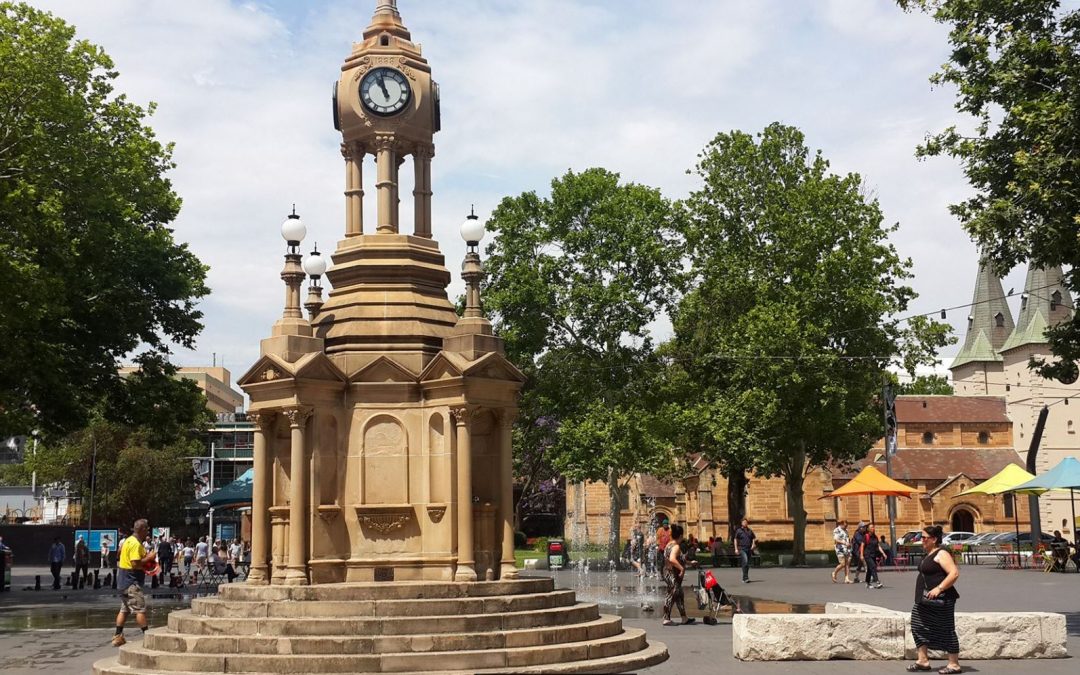 Devices have been used to measure the concept of time for thousands of years – from the tracking of the sun by obelisks and dials, to the use of hourglasses and waterclocks, through to the development of mechanical and, later, digital time-pieces.

Glancing at public clocks as we pass through the Parramatta area connects us to a collective sense of time, and we use our watches and mobile phones to measure out the hours of our everyday lives.

For the traditional owners of the Parramatta area, the Darug people, time is considered less as a chronological resource and more as an eternal quality, moving across past, present and future, drawn from the cosmology of ‘the Dreaming’.[1]

We’ve been thinking about the measurement of time across Parramatta, and have compiled a list of our five favourite local clocks below:

One of the most well-known clock towers in Parramatta is not really a clock tower at all, it is The Centennial Memorial Fountain.

The fountain itself is the last surviving legacy of Parramatta’s expansive Centennial Celebrations of 1888 – although the clock on the top was not installed until 1909.

The memorial stood in the middle of a small park within the Church and Macquarie Street intersection until the site was absorbed into the pedestrianised Church Street Mall in 1986. The memorial remains a major focal point of the public space, now known as Centenary Square. 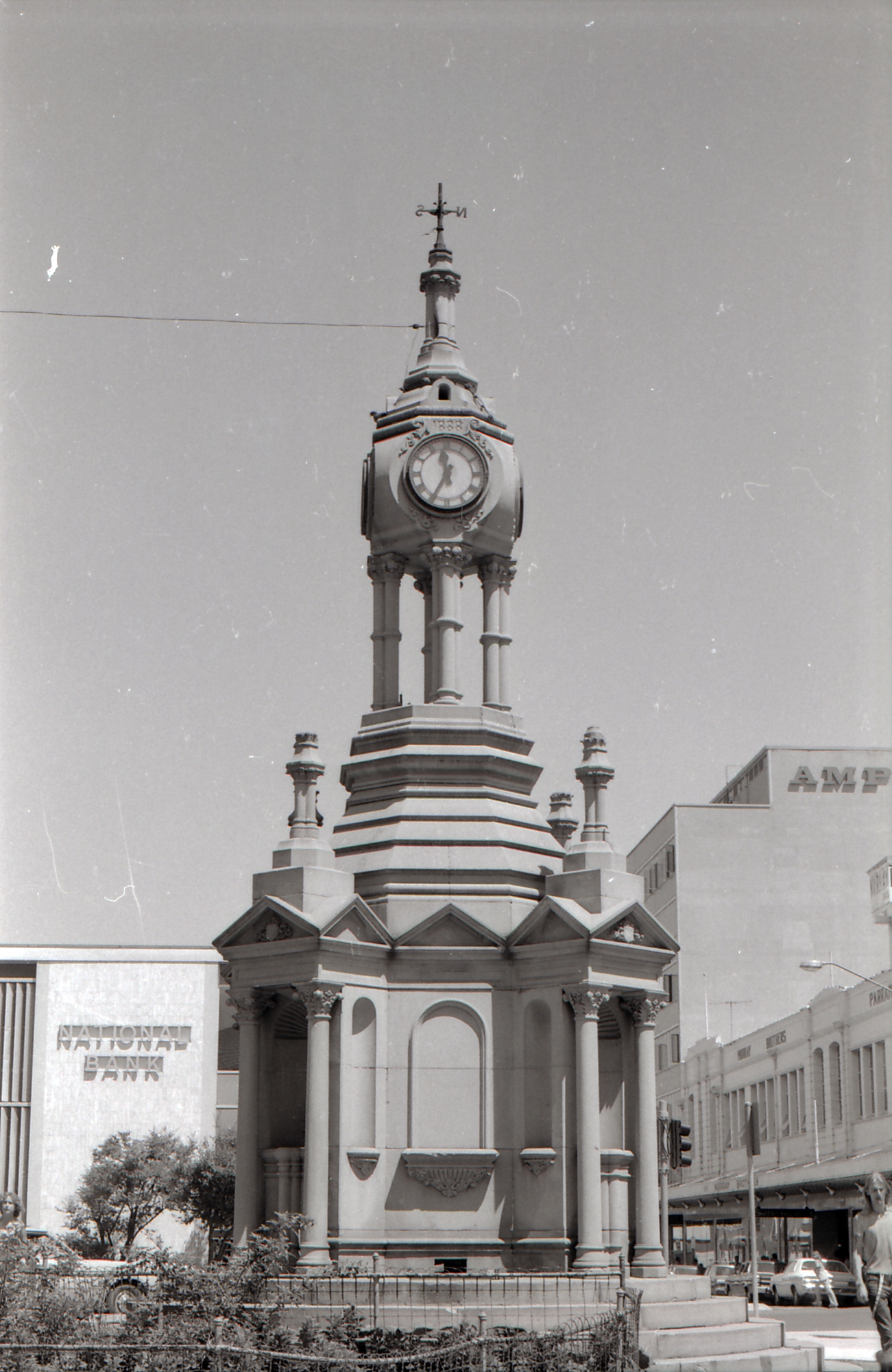 Another well-known public timekeeper in Parramatta was the A.R.C Thomas “square clock” that formerly stood in Civic Place.

The unifying quality of a Civic clock was first raised by the Parramatta Town Clerk 1984. In April 1985 Council received a letter from A.R.C Thomas, a well-known local businessman, former Alderman and Mayor of Parramatta, generously enclosing a cheque being full payment for the clock as a gift to the people of Parramatta.

The clock installed consisted of four faces and was housed in a square casing supported by a single column, with an octagonal base of sandstone to compliment the Council Administrative Building which at that time stood beside the Parramatta Town Hall.

Initially the clock was powered by two batteries that had to be changed every 100 days. In 1994 the clock was connected to the electricity supply.[2]

Due to the extensive redevelopment work being undertaken in the area, now known as Parramatta Square, the clock has been placed in storage for possible future relocation.

Clocks, with their obvious connections to the passing of time, are often selected as appropriate public structures for the memorialisation of admired public figures.

One such memorial, the Gollan Clock Tower, stands in Parramatta’s Prince Alfred Square, close to the corner of Church Street and Victoria Road. Erected in 1954, the clock tower commemorates the services of the Honorable G C Gollan, Member of the Legislative Assembly, who represented Parramatta for 21 years.

As a reminder that clocks have animate qualities, in need of attention to remain operational and relevant, it is interesting to note that the Gollan Memorial Clock Tower caused confusion and consternation for locals over many years, by showing conflicting times on its multiple faces. Finally, in 2003, technology was installed that enabled the time displays to be controlled by a master clock.[3]

Video footage of the construction and unveiling of the Gollan Memorial Clock Tower, Parramatta, 1954 (Source: City of Parramatta Council Archives, PRS77/0031 and 39)

The ‘Babes in the Wood’ clock

So it is with a collection of rusty, broken clock fragments, discovered in 1989 during an archaeological dig at the corner of Smith and George Streets, Parramatta, that are now held in Council’s Cultural Collections. The site is known to have been the location of two convict huts from 1790, and then the famous Babes in the Wood hotel from about 1810, until it was demolished in the 1880s.

It is fascinating to consider – to whom did the clock , when it was in working order, belong? When, why and how did it become entombed in the earth of a site that now stands in the centre of Parramatta’s frenetic central business district? 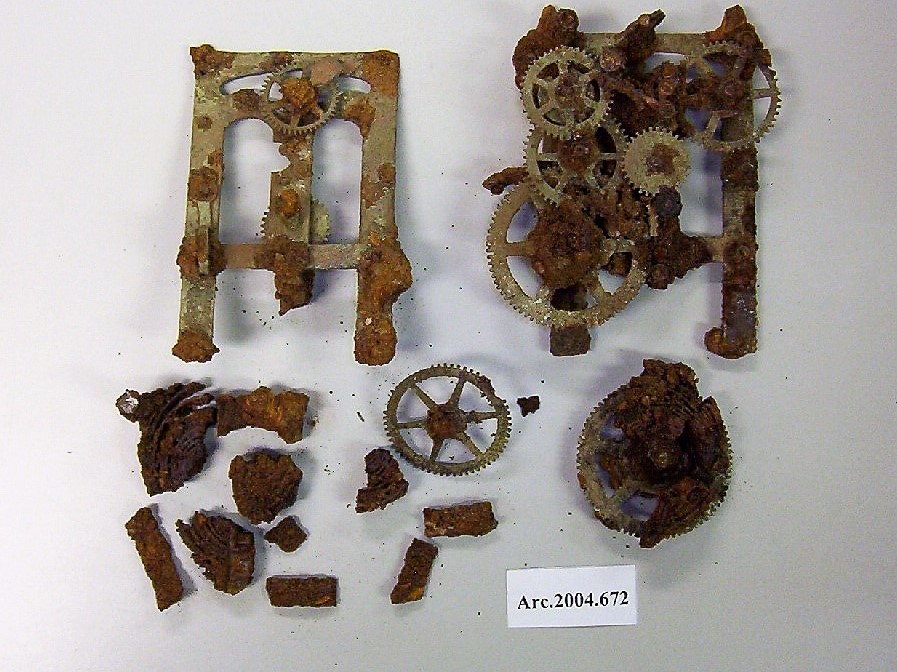 Parramatta lays claim to historic “sibling clocks” that were among the earliest public clocks in Australia. [4] The two turret clocks, made to the same specifications by the famous British clockmakers Thwaites and Reed, were gifted to the Parramatta by King George in 1821. One of the clocks was installed in the tower of the newly completed Female Factory and the other in St John’s Cathedral.[5] 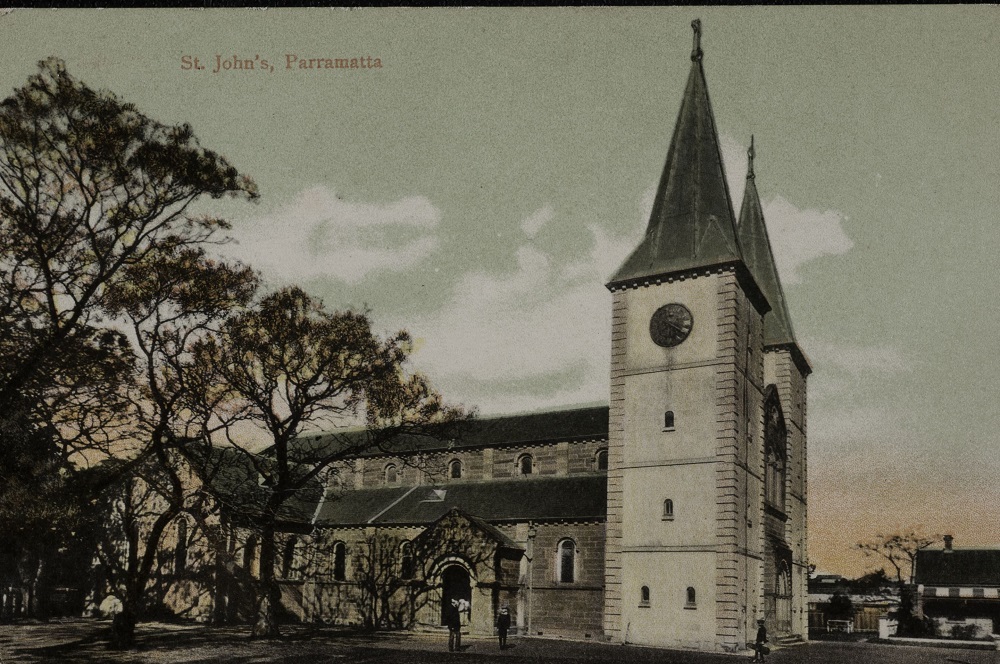 There are many other interesting keepers of time across our area, including the clocks at Old King’s School and Dundas Town Hall, and the sun dials in Parramatta Park and Sydney Olympic Park. Do you have a favourite example of timekeeping in Parramatta that doesn’t appear on our list?