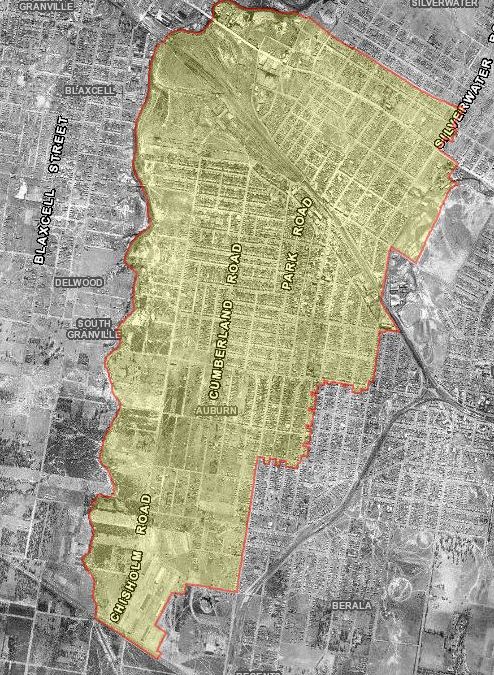 The original inhabitants of the Auburn and Homebush Bay regions are recognised as the Wangal (or ‘Wann-gal’) and Wategoro people of the Eora/Dharawal language group.[1] The Auburn area is located on the border between the Darug inland group and the Darug and Dharawal coastal groups. It was once used by Aboriginal people as a marketplace for the exchange of goods, a site for ritual battles and a ‘Law Place’ for ceremonies. The original vegetation of the area was open forest, dominated by woollybutt red gums, with grey box, ironbark and stringy bark. The land is slightly undulating, with a minor ridge running south along Park Road and a gradual slope west towards Duck River.[2]

Governor Phillip rowed up Parramatta River with an exploring party in April 1788. They landed approximately where Duck River meets Parramatta River, and walked to the present site of Parramatta. Returning, they saw ducks, which the creek and the river are named for. [3] Captain John Hunter and Lieutenant William Bradley sailed up what is now known as the Parramatta River, as far as Homebush Bay. Captain Hunter was the first white person to set foot within the Auburn Local Government Area. Ten days later, the Governor, along with a well-armed party in three boats, reached Homebush Bay. They ventured about 3 kilometres inland. The following day a party of explorers traced the river in a westerly direction, coming to the place where the Duck River enters the Parramatta River. They explored the tributary as far as the depth of water permitted. Seeing what appeared to be ducks rising out of a swamp covered with reeds, they named the river Duck River. The ducks were actually Eastern Swamp Hens, but the name Duck River remained. The Eastern Swamp Hen featured prominently on the Council’s Coat of Arms and was part of the former Auburn City Council logo.[4]

Before the district of Auburn was recognised as a suburb in the late 1970s, it was known as Liberty Plains.5 ‘Liberty Plains’ is believed to owe its name origin to the fact that the first free settlers (non-convict) in the colony were granted “liberty to choose the site of their [land] grant’6 by Lieutenant-Governor Francis Grose (1754 or 1758 – 1814)7 The settlers arrived in Port Jackson per Bellona on 15 January 1793 and were Thomas Rose (120 acres), Frederick Meredith, Thomas Webb, Edward Powell and Joseph Webb who selected farmlands near Homebush and Strathfield8 which was signed off by Grose on 7 February 1793. The name ‘Liberty Plains’ is still used to designate the adjoining Parish.

From Sydney to Parramatta

A track from Sydney to Parramatta was developed early in the 1790s, though the river remained the main means of transport. The track ran about a mile south of the current Parramatta Road. Land in the area was granted to free settlers and ex-convicts. Most grants were small, often only 30 to 100 acres (12 to 40 hectares). Larger grants were given to prominent merchants and officials, such as James Chisholm, a merchant who received 600 acres (240 hectares). The first areas to be taken up were along Parramatta Road and the river. Thomas Bates received a grant on 1 January 1806, as did Thomas Francis. Land to the south was not taken up until the 1820s. [4] By 1828, there was a thin spread of settlers. These included James Wright, who conducted a hotel on his grant of 1823. Other hotels and inns soon appeared, providing food, lodging and liquor to travellers. Private coach services ran along Parramatta Road, but a regular service did not emerge until John Raine’s began in 1823. Coaches ran until the railway took away their passengers. The soil proved too poor for agriculture, but early industries included timber-getting, and brick-making, which began with the establishment of the Duck River Brickworks by Charles Linney.

The arrival of the railway and Naming of Auburn

The first railway from Sydney, opened in 1855, ran to Parramatta Junction (now Granville) and made suburban development possible. In 1878, a large estate owned by John Yelverton Mills (1841-1924) was surveyed and subdivided for the railway line. Mills initially wanted his subdivision to be called Burford, after the Oxfordshire town his parents hailed from. However, Burford was rejected by the Railway Department to avoid confusion with the existing suburb of Burwood. Thus, Mill named this subdivision Auburn in honour of the village of which Oliver Goldsmith wrote in his well-known poem, “The Deserted Village” (What’s in a name, Golden Press 19859). The poem commences with the lines:

The sale of the estate took place on 1 June 1878. An advertisement in The Cumberland Mercury (25 May 1878, page 5) drawing attention to the sale after quoting Goldsmith’s lines, states:

“So wrote the poet in years gone by in describing the Auburn of old England, and well does It describe the new Auburn of the sunny South.”

From the 1860s to the 1880s, a number of main roads were officially aligned and gazetted through the area. The New South Wales government also began buying small lots of railway rolling stock locally and from the 1870s onwards seek tenders.

In 1880, when local residents sought a postal service at the railway platform, a postal inspector reported that there were about 40 residences with a population of about 200.

Around 1884 Henry Vale & Co moved to Auburn, where they built a number of locomotives. [16] Contracts continued throughout the 1880s. By 1888, the firm had built 42 engines, of which six were suburban tank engines for the government.

RA Ritchie of Parramatta also obtained some of the railway contracts, but passed the work to Hudson Brothers, which had a large works at Clyde and had absorbed Ritchie’s company.

Ritchie Brothers, a separate enterprise started by his sons, began operations in Auburn about 1884. [20] The plant was near Auburn station, with a spur line running into the works. By 1911, it was employing 500 men manufacturing railway rolling stock, wagons, and agricultural implements, as well as carrying out general engineering work. [21] Its agricultural machines, such as wool presses, wheat strippers and binders, won numerous prizes.

There was only a single store in Auburn in 1885, but within a year others had been established.

The first bank is believed to have been the City Bank, established in 1892.

Borough of Auburn proclaimed 19 February 1892 and the first meeting of Auburn Council held on 13 April 1892 in Lee’s Temperance Hotel at the corner of Mary Street and Park Road, Auburn. The foundation stone of the first Auburn Town Hall, incorporating a post office, on Auburn Road was laid in 1896 by the Postmaster-General, Joseph Cook. Designed by E. A. Henry and built by Wilkins & Fewster of Granville, the town hall was also officially opened by Cook on 29 June 1898. The government built many workers’ houses in the area and helped set up semi-public bodies to do the same.

In 1905 the Auburn Brick, Tile & Pottery Company was set up in Princes Road, taking over the business of the Duck River Brickworks. The new company pressured the railway department for a railway to Regents Park, particularly since it wanted a line to allow better access to markets. Initially successful, the company went out of business in September 1935.

Addition of Newington ward on 20 June 1906 with the hitherto unincorporated area around Silverwater and Newington was combined into the Municipality of Auburn, becoming the “Newington Ward” returning three aldermen

On 12 January 1911, the Clyde Brick Company was incorporated and operated on a site bounded by Beaconsfield, Newton and Carnarvon streets.

In 1914, Mashman pottery was established on Parramatta Road near Hampstead Street. Auburn was one of the principal shopping centres on the railway line between the city and Parramatta, with only Burwood as a serious competitor.

In 1916, Purcell Engineering, formed which manufactured drilling and grinding machines, precision lathes and oil locomotives, which were used in cane fields and on construction projects. [22]

During the 1920s, chain stores came into greater prominence and they began to suck away the custom of the smaller, family-owned stores.

in 1926–1927 a second Town Hall which was designed by the mayor, Albert Thomas “Benny” Briggs, and built by H. M. Crouch on the site of the first Auburn Town Hall.[11][12] The former Auburn mayor and then state Premier, Jack Lang, laid the foundation stone on 6 November 1926 and officially opened the building on 12 July 1927. On the official opening, Lang declared:

“When the old Town Hall in Auburn, which is being demolished, was opened in 1898, the population did not exceed 2000; while to-day the town has grown so rapidly that, to say the population exceeds 20,000, is a conservative estimate, and Auburn has outgrown its Town Hall.“[13][14]

Local shopping centres reached their peak in the 1930s, when disposable income rose, but few could afford a car.

One of Auburn’s most famous sons was Jack Lang who, as New South Wales premier in the 1930s Depression, irritated the forces of conservatism and transgressed the principles of sound government. Lang had previously worked for Robert Harley in his Auburn real estate office. In November 1901, Lang set up business with HH Dawes in opposition to Harley. [24] Lang also became active in the local Labor Party, eventually being elected to the New South Wales Legislative Assembly, and finally becoming premier. Lang and his government were summarily sacked by the New South Wales governor, Sir Philip Game, on 13 May 1932.

Amalgamation of Auburn and Lidcombe on 1 January 1949

In 1993, Council was rebranded “Auburn Council”. Auburn City Council proclaimed 24 June 2009, gazetted 17 July 2009. Following the dismissal of Auburn General Manager John Burgess in March 2013, the corruption and issues within Council was exposed. This led to the suspension of council in 2015. Auburn City Council was abolished on 12 May 2016 and officially became part of the new Cumberland Council.

By the late 1950s, the regional shopping centre had arrived in Sydney, with detrimental impacts on local ‘high street’ shops. The redevelopment at Parramatta, which included branches of Grace Brothers and David Jones department stores, particularly affected Auburn. On the other hand, the decline of the small corner shop appears to have been arrested by the diverse ethnic mix of the district. Many still function, selling goods in demand by people from varied cultural backgrounds.

In the immediate postwar period, growth was boosted by government initiatives: the Housing Commission was active, planning an initial group of 83 houses. But it was the gazettal of the Strata Title Act of 1961 that had the greatest impact throughout the suburb, permitting the erection of multi-unit housing blocks. Later still, ‘cluster development’ from the 1970s onwards alleviated the worst aspects of the standard home unit blocks.

By the 1960s and 1970s, the number of Middle Eastern immigrants settling in Auburn had grown, making Auburn one of the main Arabic/Middle Eastern centres in Sydney, vying only with Canterbury.

On 10 July 1965, the Auburn Administrative Building was officially opened by the Mayor, Stanley Hedges. It was situated at the rear of the existing Town Hall on a block fronting Susan and Queen Street, Auburn and was completed at a final cost of AU£198,000.[15]

Auburn Botanic Gardens,was officially opened on 11 September 1977 by the New South Wales governor Sir Roden Cutler [2] which were designed by Eric Black, chief engineer of Auburn Municipal Council from 1949 to 1979. Community groups have added a bonsai garden and an aviary to the basic plan. The native fauna reserve, set up in consultation with Taronga Zoo, is a later addition by the council’s parks and gardens department. [3]

In the 1991 census, 47 per cent of the population of the municipality had been born overseas.

In 2000 Michael Davies Architecture to create a new Civic Centre on the same site, incorporating council offices, chambers, city library and police station.[16] Council first met in the new Civic Centre on 26 September 2000.[17]. The Gallipoli Mosque, a prominent landmark beside the railway, completed in 2000.

Further resources on Auburn (NSW) in our Library Collection