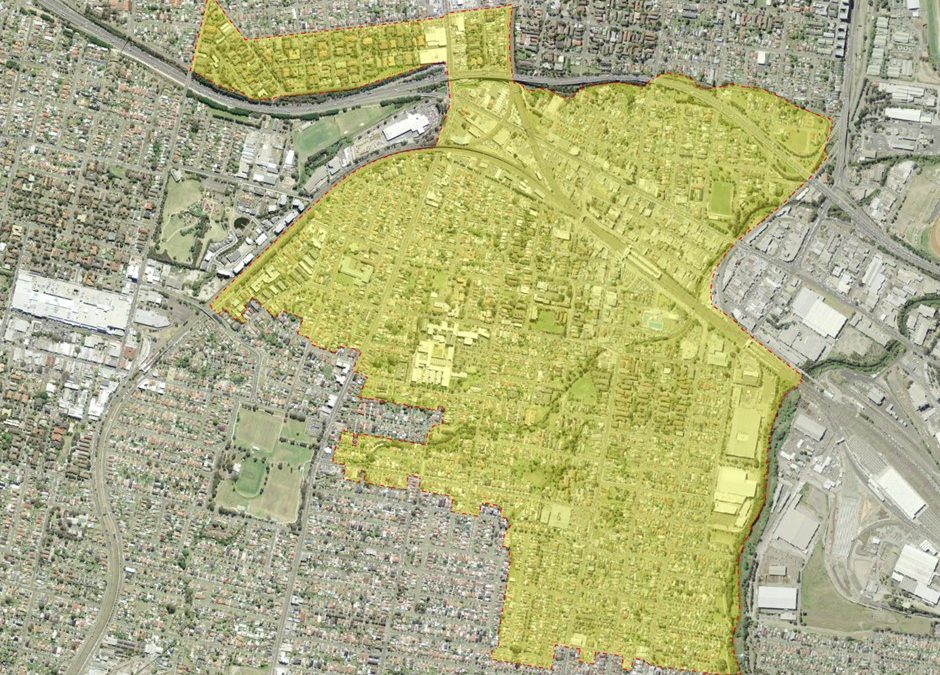 The suburb of Granville lies south of the Parramatta Central Business District and approximately 3 kilometres south by west of Dundas.  A small area of the suburb bounded by the railway line, A’Beckett’s Creek, Woodville Road, Raymond Street and Tottenham Street lies within the Rosehill Ward of the City of Parramatta. The remainder of the suburb lies within Cumberland Council.

The area which is now the suburb of Granville covers Darug nation lands which had been occupied  for thousands of years prior to European settlement. Largely occupied by the Burramattagal, but also the Wategora and Bidjigal, the area was also a significant meeting place for the Cadigal from the east. [1]

It was Governor Arthur Phillip, who with an armed party whilst exploring the Duck River in one of the small boats of HMS Sirius, who first saw the country around Granville on the 16 February 1788. In 1789, a convict named ‘Black’ Caesar discovered an Aboriginal walking track that led from Sydney to the early establishment on Parramatta River called Rose Hill. This was the beginning of a cleared track which later became Parramatta Road as it passes through Granville.

The most important Granville land grants were given to James Ruse, John Macarthur, Thomas Keele, Thomas Davies, John Harris, William Charles Wentworth and Garnham Blaxcell. The 100 acre grant of land made to Davies, who was a Lieutenant of the New South Wales Corps, was the first grant of land in the Granville area, and was located not far from Woodville Road. This grant was consolidated into Garnham Blaxcell’s grant, which remains the most significant of the grants in the early history of Granville. The grant of 1,125 acres that he received in 1806 was called the Drainwell Estate, and constitutes a large part of the modern suburb of Granville. Blaxcell had received the grant from Governor Philip Gidley King. After his arrival in Sydney in 1802 he held several official positions including acting provost-marshal and deputy-commissary, and participated in the Rum Rebellion of 1808.

As a result of mounting debts, his grants were passed to Sir John Jamison who used the land for grazing. Jamison named a part of the estate Dog Trap Farm, as there were many wild dogs in the area at the time that were considered a pest, and there many wild dog trappers pursuing the bounty offered for the capture of the dogs. Governor Charles Fitzroy in the 1840s established a club to hunt the wild dogs. A major road in Granville, Woodville Road, was formerly called Dog Trap Road , referencing this history. The name was changed in 1879. [2]

After Jamison died in 1844, the estate was inherited by his daughter and his son-in-law Captain William Russell. The estate remained relatively underdeveloped until the arrival of the railway in 1855, and the Drainwell Estate began to be subdivided from 1862.

The Naming of Granville

With the advent of the railway in 1855 Granville began to rapidly expand and was known at the time as Parramatta Junction as the railway (which was the first in Australia) terminated here and so was called Parramatta Junction. The suburb therefore took its name from the railway station. In 1880, a public meeting was called to begin discussions concerning the renaming of the suburb. The name Granville was chosen on 1 July 1880 to honour the Secretary for State, Earl Granville. Other names that were suggested included Drainwell, Vauxhall, and Swagsville. A few years later a petition was raised to incorporate the area as a municipality, and on the 20 January 1885 the proclamation was made and Granville was to be known as the Borough of Granville. John Nobbs became its first mayor, and the area included Guildford, parts of Harris Park, Merrylands, Rosehill and South Granville. The first meetings were held in the School of Arts until the Granville Town Hall was erected in Carlton Street in 1889. [3]

In addition to tanneries being established in the area from the 1870s, James Bergan developed a woollen mill in 1870 which manufactured tweed that was famous for its high quality. The mill operated until 1920, by which time it had operated under a number of successive owners. In 1936 the Granville Municipal Baths opened on this site. With the Byrnes Brother’s woollen mill moving to Granville in the 1880s and William Ritchie’s agricultural machinery business in 1883, Granville became known as an area of major industrial importance for Sydney. [4]

St Mark’s Anglican Church, at 39 Jamieson Street Granville, was opened in 1883, and was built on the Drainwell Estate. It was designed by Edmund Blackett, the architect who also designed the bell tower of St John’s Anglican Cathedral in Parramatta, and St Paul’s Anglican Church in Burwood. The builder was William Thackery. The church was extended in 1920, but due to financial difficulties the work was only completed in 1922.

Granville and its suburbs were amalgamated with the City of Parramatta in 1948. Post-war migration policies, combined with the baby boom saw the population of Granville increase. The NSW Housing Commission built estates to meet the demand for new housing, and the suburb expanded economically.

In the 1970s, the original Clyde Engineering factory closed. Clyde Engineering was a heavy engineering company that moved to Granville in 1883. The company formerly known as Hudson Brothers, had many large-scale contracts, which included building rope driven sheaves used in the tramways, marine engines and steam locomotives. [5]

The Granville rail disaster remains New South Wales’ worst rail disaster. On the morning of the 18 January 1977, eight-three people were killed and 210 injured when the Mount Victoria to Central train ran into the supports of the overhead bridge, resulting in the bridge collapsing onto the carriages. A memorial garden at Railway Parade and Carlton Street, Granville, commemorates those who died or who were injured in the disaster. The garden contains a black granite memorial which lists the names of those who lost their lives, and every year 83 candles are lit to commemorate those lives.

The City of Parramatta is working with the NSW Government to revitalise public spaces as part of the Parramatta Road Urban Amenity Improvement Program (PRUAIP). This program provides funding to local councils to develop open spaces and plazas, cycle paths, playing fields and streetscape improvements along the Parramatta Road Corridor.  As part of the commitment to the PRUAIP, Council is reviewing the recreational and community requirements provided at FS Garside, the adjoining Community Centre (1 Onslow Street), Scout Hall and open reserve along Duck Creek to inform the design of the North Granville Community Facilities Masterplan. The Masterplan will guide improvements to community and recreational facilities to support the needs of the future Granville community. [6]