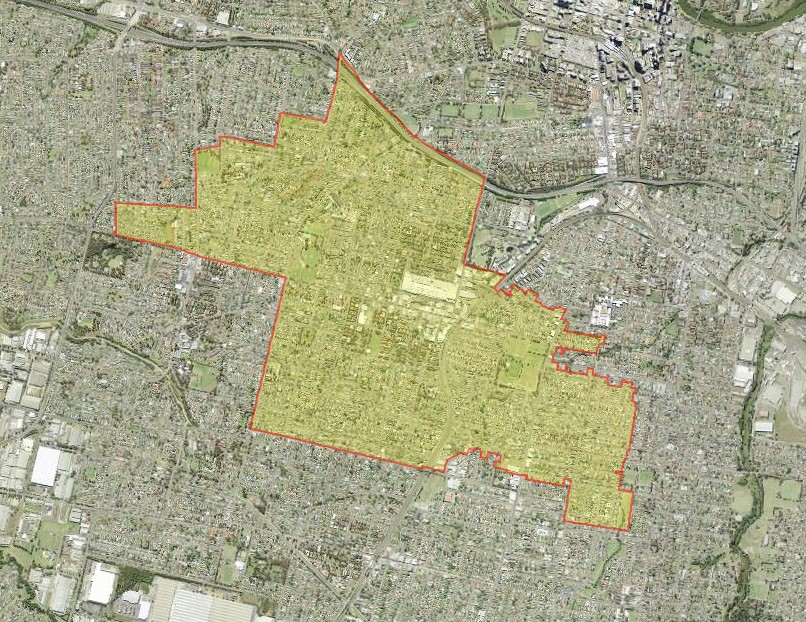 The suburb of Merrylands lies within Cumberland City Council, approximately 3 kilometres south-west of the Parramatta Central Business District. A small area of the suburb comprising the M4 Western Motorway from Mays Hills and Burnett Street ramps to Pitt Street lies within the Rosehill Ward of the City of Parramatta.  This short stretch of the M4 Motorway, which was already planned by the late 1960s, is constructed within Merrylands but is part of the City of Parramatta.

Most of Merrylands covers Dharug land occupied by the tribes of the Burramattagal around Parramatta, the Boot-Bain-Ora near Wentworthville, and the Toongagal at Toongabbie.  There are significant archaeological remanants along rivers and creeks and there is strong evidence the tribes met for gatherings and initiation ceremonies and possibly some bartering. Encounters between the settlers and the Aboriginal people was not always amicable.  As European settlement progressed, the bush was cleared for farming and the number of native animals decreased dramatically, depriving the indigenous population of their food. The Aboriginal population continued to decline, and at the time of the 2016 Census, Aboriginal and/or Torres Strait Islander people made up 0.8% of the population of Merrylands. [1]

One of the earliest land grants made in the area was 100 acres to Judge-Advocate Richard Atkins in 1793, who also received an additional grant of 145 acres in 1798. He named his property Denham Court, and this was later purchased by John Bowman. Other important land grants include those given to Charles Walker, Benjamin Barrow and William Puckey.

However it is Arthur Todd Holroyd who has had the most significant influence on the history of Merrylands. Holroyd acquired his land at Merrylands in 1855 from the original Sherwood Estate grant of 1,165 acres made to William Sherwin in 1831. Sherwin had taken the name from Robin Hood’s forest in England.  Holroyd renamed the estate Sherwood Scrubs. Holroyd established many forms of industry on this estate including a pottery, brickworks, and an orangery. He also had a dairy which he called Merrylands, in honour of a family property in England. Naming the suburb Merrylands was suggested by Holroyd, who also became the first mayor of the municipality when it was established in 1872. [2] The suburb had also been previously referred to as Sherwood Scrubs. Holroyd died in 1887 at his home in Merrylands.

The population of the suburb rapidly increased in the 1880s as a result of the Southern Railway line from Granville to Liverpool opening. The railway station which opened on the 6 July 1878 had its name of Merrylands suggested by Holroyd. [3] Major subdivisions began in the 1860s, and industries which relied on manufacturing such as the production of bricks, tiles, pipes, warehousing and cement manufacture developed.

Municipal District of Prospect and Sherwood

In 1872 the Municipal District of Prospect and Sherwood was established, but was renamed the Municipality of Prospect and Sherwood from 1906 until 1927. In 1927, this municipality became the Holroyd Municipal Council, and in 1991 was granted city status to become Holroyd City Council. The administrative centre of Holroyd was based in Merrylands from 1962, having formerly being located in the Council Chambers in Merrylands West from 1915. [4] In 2016, Holroyd City Council merged with parts of other council areas to form Cumberland City Council. 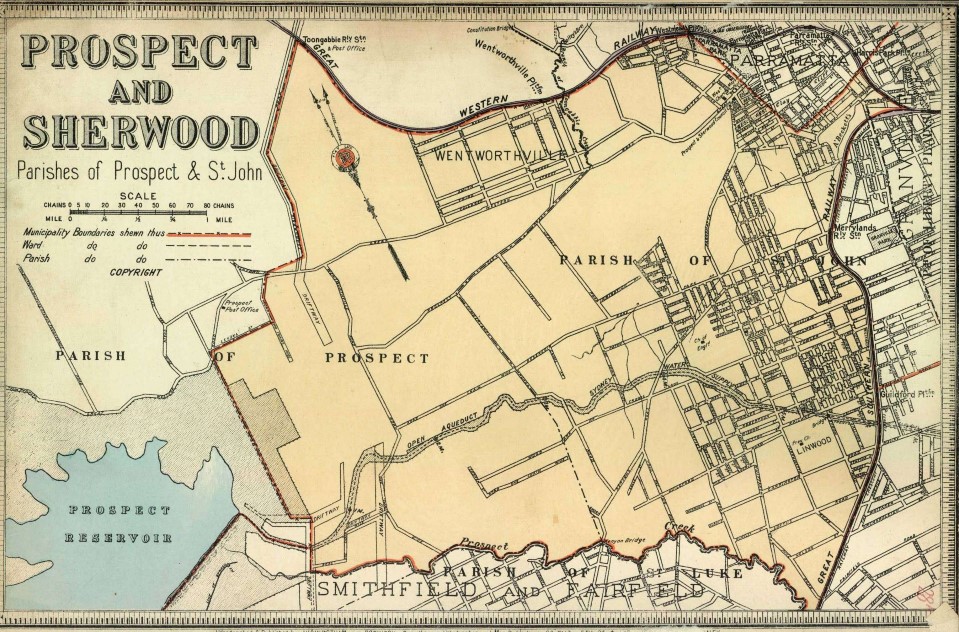 Atlas of the Suburbs of Sydney – Prospect & Sherwood 1889-1894. Source: City of Sydney Archives

On the 20 January 1885 a proclamation was made and Granville was to be known as the Borough of Granville. John Nobbs became its first mayor, and the area included Guildford, parts of Harris Park, Merrylands, Rosehill and South Granville. Granville and its suburbs were amalgamated with Parramatta Council in 1948. In the 2016 NSW council amalgamations, this section of Parramatta Council (formerly Woodville Ward) was merged with other council areas to form Cumberland City Council.

The 1950s and 1960s saw urban development significantly increase and many homes were built with large developments undertaken by the NSW Housing Commission.

St Peter’s Anglican Church originally opened as a church hall in 1906 on Western Road, but was rebuilt by volunteers at its current location of 59-63 Pitt Street, Merrylands. This new church opened in 1929, and continues to be used as a church today.

St Peter’s Church has local historical and social significance arising from its use by and associations with the Merrylands Anglican Church community since its construction in 1929. With a considerable part of its fabric dating to an earlier period when it was erected on the Western Road, the dismantling and re-construction in Merrylands provide evidence of both contemporary economic constraints and desire for church facilities in a period of considerable population growth throughout the Municipality. [5]

Granville Park, a popular recreational reserve on Montrose Avenue, Merrylands, was formerly owned by Parramatta Council, but since the 2016 NSW council amalgamations belongs to Cumberland City Council. The land was originally intended to be a water reserve for settlers who had purchased land in the vicinity, but in 1886 as a result of a deputation to the Government, twenty acres of this reserve was set aside for a park. In June 1886 it was announced that this request had been accepted, on the condition that the public would have access to the water. The park was enclosed in June 1886. [6] In 1942 the American Navy built a Naval Hospital on the site. The hospital was completed in December 1942, and by October 1943 it had six hundred beds with a staff of 170. During this time it was visited by many famous American actors, including Bob Hope. It was used a hospital by the American Navy until September 1945, and after their departure the Australian Army took over the hospital for a short time. The buildings were then used as a hostel for migrants arriving from post-war Europe. The buildings were later used by the NSW Housing Commission to provide accommodation for homeless families. The park was eventually returned to the local council as a place for recreation. [7]

Betty Cuthbert was born in Merrylands on the 20 April 1938. She grew up In Ermington, and went on to win four Gold Medals in the Olympic Games for athletics. Betty also won one Commonwealth Gold Medal, two Silver Medals, and sixteen World Records. Betty was the also the first woman to be given the Freedom of the City of Parramatta on the 10 December, 1956.

The City of Parramatta is committed to providing cycleways to encourage movement around the City. Cycling to work not only has positive environmental impacts, but also helps improve your health and creates an opportunity to explore the city. Parramatta has an extensive number of cycleways including the Parramatta to Liverpool Rail Trail, which is nearly 17km long and runs parallel to the railway line through Merrylands, Yennora and Fairfield to Liverpool. [8]