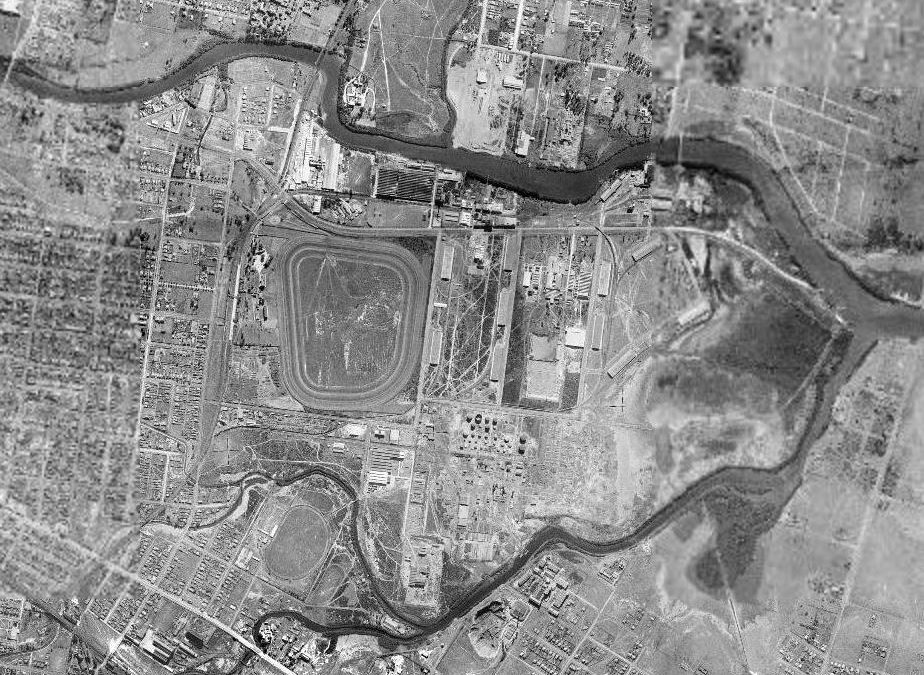 Aerial photo of the Rosehill area in 1943 showing the predominantly industrial landuse to the east, the racecourse in the centre and residential areas in the west. Source: Six Maps

The suburb of Rosehill lies south-west of the Parramatta CBD and is bounded by Grand Avenue, Camellia in the north, Duck River on the south-west, Duck Creek to the south and Good and Alfred Streets to the west. It is part of the Rosehill Ward of the City of Parramatta. The suburb has a small residential population of 3,806 persons in 2016. Of these 28.6% are Australian born, 25% from India and 6.6% from China [1]. The eastern section of the suburb between Good Street and James Ruse Drive is largely made up of medium and high density residential developments. West of James Ruse Drive, the dominant landuse is industrial with a large area taken up by Rosehill Gardens Racecourse. The frontage to Duck River is dominated by the site of the former Shell Clyde Refinery.

European history of the Parramatta District began in April 1788 with an exploration party led by Governor Arthur Phillip, which travelled along the Parramatta River and explored the Duck River area. Settlers observed a landscape dominated by tall open forest now known as Cumberland Plain Woodland with area of mangroves, saltmarsh and wetlands along the riverbanks with an abundance of wildlife [2]. For thousands of years the land around Parramatta was home, hunting ground and meeting place for members of the Burramattagal clan of the Darug people. European settlers cleared the land seriously diminishing the supply of native plants and animals on which Aboriginal people relied for their existence. [3]

Land Grants The name Rose Hill was first applied to the area now known as Parramatta by Governor Phillip in November 1788 in honour of George Rose, a secretary to the Treasury in England [4].  In June 1791, Phillip renamed the area Parramatta a word derived from the indigenous name for the area [5]. In 1793, John Macarthur received a grant of 100 acres (40 ha.) in the area now known as Rosehill. Over the next 25 years he amassed a large estate which included the property Elizabeth Farm named after his wife. He commenced the construction of the farmhouse on the property in 1793. It was described by his wife Elizabeth as “a very excellent brick building” and this surviving early example of an Australian colonial building may still be visited in Alice Street [6]. By the 1820s Macarthur’s estates covered over 1,000 acres (400 ha.) of the Parramatta district. Subdivision of Elizabeth Farm Estate In the early 1880s Macarthur’s estate was purchased by entrepreneurs, John Bennett and Septimus A. Stephen and the subdivision and sale of the Elisabeth Farm Estate commenced. Eight hundred and fifty acres of Elizabeth Farm were subdivided for industrial purposes and land was sold in three sales during February, May and October 1883. An area of one hundred and forty acres was reserved for recreation and became the racecourse [7].

Rosehill Gardens Racecourse In 1883, John Bennett commenced the construction of his racecourse which was completed by February 1885 [8]. In choosing a name for the enterprise, Bennett decided on ‘Rosehill Racing Club’, using the former name for Parramatta. To enable more visitors to attend the race meetings, Bennett gained the agreement of the NSW government for the construction of a private railway line branching off the Clyde line with a platform named ‘Rosehill’ adjacent to the course [9]. Construction of Bennett’s line costing about 12,000 pounds commenced in 1886 and opened in November 1888 [10]. The railway also aimed to serve the property subdivisions to the north of the racecourse and provide transport for the produce from agricultural districts of Baulkham Hills, Castle Hill and Dural. The single private line was taken over by the NSW Department of Railways in August 1901, and duplicated in the same year with new station buildings and platform being constructed at the site [11]. From 1943, Rosehill Gardens Racecourse was managed by the Sydney Turf Club and remained so until 2011 when the Sydney Turf Club and Australian Jockey Club combined to become the Australian Turf Club. The Australian Turf Club are the current owners and operators of Rosehill Gardens Racecourse [12].

Industrial Development The northern boundary of the suburb of Rosehill along Grand Avenue follows the route of the old tramline constructed by Charles Jeanneret in 1883 which ran from Redbank Wharf near the junction of the Duck River with the Parramatta River [13]. In 1888 a branch railway line known as the Sandown Line was constructed by John Bennett to service the industrial area along the banks of the Parramatta and Duck Rivers. Platforms along the line included James Hardy, Goodyear, Cream Tartar and Sandown. This line closed in 2010 [14]. In 1900, the Austral Meat Company Ltd. commenced construction of its plant fronting the Duck River for the production of chilled and frozen meat for export. Operations on the site commenced in December 1900 and this area later became the site of the crude oil refinery [15]. In 1925 a crude oil refinery was constructed on the southern bank of the Parramatta River near the junction with the Duck River. Known as the Clyde Refinery, the plant was built by John Fell and Co. Pty. Ltd. From 1928 until its closure in 2013 it was operated by Shell Refining (Australia) Pty. Ltd [16].

Recent times has seen the closure of most of the heavy industrial sites in the suburb heralding a change in landuse patterns. There is recognition of the value and need for the rehabilitation of degraded natural landscapes and former industrial sites to facilitate reuse of these landscapes.