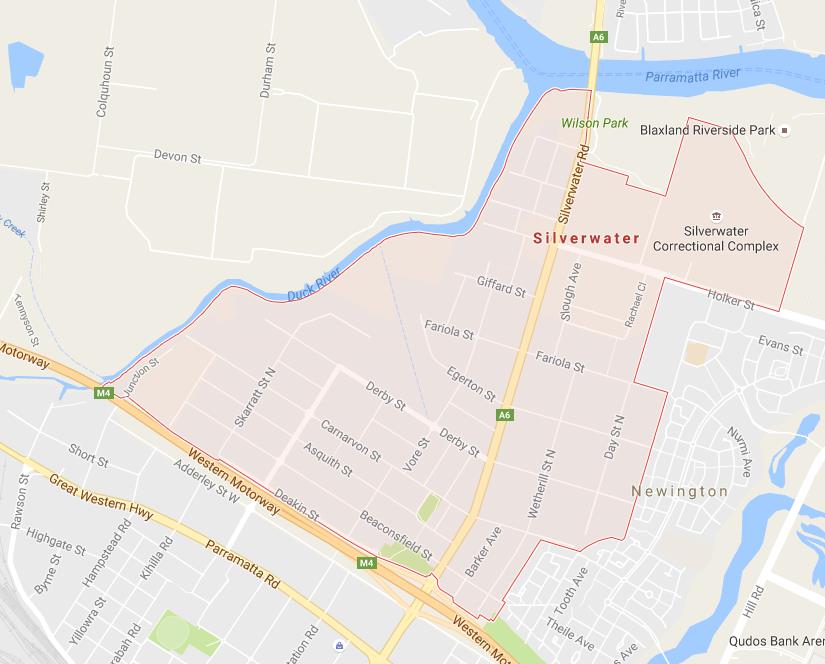 On 12 May 2016, Silverwater became part of the local government area of City of Parramatta from the former Auburn City Council (now part of Cumberland Council). It had been part of Auburn Council since 1906 after a nine year negotiation process[i].

This suburb which is located 20 kilometres west of the Sydney central business district is bounded by the Parramatta River in the north, the suburb of Newington in the east, the M2 Western Motorway in the south, and the Duck River in the west. Silverwater Road and Silverwater Bridge connects it to Rydalmere and Ermington[ii].

The traditional custodians of the land were the Wangal clan of the Eora/Tharawal culture. They lived close to the Barramattigal clan of the Dharug culture, and the two often exchanged goods[iii].

Much of its early colonial history is the same as Newington. European settlement of this area dates from 1 May 1797 when the first land grants were made to Captain Henry Waterhouse (1770-1812) and Lieutenant John Shortland (1769-1810) of the Sirius who each received 25 acres in the district of Liberty Plains, north of Parramatta Road. In April 1807, free settler John Blaxland (1769-1845) and his brother Gregory Blaxland (1778-1853) arrived in New South Wales and received a land grant of 1290 acres in the district of Parramatta which he called ‘Newington Estate’ after his family estate in Kent, England. This grant covered all the land between Parramatta River and Parramatta Road, and Duck River and Haslam’s Creek, except for land held by Waterhouse, Shortland, First Fleet marine Ian Archer’s 80 acres and Samuel Haslam’s estate. There Blaxland started his agricultural enterprise setting up a salt making factory in 1808 with an experienced salt maker (William Rutter, 1766-1812, former superintendent of Lymington Salt Works) who applied the Lymington method to produce the first usable salt in the colony from the marshes on the Parramatta River. They also breed cattle and later in 1816-17 set up a factory for the ‘manufacture of blankets and tweed’. In 1870s, the Newington estate began to be subdivided[iv].

How Silverwater got its name

The exact origins of the suburb name ‘Silverwater’ is not known. Although according to Pollen (1990), one popular theory is a reference for the silver of the morning sun and/or the night moon light reflected on the water of Parramatta River[v]. The earliest use of the name Silverwater’ can be traced back to October 1883, when auctioneers Campbell, Mitchell and company of 413 George Street, Sydney advertised the land sales of ‘Silver Water Estate’ for the Land Company of Australasia, Limited. Land sales continued until 1920 under various names – Newington, Riverside Heights, Silverwater and Suttors[vi]. Due to its close proximity to Auburn North Public School which opened in 1891, it was sometimes called North Auburn[vii]. The name Silverwater was officially assigned by the Geographical Names Board of New South Wales on 5 February 1993[viii].

Today, Silverwater is predominantly an industrial area with pockets of residential properties, parks and institutions. It has a land area of 3 kilometre square and a population of 5,043[ix]. Many businesses and factories in Silverwater have been there for over 50 years[vii]

The site also contains the heritage listed Newington House and associated heritage-listed buildings under the Silverwater Prison Complex Conservation Area (database number 5045306) which includes the Administrative Block, Newington Chapel and the former Superintendent’s House[xi]. Newington House was built by the Blaxlands around 1832 and on 16 July 1863 was where Newington College was founded by Reverend John Manson (1807-1864) as ‘Wesleyan Collegiate Institution’. In July 1880, the school was renamed as ‘Newington College’ and moved to Stanmore[xii].

Where the current Silverwater Road (A6) now travels, was the former Sutherland Street. On the southern side of Parramatta River once was the Silverwater Baths which was opened on 16 March 1929. It was a popular recreational and swimming site until 1935 it was found to be polluted and shark infested due to the waste that was being produced by the local tannery. On 2 January 1930, a shark was caught and later publicly exhibited. See below for some of the new articles of the day: 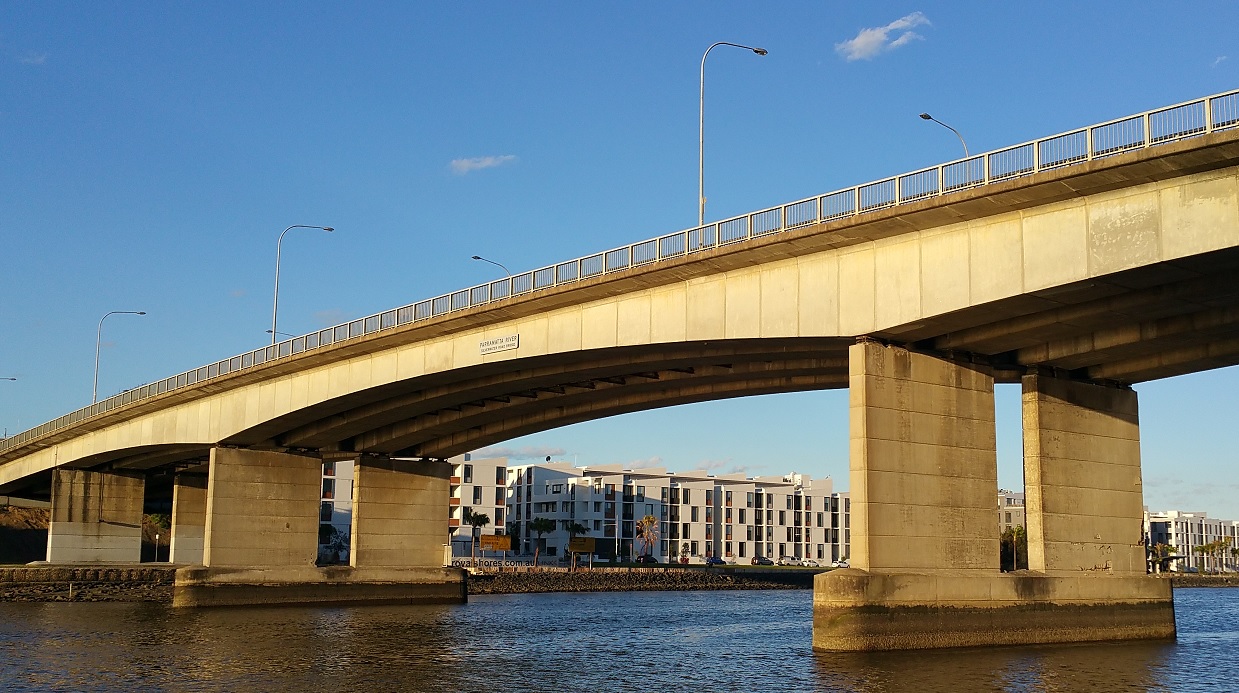 Silverwater Bridge from the southern side looking towards Ermington. Photo taken by Anne Tsang, October 2016

Opened on 10 November 1962 by the then Premier of New South Wales, Hon. R. J. Heffron, M.L.A. The Silverwater Bridge spans the Parramatta River and carries Silverwater Road (A6) over the river to link Silverwater in the south to Rydalmere and Ermington in the north. It was the first five span prestressed concrete box girder bridge in New South Wales. It was built from a series of precast concrete boxes supported on temporary steel trusses between the piers[xiii]. It cost £1,300,000, the equivalent of $35 million today and was paid for by Department of Main Roads. The clay material was obtained from the local Wilson Park.[xiv]

Located at 122 Adderley Street West, Silverwater. This fire station is just outside the new City of Parramatta boundary. Erected in 1966[xv], it started operations on Friday 27 May 1966 at 0700 hours. In 2008, renovations and extensions occurred[xvi].