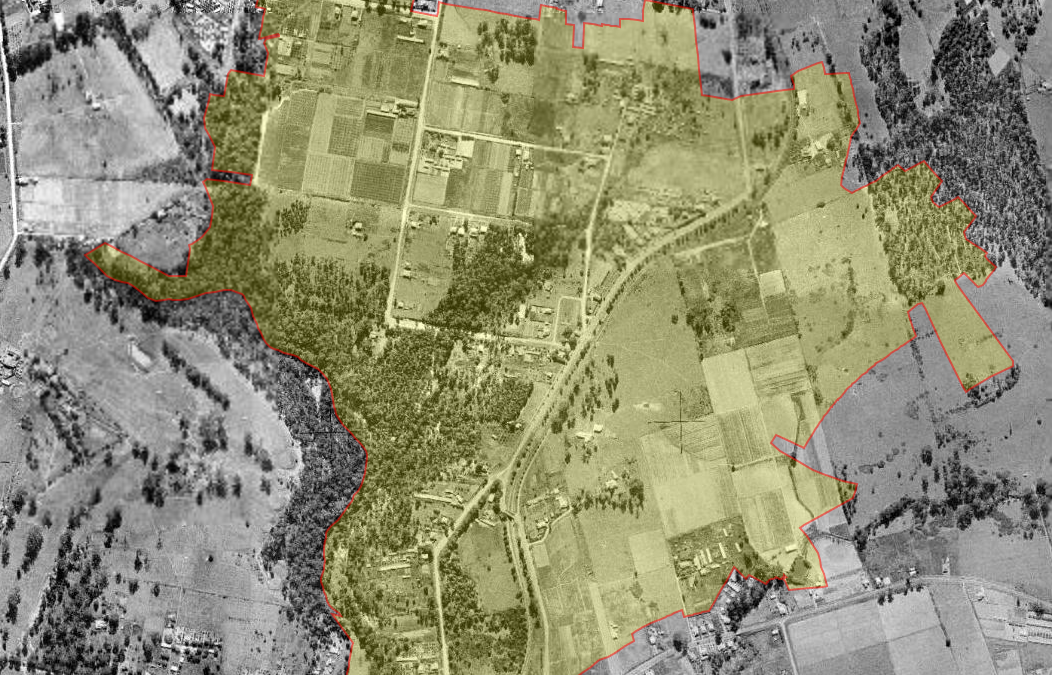 The suburb of Telopea is located between Pennant Hills Road and Adderton Road, spilling over the ridge into the west of Dundas Valley. To its south is the suburb of Oatlands.[1]

The suburb’s name derives from the New South Wales Telopea speciosissima plant (Waratah), which was once abundant in the area.[2]

The traditional custodians of the land are the Wallamettagul clan, though the area borders closely land of the Burramattagal clan of the Darug Nation.[3] 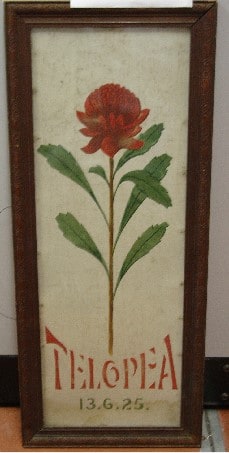 In 1838, an area of 100 acres was granted to Robert Green, who established the extensive Rock Farm. After Green’s death in 1887, most of the farmland was auctioned off as large ‘villa’ sites of five to nine acres.[5]

There was considerable excitement in this otherwise quietly pastoral community when, in 1900, a ‘mini tornado’ tore through the district, causing extensive damage to the local dairyman’s house and “carrying away the roof and completely wrecking the front of the house and one of the back chimneys”.[6] 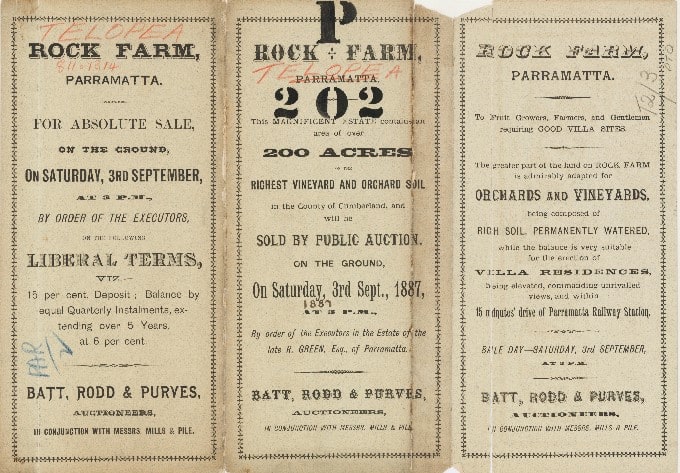 The ‘Rock Farm’ district saw further subdivision, into smaller lots, during the early-1900s, and residents were connected to the Sydney train network in 1925 when Telopea Railway Station opened.[7] However, the district remained semi-rural, predominantly featuring orchards and dairy farms, until the 1950s.

Social infrastructure to support the growing population following shortly after, with the construction of a small shopping centre in the late 1950s. Dundas Branch Library opened in 1960 and, reflecting the changing demographics of the district, a site formerly belonging to flower and seed merchants, Yates Company, was gazetted for the construction of Telopea Public School.[9] Proud of their historic connections, the primary school still features the Telopea speciosissima flower imagery on their crest.[10] 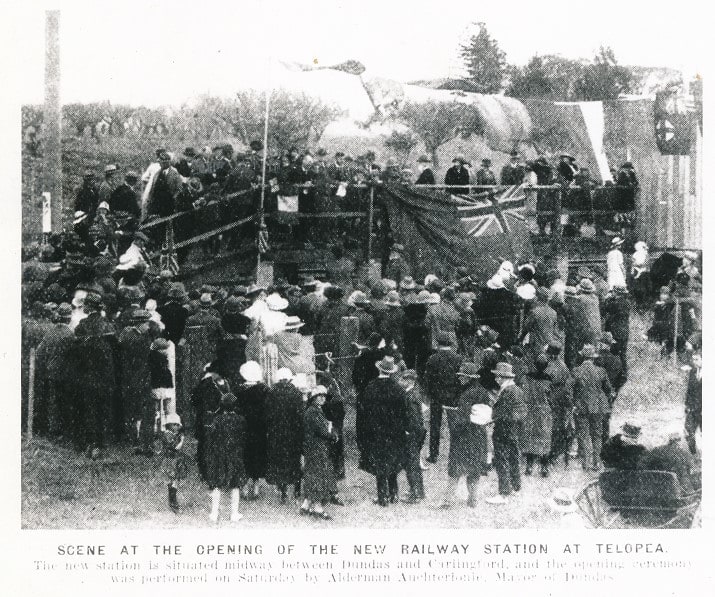 Herbert Rumsey (1866-1956) was the founder of an agricultural nursery and seed firm that once flourished in Dundas, who ran a well known store near Telopea Railway Station.

Born in Leamington, Warwickshire, England, Rumsey migrated to New South Wales with his parents in 1872.

He is also remembered as the founding president of the Society of Australian Genealogists in 1932, genealogy being his passionate hobby.

Rumsey was responsible for suggesting the street names used in the post-war development of the suburbs of Dundas, Telopea and Rydalmere. He married Mary Jane Rippon of Bowral and the names Rumsey, Leamington and Rippon Streets recall his name and nurseries in the district, as does the Rumsey Rose Garden in Parramatta Park.[11]

A number of properties of architectural significance are found in Telopea.

State Heritage-listed “Redstone” (also known as the “Winter House”) at 34 Adderton Road, is an outstandingly intact example of the small-scale domestic work of the reknowned architect Walter Burley Griffin.[12]

There are also two registered significant Aboriginal cultural heritage sites in the Telopea area, one in Sturt Park and the other in the Rapanea Community Forest.[15]

Telopea contains a large tract of bushland on its western edge, the Vineyard Creek Reserve, which contains a spring-fed creek and has several waterfalls on its course before it disappears beneath Kissing Point Road to the south. The creek and the bushland are protected environmental areas.[16]

Over a little more than a century, Telopea has grown from a rural idyll of orchards and farms to a densely developed residential suburb.

The City of Parramatta 2018 Community Profile for Telopea estimates the residential population to be 5,907. The 2016 Census illustrates the suburb’s multicultural population, with about half its residents born overseas, most notably from China and South Korea.[17]

Telopea is at the forefront of the revitalisation process taking place across the Parramatta Local Government Area, seeing significant upgrading of parks and playgrounds, and the introduction of medium and high density living.

Looking further to the future, one of the most significant projects coming to the area will be the extension of the Parramatta Light Rail.

If you’d like to know more about the suburb of Telopea, or the history of the City of Parramatta Local Government area, please send us an enquiry. 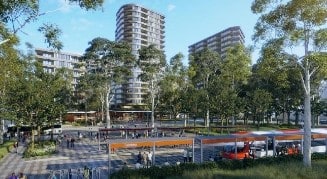 [2] Telopea. Dictionary of Sydney. Retrieved on 4/10/2019 from https://dictionaryofsydney.org/place/telopea

[7] Telopea Station. Retrieved on 4/10/2019 from https://www.nswrail.net/locations/show.php?name=NSW:Telopea

[14] Woodlands. Retrieved on 4/10/2019 from https://www.environment.nsw.gov.au/heritageapp/ViewHeritageItemDetails.aspx?ID=2245121