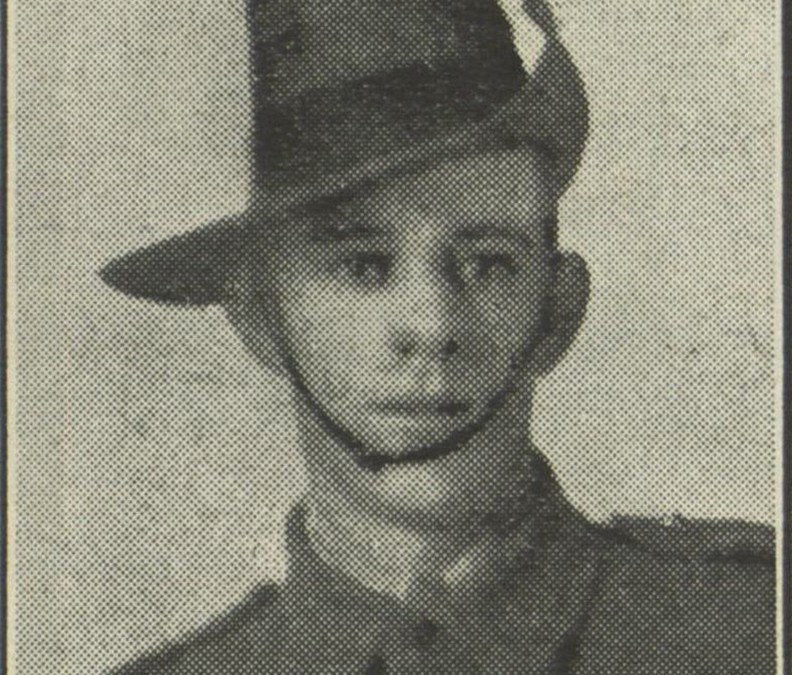 During November 1915 in Liverpool, New South Wales, Eugene Roland Norris, as one of the famous Coo-ees who marched through Parramatta enlisted in the Australian Army (service number 4566). It wasn’t until a year later on 22 March 1916, that he left his family, including his father bandmaster William Norris of Albert Road, Guildford, on board the HMAT Ballarat A70 from Sydney as part of as part of the 13th Australian Infantry Battalion, 14th Reinforcements to join his comrades in Egypt. He subsequently joined the 54th Battalion at Ferry Post and then the 14th Training Battalion. Taken on strength, he joined the 57th Battalion on 12 May 1916. On 10 December 1916, he re-joined the 13th Australian Infantry Battalion and fought gallantly for 16 months in the firing until he was wounded in action in France on 27 October 1917. Suffering from gunshot wounds to his left thigh and affected by gas, he was admitted to Suffolk military hospital on 6 November 1917. On 22 February 1919, he was discharged from the army as a Private of the 57th Battalion due to his injuries and influenza while in London, England and returned to Australia per “Kamala”.

Post war, he married Ruby May Lange in Granville in 1925 and the couple settled in Guildford. Sadly, in late 1929, their beloved son Eugene William Norris died and was buried in the Methodist Cemetery in Rookwood.

On 26 September 1934, as a 40 year old, he was mentioned in The Sydney Morning Herald (27 September 1934, p. 10) as having met with a tragic accident, falling off a 14-foot ladder in Parramatta while working on a telegraph pole. He suffered from facial abrasions and internal injuries and was rushed to the Parramatta District Hospital. On Saturday 24 October 1936, Eugene then 42, and his brother Edward, 46, were both injured in a motorcycle accident when the motorcycle tyre the brothers were side car unit passengers in blew out a tyre and turned over in Woodville Road, Granville. Both were take to Parramatta District Hospital for treatment.

On 27 December 1961, Eugene Roland Norris passed away, aged 67 and is buried at Coffs Harbour Historic Cemetery in the Anglican section. He was survived by his wife Ruby and daughters June and Betty.

Of "the boys." [News has been received that Private Roland Norris] (1917, November 17). The Cumberland Argus and Fruitgrowers Advocate, p. 11. Retrieved from http://nla.gov.au/nla.news-article86087988