Within the hub of Parramatta City, on the site of the Royal New South Wales Lancer (RNSWL) Barracks, is situated an alluring heritage building, Linden House, home to an extraordinary collection of RNSWL memorabilia. The cultural treasures, belonging to the 1st/15th RNSWL Memorial Museum, tell the remarkable story of the RNSWL from its establishment, through various wars and battles, to the present day. 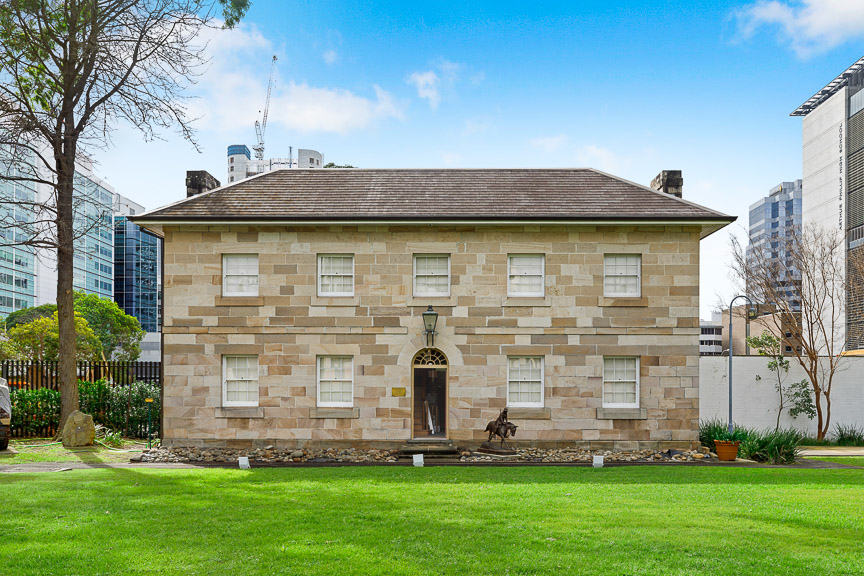 With the approach of the 75th Anniversary of Victory in the Pacific Day (VP Day), members of City of Parramatta Council, including Lord Mayor Bob Dwyer, were invited for an exclusive visit to the Museum to learn about the Lancers’ contribution to the WWII campaign at Balikpapan. The Museum was established in 1958, with a vision to collect, preserve and display regimental relics, records and artefacts from origins to present. Our visit was hosted by Lancer Association and Museum President, Len Koles and Vice-President, Ian Hawthorn, who provided their expansive wealth of knowledge about some of the artefacts. As the new Cultural Collections Officer for the Parramatta Heritage and Visitor Information Centre, I delight in discovering more about this dynamic city through my research and I was particularly captivated by the richness and significance of the Lancers collection. Not only is this collection significant to the story of Parramatta but it is also an asset on a national level.

The RNSWL is Australia's oldest surviving Regiment and most decorated unit. It has seen many transformations since its establishment in 1885 as the Sydney Light Horse Volunteers, as it became equipped with machine guns, army tanks and other armaments over time.[1] The regiment evolved into the 1st/15th Royal NSW Lancers when the 1st Royal New South Wales Lancers and the 15th Northern River Lancers amalgamated. It was actively involved in major battles including the Boer War, First World War and Second World War and now operates as a light reconnaissance regiment of the Army Reserve.

As we commemorate VP Day, I would like to divulge some of the Regiment’s achievements through sharing my highlights from the souvenirs and memorabilia of the WWII collection.

Among an extensive assemblage are original battle maps, war diaries, photographs, intelligence documents covering the two major battles conducted by the Regiment at Sattelberg, New Guinea in 1943 and Balikpapan, Borneo in 1945, a copy of the original orders for the landings at Balikpapan, written recollections of the action by Lancers who took part in it and copies and photos of the Japanese surrender at Balikpapan and of the Japanese Second Army at Moratai. The Operation Order for Oboe 2 is especially significant: Oboe 2 was part of the Operation Oboe campaign to liberate Japanese-held British and Dutch Borneo and the concluding phase of the Battle of Balikpapan, when the last major amphibious assault took place.[2]

Another treasured artefact is the 2nd/2nd Machine Gun Battalion AIF Flag. During WWII, about 100 members of the Regiment, headed by Lieutenant-Colonel D. A. Whitehead, M.C. joined the AIF, forming the 2nd/2nd Machine Gun Battalion AIF. The flag was issued to the Battalion when it joined the Australian 9th Division, famously known as the Rats of Tobruk, in Syria. It features the iconic ‘T’ of the Tobruk emblem in the Battalion colours of yellow and black. The flag was flown at the Battalion H. Q. during the battle of El Alamein, in actions at Lae, Finschafen, Sattelburg, Sio and at Tarakan and Labuan, as part of the Oboe operations in 1945.[3]

The unique collection of weaponary, uniforms and banners include an Australian Vickers .303 Medium Machine Gun used by the 2nd/2nd Machine Gun Battalion AIF in WWII and by the Australian Military until the 1950s, a Service Dress jacket OR pattern displaying the colours of the Battalion and a Swastika building drape that was captured by the Battalion when it was in the Middle East at Mersa Merath.[4] A Bren Light Machine Gun features as an example of small arms.

The Bren Gun Carrier, on show on the Barracks grounds, is highly significant to the overarching story of the Lancers: it demonstrates the first armoured fighting vehicle ever used by the Regiment and the first tracked vehicle in which recurits into Australia’s newly formed armoured units would train.[5] Between WWI and WWII, the Lancers were a militia unit [1st Machine Gun Regiment (RNSWL)]. In 1942 it converted to a tank Regiment, initially equipped with Bren Gun Carriers, and was designated an Australian Imperial Force (AIF) Regiment [1st Army Tank Battalion AIF and later, the 1st Australian Armoured Regiment (AIF) (RNSWL)]. [6] This was the only way the Lancers would be eligible for overseas service, as prior to this, militia units could not be deployed overseas. They formed the only Militia Armoured Regiment to be designated AIF and fight outside of Australia.[7]

The Regiment was to be equipped with British Matilda Infantry Support Tanks but while awaiting arrival of the tanks, early recruits would train on Bren Gun Carriers to familiarise themselves with tracked vehicles. This was necessary because, at the outbreak of war, the Australian Army possessed only 12 Vickers tanks, four of which were so old, bits fell off when they moved. The Matildas, obsolete in the European theatre of war, had to be shipped from England. On arrival they were considered useless for the type of war Australia was to fight, without any water crossing capability and too heavy for use in jungles. Undaunted, the newly formed Australian Armoured Corps Centre developed the Matilda’s waterproofing and the Lancers proved the Matilda to be the finest jungle fighting tank at Sattelberg, New Guinea in 1943.[8] They were also used to support the 7th Division in the battle at Balikpapan in Borneo. It was on 1 July 1945 that the Regiment staged the largest armoured amphibious assault undertaken by the Australian Army. To this day, it remains the largest ever armoured assault.[9]

There is also a rare collection of silk escape maps and miniature compasses which were issued to Allied aircrew operating over Japan and other Pacific territories. These items formed escape and evasion kits and assisted the aircrew to retreat to Allied territory if they were shot down.[10] The escape compasses were usually cleverly disguised as everyday objects and hidden in uniforms (e.g. as buttons) for discretion. The Museum has several rotor compasses, characteristically sealed in a rubber pad which protected them against humidity in the tropics and enabled safe swallowing if the serviceman was captured.[11]

The Museum has recently acquired a souvenir of intrigue: a Japanese ‘Good Luck’ flag, or yosegaki hinomaru. Made of silk, it displays the characteristic red sun’s circle over white background and good luck message in the Japanese language. It was tradition that flags were signed by family and friends and gifted to deployed Japanese soldiers as a token of good luck and fortune in war.[12] However, what is most unusual about this particular flag, is that rather than containing traditional lucky messages, it is filled with the names of the soldiers’ Regimental comrades (identified by a local Japanese-born teacher who translated the text) and covered in blood. This alludes to the sinister belief that the flag may have belonged to an Officer who was personally embarking on, or leading his men on, a suicide mission.

The Museum’s collection has the powerful ability to connect with visitors in curious ways, whether by fate or sheer coincidence. One example of this is through the Shinto Ancestral Shrine and memorabilia of a Japanese soldier named Iwo Nikano, which includes a cotton Good Luck flag, Belt of a Thousand Stitches, small wooden tablets with prayers from the soldier’s local Shinto shrine in Japan, a wooden Japanese ‘chop’ (personal signature stamp) and the soldier’s address books. Recently, a Japanese student visited the Museum and translated most of the material. She confirmed that the collection belonged to the same soldier from an Osaka Regiment stationed at Balikpapan and that to her amazement, a soldier from that Regiment listed in the address book actually lived across the street from her current residence in Japan![13]

Another example relates to the showstopper of the collection, a Matilda Tank named ACE. ACE served with 1 Troop A Squadron, 1st Australian Armoured Regiment (AIF) (RNSWL). It was the first tank off the landing craft when the Regiment launched its colossal assault at Borneo, Balikpapan in July 1945. At the end of the war, all the Matilda tanks were dumped at sea except for three which were in the mechanic’s workshops and brought back to Australia. It was believed that ACE was one of the destroyed tanks, until 1997 when Volunteers of the RNSWL Memorial Museum heard of a tank left abandoned in a paddock near Moss Vale. Filled with enthusiasm, they located the tank and discovered that beneath the dank water and vegetation, it was indeed ACE. In their excitement, they burst into a meeting of the Lancers Association at Lancer Barracks, chaired by a Regimental WW2 veteran named Les Betts and proclaimed what they had found. To Betts’ utter astonishment, this was the very tank he had driven in Balikpapan, 1945![14]

ACE Matilda was surely destined to return home to Parramatta. Recognising its significance, the volunteers set out to restore it to full mobility - the condition in which the ACE crew would have fought in it. The operation took six years, $100,000 and 60,000 volunteer hours and was awarded a coveted National Trust conservation award.[15]

The achievements of the restoration crew in bringing this tank back to life is truly remarkable. ACE is the only one of the three surviving Matildas in the world from the Balikpapan campaign to have been, or ever will be, restored to its WWII condition. It is also the only British or Commonwealth armoured fighting vehicle which saw action in any theatre of the war, to have been fully restored and returned to its WWII fighting unit. To top it off, restoration was even undertaken by retired members of that fighting unit - the Royal NSW Lancers.[16]

Ace is on display at the Lancer Barracks and makes appearances at military and community events. Also on display in the Museum is a collection of personal items found inside the tank which belonged to the ACE crew.

The outstanding contribution of the RNSWL to Australia cannot be overstated. I hope you have been inspired to visit the 1st/15th RNSWL Memorial Museum and experience the impact of this collection for yourself. The astonishing tale of the Lancer’s experience in WWII and its memorabilia will move you as it did me and my colleagues at City of Parramatta.

(Special thanks to Ian Hawthorn for providing detailed insight into the Lancers’ history.)