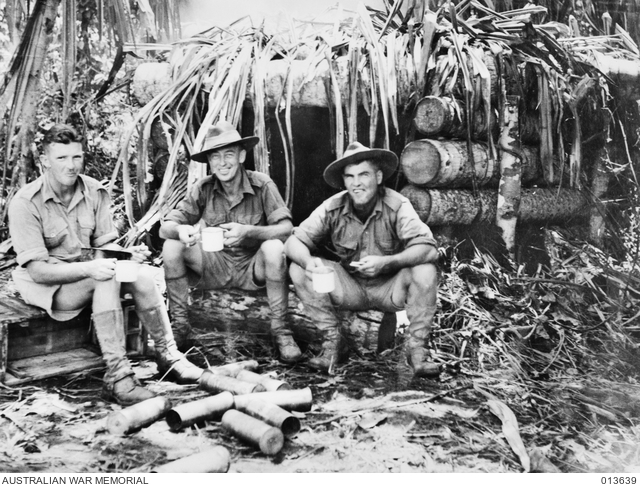 Kokoda Trail, New Guinea (G.Silk, 1942) This log structure was built by the Japanese as protection for a mountain gun, this position was captured at bayonet point.

Prime Minister Robert Gordon Menzies announced the beginning of Australia's involvement in the Second World War on the 3 September 1939. The announcement aired on every national and commercial radio station in Australia.

Over the course of almost six years, Australian men and women served and fought on many fronts. This included; Europe, the Mediterranean and North Africa, against the German and Italian armies. Closer to home the Australian army fought the Japanese in Southeast Asia and the Pacific.

The Australian army was not involved in combat until 1941, with the arrival of the 6th, 7th and 9th Divisions joining the Allies in the Mediterranean and North Africa. During 1940 the Royal Australian Navy and Air Force had joined in operations against Italy and was part of the Battle of Britain.

The Australian Army were in the Mediterranean theatre of war from 1941 to the end of 1942. During 1941, they saw success against the Italian military and defeat against the Germans in Greece, North Africa and Crete. As well as success during the Syrian Campaign, which involved operations in both Lebanon and Syria against the French Pro- Nazi, Vichy Government.

One of the first major battles Australian forces were involved in was the Siege of Tobruk. The Australian soldiers were given the name, the Rats of Tobruk, for their excellent network of belowground defensive positions. These 14,000 Australians with the Allied forces held the garrison against German forces for over six months. And the port of Tobruk was still held by the Allies in 1942, before it was surrendered. From here, the Australian 6th and 7th divisions moved to fight against Japan in the Pacific.

Australia’s 9th Division were involved and played a prominent role in the Battles of El Alamein.  The Allied success in these battles were extremely significant in the struggle for the North African front. Under the leadership of Lieutenant General Leslie Morshead, the Australian forces diverted the German Field Marshall Rommell’s attention to the north in El Alamein, Egypt. This small location opened the way to Cairo and the Suez Canal, a strategic position of immense importance. From July to November 1942, the Australians fought an immensely difficult battle and suffered over 6000 casualties. Nevertheless, their actions meant the Allies were in a strong enough position to force Rommell to withdraw or face complete defeat. The remaining soldiers then made their way to the Pacific.

By the end of 1942, the only Australians remaining in the Mediterranean were airmen serving either with 3 Squadron, Royal Australian Air Force (RAAF) or in the Royal Air Force (RAF).

Japan became part of the Axis powers in 1942, from there they managed a string of successes and occupied much of south-east Asia and the Pacific region. Australia suffered a terrible defeat in Singapore in February 1942, followed by the bombing of Darwin. This threat lead to the return of all Royal Australian Navy (RAN) ships to the Pacific as well as the 6th and 7th Divisions of the army.  It was at this time that the Australian government was given special powers to support a total war effort at home and abroad.

Australia fought Japan on many fronts, including, Netherlands East Indies, Coral Sea, at Midway, on Imita Ridge and the Kokoda Trail, and at Milne Bay and Buna.

The Kokoda Campaign is considered the most significant fought by the Australians during the Second World War. On July 1942 Japan started full scale offensive to capture Port Moreby. The Japanese saw the port as a way to attack the Australian mainland.

The Kokoda Trail was a path that linked Ower's Corner, approximately 40 km north-east of Port Moresby, and the small village of Wairopi, on the northern side of the Owen Stanley mountain range. In terrible conditions, Australians fought a series of battles over the next four months. Supplies were scarce, and tropical diseases such as malaria affected the men’s ability to fight. In fact, loss of life due to disease would end up being more than 4000. The tracks path cut over mountains and through around almost 100 kilometres of dense jungle. All supplies had to be carried as much of the track could only be travelled on foot.

The Kokoda Trail fighting was some of the most violent and cruel encountered by Australian troops in the Second World War. Victory on the Kokoda Trail ensured that Allied bases in northern Australia were not be seriously threatened by air attack. By January 1943, 625 Australians were killed along the Kokoda Trail and over 1,600 were wounded.

During 1943 the Australia’s main battle front was against the Japanese. These conflicts took place at Wau, the Huon Peninsula and the clearing out of Japanese forces from Borneo to Bougainville. The campaign against the Japanese at the Huon Peninsula was a complex operation and ran until 1944. And for the Australian forces it was their largest campaign of the war. The campaign started with the amphibious landing at Scarlet Bay, by the Americans and the 9th Division of the Australian army. These were the soldiers who had fought at Tabruk. Over the next four months, the Japanese were pushed back north from Loe to Sia on the coast of New Guinea. The Allied forces used the technological advantages they had at sea and in the air to achieve the victories in the Huon.

The extensive campaign against the Japanese fought from Borneo to Bougainville took place from 1944 until after the war was officially over in August 1945.

The Bougainville campaign was a series of land and naval battles in the Pacific campaign between Allied forces and Japan. The campaign took place in the Northern Solomons. Australians were heavily involved from November 1944 until August the next year. The last phase of the campaign saw 516 Australians killed and another 1,572 wounded, with 8,500 Japanese killed.  Disease and malnutrition killed another 9,800 and some 23,500 troops and labourers surrendered at the end of the war.

The Borneo campaign of 1945 was the last major Allied campaign in the South West Pacific Area, and the last for the Australian forces. A number of amphibious assaults, were carried out by the Australians between 1 May and 21 July. The Australian ground forces were supported by the US with the US also providing the bulk of the shipping and logistic support necessary to conduct the operation.  The Australians landed at Tarakan, Labuan, North Borneo and Balikpapan. Guerrilla operations were also used  by  the Dayak tribesmen of the region and small numbers of Allied personnel inside the island. While major combat operations were concluded by mid-July, mopping-up operations continued throughout Borneo until the end of the war in August. Casualties during the campaign on the Allied side were around 2,100 while the Japanese suffered about 4,700 casualties. The Borneo Campaign continues to divide experts as it its effectiveness and necessity. And of particular controversy was its length, as the Australian soldiers were still fighting when the war was officially over.

While most of Australia’s armed forces were in the Pacific from 1942, there were still may in the air force who stayed in Europe and helped the Allies there. Australian airmen flew in North Africa and the Middle East, assisting in the defence of Malta and over Italy in 1945 to 1945. As well as with the British over the land and sea of Europe for the duration of the entire war. Australian aircrews flew in almost every major air operation and the lives lost, 3486, was close to 20 per cent of all of Australian deaths.

Australians suffered greatly at the hands of the Japanese, as prisoners of war. More than 22,000 military men were captured as well as close to 40 nurses, plus Australian civilians. This occurred during 1942 in the Pacific theatre of war, in Malaya, Singapore, New Britain and the Netherlands East Indies.

Due to the Japanese treatment of these prisoners, approximately 8000 had died by 1945. This included the Bangka Island massacre of 22 Australian Army nurses and 60 Australian and British soldiers and crewmembers who had survived the sinking of Vyner Brooke by Japanese bombers. Most of the Australian prisoners of war died of neglect, illness and starvation.