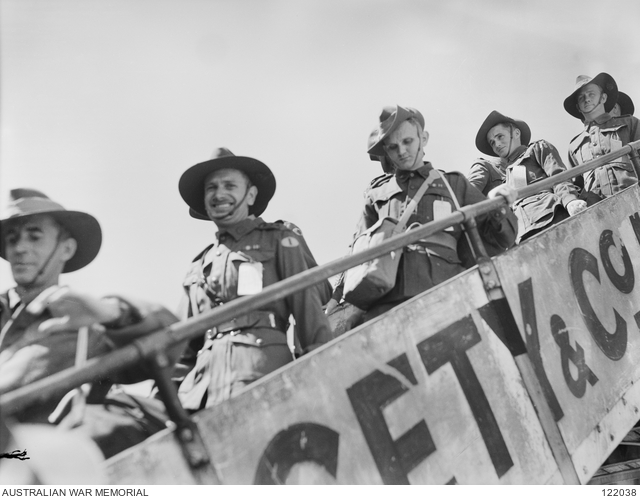 Sydney, NSW 1945. Members of the 8th Division AIF on the gangway of the Hospital Ship Oranje which brought them from Singapore where they had been prisoners-of-war since 1942.

Nearly every country and territory in the world participated in World War Two. Most were neutral at the beginning, but only a few nations remained neutral to the end. The Second World War pitted two alliances against each other, the Axis powers and the Allied powers; the U.S having served 16 million men, Germany serving 13 million, the Soviet Union serving 35 million and Japan serving 6 million. With millions serving in other countries, an estimated 300 million soldiers saw combat. A total of 72 million people died with the lowest estimate being 40 million dead and the highest estimate being 120 million dead

The statistics on World War Two casualties are inexact. Only for the United States and the British Commonwealth can official figures showing killed, wounded, prisoners or missing for the armed forces be cited with any degree of assurance. For most other nations, only estimates of varying reliability exist. Statistical accounting broke down in both Allied and Axis nations when whole armies were surrendered or dispersed. Guerrilla warfare, changes in international boundaries, and mass shifts in population vastly complicated postwar efforts to arrive at accurate figures even for the total dead from all causes.

*Worldwide casualty estimates vary widely in several sources. The number of civilian deaths in China alone might well be more than 50,000,000.