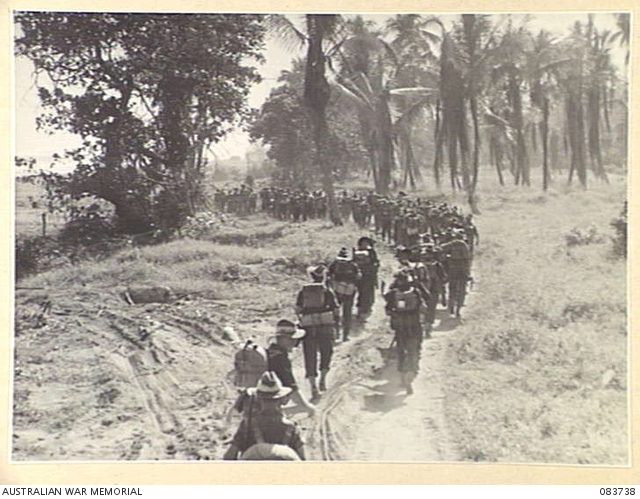 Private Kevin Maurice, also known as Morris, Spurway was born in Parramatta on the 17 December 1919. He was living on Webb Street Parramatta and working with his four brothers at their father’s Parramatta nursery F.E. Spurway and Sons, which grew citrus and roses, when he enlisted in the Australian Army on the 29 April 1940. His service number was NX13589. [1]

Kevin remained in the Australian Army for 5 years, eventually being discharged on the 16 October 1945. In that period his military career included being a transport driver, stretcher bearer, a gunner and a rifleman. [2] Whilst participating in internal security and coastal defence in Darwin in Australia’s Northern Territory he experienced the heavy Japanese air raids that occurred on mainland Australia in 1942 and 1943. During one air raid Kevin was trapped in a flat-bottomed assault barge whilst the Japanese bombed defence installations. [3]

Kevin also served overseas in New Guinea, as did three of his brothers who also joined the Australian Army. He served with the 2/4 Australian Infantry Battalion which landed at Aitape, New Guinea, on 2 November 1944 to undertake its only campaign against the Japanese. The 2/4 Australian Infantry Battalion maintained its presence in the Aitape-Wewak region until the Japanese surrender and fighting ceased in August 1945. The unit then began to be demobilised, and by November 1945 was fully disbanded. [4]

After the war Kevin continued to live at Webb Street Parramatta, and worked in his father’s nursery and as a labourer. [5] He also resumed playing golf with the Oatlands Golf Club at Bettington Road Oatlands. [6] He died on the 31 January 1968 and was buried at All Saints Cemetery, 56 Fennell Street Parramatta aged 49 years.