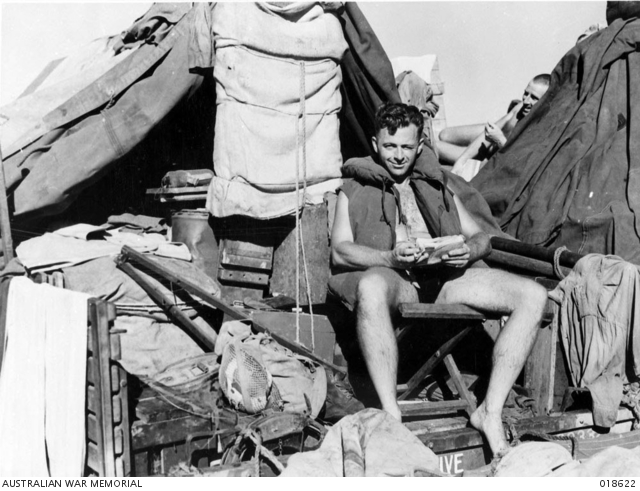 Private Thomas Costello was born on the 2 May 1917, and enlisted in the Australian Army on the 30 June 1941. The locality registered on his enlistment was Parramatta and his service number was NX37555. [1]

Thomas can be seen in this photograph in his ‘doover’ on board a Landing Ship, Tank (LST) on the way to Labuan Island, Brunei Bay, Borneo in 1945. [2] LST’s also known as tank landing ships were designed by the Allies during World War Two to support amphibious operations by carrying tanks, cargo and troops onto shores with no docks or piers. [3] A ‘doover’ is Australian military slang for just about anything. [4] Thomas is at sea on his way to Labuan Island, Brunei Bay, Borneo. In the final months of World War Two, Australian forces liberated Borneo from Japanese occupation in the only joint campaign of the war. The Royal Australian Navy (RAN), the Australian Army and the Royal Australian Air Force (RAAF) combined forces in this highly planned and significant campaign. [5]