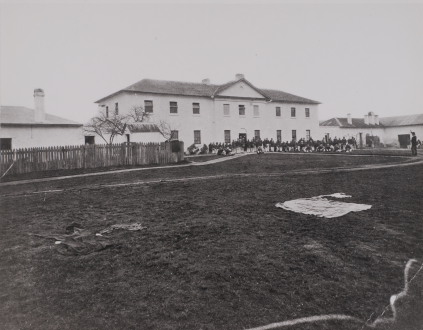 Completed in 1820 this ‘convict barracks’ was later transformed into an “Imperial Military Barracks” for the soldiers and in 1843 (when convict transportation to NSW ceased) they were repurposed yet again to became a Military Hospital. i In the 1870s, after the Military Hospital was closed it was incorporated into the Erysipelas Hospital. ii In 1877 community feeling towards this structure was clearly expressed by a man calling himself ‘a pilgrim’, in an article to The Freeman’s Journal. He begins with an arresting comment: iii

The Erysipelas Hospital from a distance is, I should say, with the sole exception of the new Government House in Melbourne, the ugliest structure in the world. On approaching near to the building its defects become even more prominent, and the squalid aspect of the whole place reminded me strongly of the ruins of a deserted granary that had been partially destroyed by the tidal wave, which I once visited when on the west coast of South America.

It appears then, that in February 1875 it was resolved by the Government to establish an institution which could be made available by the Infirmary authorities for the purpose of isolating cases of erysipelas and pyxmia: the hospital to receive patients of both sexes. Subsequently there are so few erysipelas cases, part of the buildings were turned into an asylum for the destitute, upon precisely the same pattern as the institution presided over by Mr. Dennis. Thus it will be seen that a pauper admitted by Mr King into the Macquarie-street Asylum (another name for the Erysipelas Hospital) is consequently exposed to the danger of contagion of one of the most virulent diseases that nature is heir to. There are no words too strong with which to denounce this almost criminal carelessness on the part of the official who recommended this shocking system of herding together of the indigent with those afflicted with a disease. iv

The Erysipelas Hospital was officially named the Macquarie Street Asylum in June 1884. This Asylum was primarily for old and destitute men but it continued to admit some of the worst cases of infectious disease including some of those turned away from the Sydney Infirmary.

In the broader community there were those who felt the Asylum attracted the sick, infectious, incurable and poor to Parramatta and there were repeated calls from the local community for its closure. The 1886-87 report into asylums in New South Wales uncovered many cases of neglect and outright abuse in the Macquarie Street institution. These unfortunate men were deemed ‘imbeciles’ in lieu of an understanding of dementia or limited mental capacity. Ward 3 was a focal point of this misery, containing the so-called ‘dirty cases’ – a reference to complications including paralysis, incontinence and suspected syphilis. v

But there were others who felt the building kept sickness and poverty off the streets and brought much needed income to Parramatta through Government wages and contracts. In 1887 trained nursing staff were introduced to replace the existing system which saw able-bodied inmates attend those less well off in return for a small gratuity.vi The earlier system had been possible because not all the Asylum’s inmates were sick and old. Some were  injured, homeless, or alcoholic young men who lived with the majority which consisted of old men without income or family support.

On August 1, 1901, the New South Wales Government introduced the old age and invalid pensions, and over time this helped a proportion of inhabitants become independent, breaking from a cycle of repeated admissions. By the 1890’s, the Asylum had also become a major centre for the treatment of serious eye conditions.