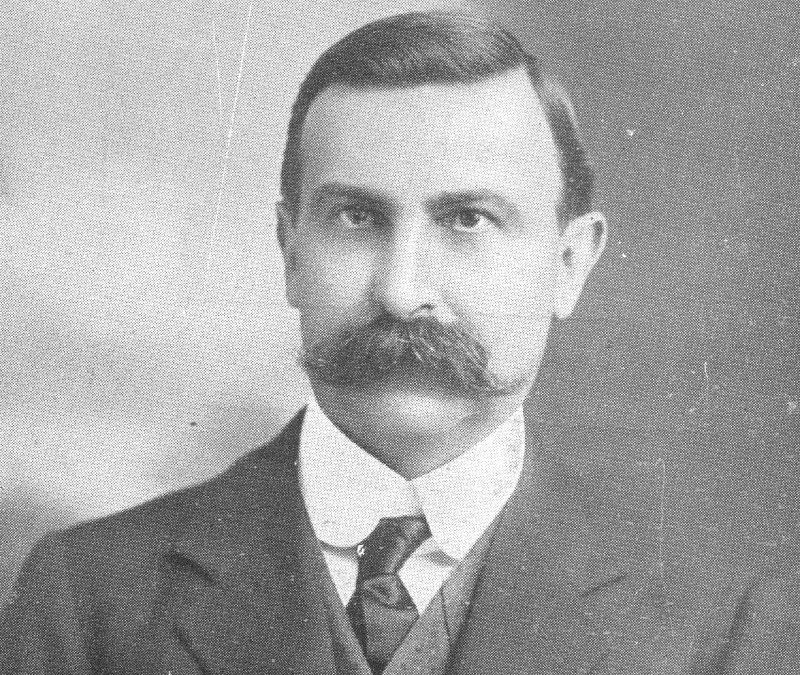 Walter Sigismund was born at Brislington on 16 March 1861. Known as Sigismund or ‘Sig’, he attended the King’s School (TKS) (1872-1880) beginning the long tradition of his sons and  grandsons in attending TKS Parramatta.[i]

Here, he left an unequalled sporting record behind him. While at school he won the All Schools 440 yards championship and in 1876, scored 114 runs in the cricket match against Southey’s School from Mittagong when TKS scored a record 560 runs.[ii]

He undertook his medical degree at Guy’s Hospital in London and graduated MRCS LSA. While a student here he won a tennis championship in a field of 300 competitors and was captain of Guy’s Hospital cricket team for three successive years. He played  in the position of three-quarter in the Blackheath Football Club, the then leading Rugby Union Club  in London. He played alongside the famous England footballer and cricketer of the day, AE Stoddart.[iii]

On his return to Parramatta in 1888, Sigismund played  lawn tennis (Brislington once had its own tennis court), golf, and followed his father’s love for lawn bowls. His father had been the first president of the Woolpack (Inn) Bowling Club, the private club that developed into The Rosehill Bowling Club in 1880 when Nat Payten junior sold the inn in 1879. Sigismund played golf to relax but became a champion both in tennis and in bowls.[iv]  He followed Frederick Charles Cox (Parramatta’s mayor, 1884) as president of the Rosehill Bowling Club from 1904 -1919.  As president, he ‘lifted the game to high repute’.[v]

Margaret Isabella Macarthur was the first daughter (b 21 August 1863) of George Fairfowl Macarthur, headmaster of The King’s School and grand-daughter of Hannibal Hawkins Macarthur and Anna Maria King of The Vineyard.  When she was seventeen years old, she was courted by Walter Sigismund, one of  her father’s former pupils. The match appears to have blossomed during a visit to England by Isabel and her mother in 1881. Walter Sigismund, known as Sigismund or ‘Sig’, was at that time studying at Guy’s Hospital, London and preparing to join his father’s medical practice at Brislington, Parramatta.

In 1888 when the couple married, Sigismund’s  parents began a protracted holiday in England and Sigismund took over his father’s practice. They lived at Brislington, Parramatta and enlarged it during succeeding years, including adding the Federation styled front verandah and front door. They had seven children – Keith, Marg, Gordon, Ruth, Arthur, George and Isabel.

Walter Sigismund was associated with the Parramatta District Hospital for over 20 years as a doctor, a committee member and as its president in 1904. He knew the aging and inadequate Macquarie hospital of 1818 and helped to fight for the new Sulman hospital 1898, the latter building that was finally demolished in 2005.[vi]

When a public meeting was called by Mayor Grahame to form an historical society in Parramatta, amongst the foundation members in 1913 were  ‘Dr W.S. Brown, Mrs W.S. Brown, Miss Brown [and] Miss R. Brown … ’ and Sigismund was subsequently elected as a vice president.[vii]  Whereas their is no legacy of Dr Brown undertaking any papers for the Society, during 1914 the secretary Rev S. Johnstone, in the Society’s first Annual Report (22 March 1915) expressed thanks to members for preparing papers.[viii]  This included Mrs W.S. Brown who presented a paper on ‘Bungarribee’, the attractive historical Colonial Georgian house in Blacktown. This was fortuitous for it was not long before it became derelict and later demolished. [ix] In the same volume, the President William Freame wrote

The Society desires to thank Dr W.S. Brown and the several ladies and gentlemen whose generous subscriptions have enabled this Journal to be published .[x]

After a year as president, Sigismund Brown was again elected to the Society Council  as a vice president.

From manuscripts donated to the Parramatta Heritage and Visitor Centre, 2014