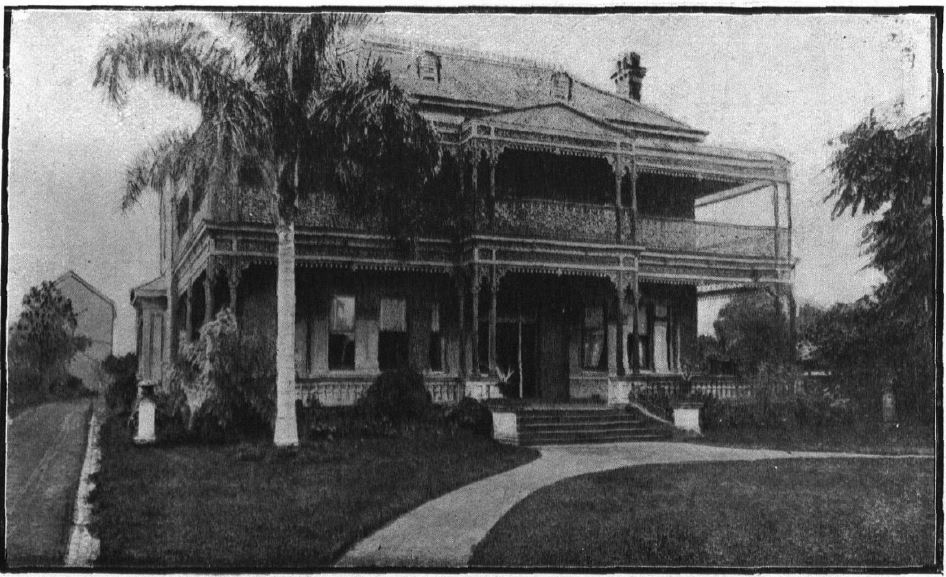 The above featured image is of “Hiawatha” house which once stood on the north side of George Street between Smith and Charles Streets in Parramatta, N.S.W. A good example of a Victorian town house, Hiawatha (also found spelt as 'Hyawatha') was a popular venue for wedding receptions, social celebrations and meetings in the mid-twentieth century. The house has long since been demolished, first in the 1960s to make way for a bowling alley, and again in late 1980s for the current iconic landmark A-grade commercial building that is known as 'The Octagon'.[2]

In 1891, Withers began his political career representing the Anderson Ward in local council and was elected Mayor of Parramatta in 1894.[5]

Alexander John Charles Christie (c1870-1933) was the next owner of Hiawatha. He was the Superintendent of the Mint and had worked there from junior clerk in 1890 until The Sydney Mint was closed in January 1927. Christies was the son of Alexander J. and Mary Ann Christie. He was born in Parramatta in 1870 and married Alice Eva McKelvey/MacKelvey in 1898 at St Patrick’s Cathedral.

During the Christie family's residency at Hiawatha, the Christie’s celebrated the birth of their children Maria (Marie) Agnes, Alice Veronica (Ronny), Stella, Joseph and John. As well as the reception of the marriages of his children from Marie marrying Dr. Terence Aubrey Daly of Macquarie-street, Parramatta, the youngest son of the late Mr. and Mrs. Edward Daly, of Concord on Wednesday 31 August 1921; Ronny marrying John I. Gorman, the eldest son of Mr. and Mrs. Edmond Gorman, of the Riverina, and "San Marino," Beaumaris, Victoria on Wednesday 16 June 1926.

It was also where his beloved wife Alice collapsed while preparing for an outing and died from a sudden heart afflection on 2 September 1932. Alexander passed away on Saturday 28 February 1933, aged 63. Devoted Roman Catholics, the Christies were buried at North Rocks Cemetery.[8]

Hiawatha remained in the Christie family while also being used as a place of entertainment for the community until its title was transferred from Joseph Christie to Ruby Florence Tolhurst (nee Rogers) in 1946.[9] Ruby Florence Tolhurst was a divorcee and the mother of Ronald Cyril Tolhurst (1916-1996) of Concord West. Ronald and Royce Victor Beavis were the registered proprietors of Hiawatha Private Hotel and Restaurant (on 23 October 1946) and Hiawatha Catering Co. Pty Limited (on 13 November 1946).[10] They remodeled Hiawatha on 'continental lines' to become a Restaurant, Cabaret, Function Centre and offer guest accommodation.[11] On 28 June 1949, Beavis became a joint tenant to the deed.[12] He was later joined by George Cecil O’Connell as co-director. O’Connell had previously served in the First World War as a Private of the 10th Australian Light Horse (service number 3440) and postwar had accumulated twenty years' experience in wedding receptions, being the owner of "Parisienne" top-line wedding receptionists in the western suburbs, before joining the Board of Directors of "Hiawatha" taking over that phase of "Hiawatha's" activities.[13]

Under the management of O’Connell, he brought many new innovations to Parramatta including a new cocktail bar adjoining the fruit juice bar and soda fountain which opened off to the ballroom and main banquet room in 1948 as shown below in The Cumberland and Fruitgrowers Advocate newspaper.[14]

O’Connell passed away suddenly on 5 July 1952 at Hiawatha, where he had resided with his wife Mary and daughter Thelma.[15]

Hiawatha was later demolished in order to build an American-style tenpin bowling centre in Parramatta. The Parramatta Indoor Bowl Centre was also known as the Ten Pin Bowling Centre which may have been built based on the designs of architects Fisher and Jackson.[18] 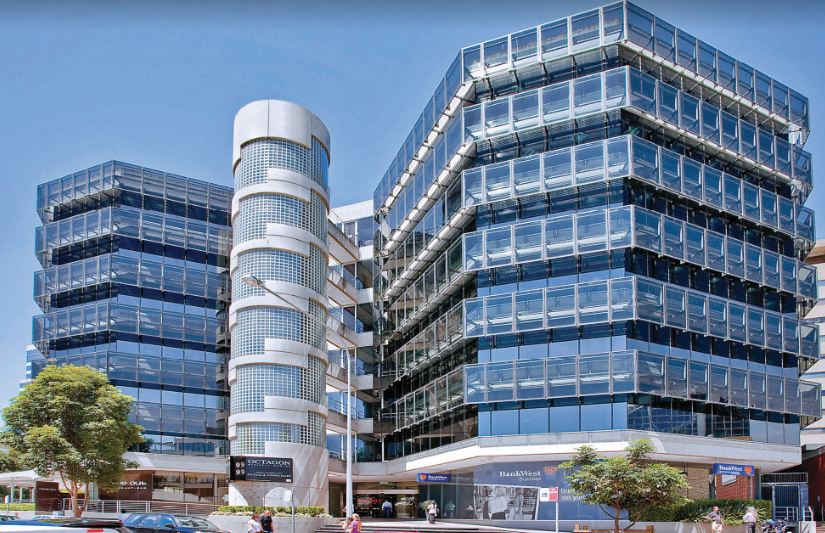 The near 22,000 square metre land for the A-grade commercial building known as 'The Octagon' at 110 George Street, Parramatta was consolidated between 1978 to 1984 at a cost of $1 million, including the site of the Bowling Centre, former Hiawatha site. It was designed by lead architect John Andrews and developed by W. McNamara Group and C. Itoh for Permewan Wright Consolidated (owned by JGL Investments). Building commenced in 1986 and was completed in late 1989 at $60 million dollars. The Octogon is an unique building featuring eight octagonal pods with 20,000 square metres of office space on 6 levels, and 2,000 square metres of ground floor commercial retail space enveloping the central courtyard. In 2012, the building was extensively refurbished.[20]