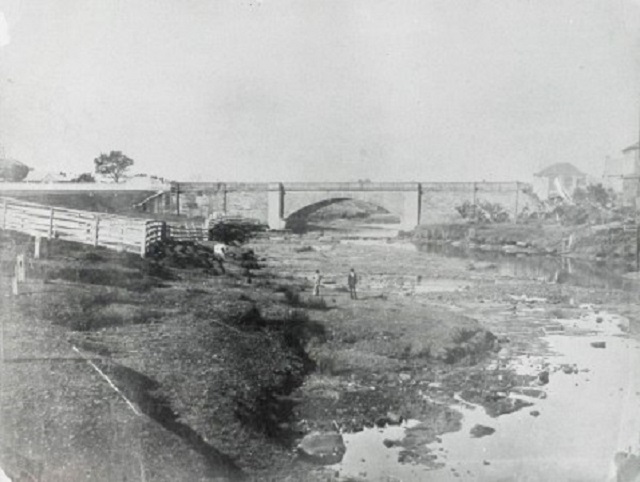 By 1889 there were many concerns about public health[1] in Parramatta particularly the state of the river, near Lennox Bridge. Apparently, the rock and stones trapped all manner of putrid matter which refused to be flushed out even at low tide. At a special meeting of the Council in April 1889 they decided to clean up the riverbed, which locals felt was cause of all manner of diseases including typhoid fever. To accomplish this the Council voted to employ fifty locally unemployed men to pick up the refuse at low tide.

One of main causes for the congregation of filth around the bridge was the installation some years earlier of drains from many of large government institutions (the hospital, gaol, asylum and others) which emptied directly into the river at Lennox Bridge. Another problem was the floodgates installed in the weir further downstream which were hard to operate and ended up creating a backlog of filth.

The article in the Evening News (25 April 1889, page 5)[1] goes on to describe one attempt to drain the backlog

about 5 o’clock in the afternoon, the mass of fetid waters was drained off, a most abominable and intolerant stench arose, enough to sicken anyone crossing the Lennox Bridge. This arose form the foul deposits left by the receding waters and harboured by the loose stones and other obstructions in the bed of the river.

Locally the area was referred to as ‘Death’s Hole’.

In 1891 a plan was put forward by the Government Architect [2] to redirect the drains emptying into the Parramatta River. The solution put forward at this time was to create a series of 18 inch cast iron pipes mounted on concrete which would intercept the drains of the institutions along the river bank (the Hospital for the Insane, Reformatory for Girls, the Gaol, the Macquarie’s Street Benevolent Asylum and the Police Barracks) and redirect it below the floodgates. This they hoped would leave it up to the harbour’s tidal movements to remove the filth previously deposited in the river.

Sometime before 1900 a channel was cut into the river[3] and concrete walls put up along each side. Unfortunately, these, and the flood gates, were not only expensive they seem to have caused as many problems as they fixed. As a result, by the time the Council met to discuss the matter in 1900 the walls had already been broken up and used for making roads. A new proposal put forward at this meeting by Major Ferris was to construct a channel starting at Lennox Bridge which was four feet deep and 80 feet wide.

By September 1907 a new sewage works and system of pipes[4] was being worked on with help from the Government. These sewer lines were to follow the creeks and lines of natural drainage systems. The pumping station from which all the lines of sewage radiate was to be on the river frontage near the George Street Asylum. Here two concrete wells were to receive the sewage and pumped it through a main sewage pipe to the treatment works which were to be erected at the junction of the Parramatta River and Clay Cliff Creek. After purification, the effluent was then dumped straight into the river.

Works were still being discussed in 1941 when the Minister for Labour and Industry, the Hon. George Charles Gollan (1886 - 1957)[5] announced approval had been given to extend the concrete sides of river drain[6] on the eastern side of Lennox Bridge further towards the Gas Works Bridge and concreting the center of the works.