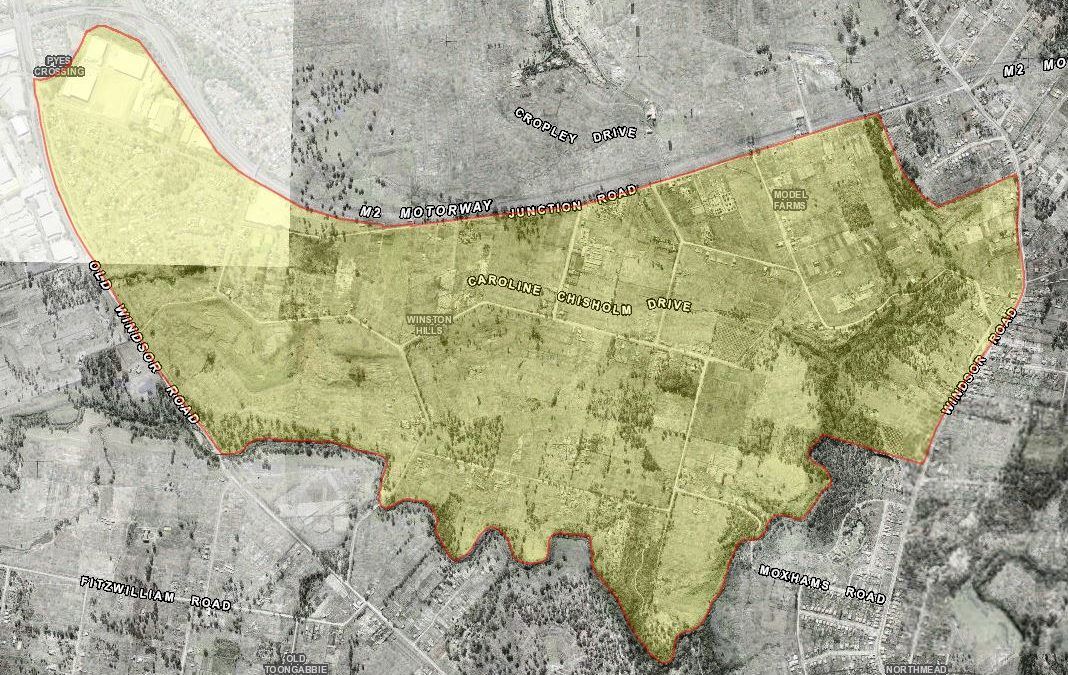 Winston Hills is a 5 square kilometre (or 457 hectare) suburb bounded by M2 Hill Motorway, Gibbon Road, Langdon Road, Caroline Chisholm Drive and Junction Road in the north, Windsor Road in the east, the suburb of North mead, The Quarry Branch and Toongabbie Creek in the south, and Old Windsor Road in the west.[1] It had previously been known as ‘Model Farms’ and included parts of Old Toongabbie when the suburb was developed in the late 1960s. At present it lies about 1 km north of Old Toongabbie and about 2 km south-west by south of Baulkham Hills. 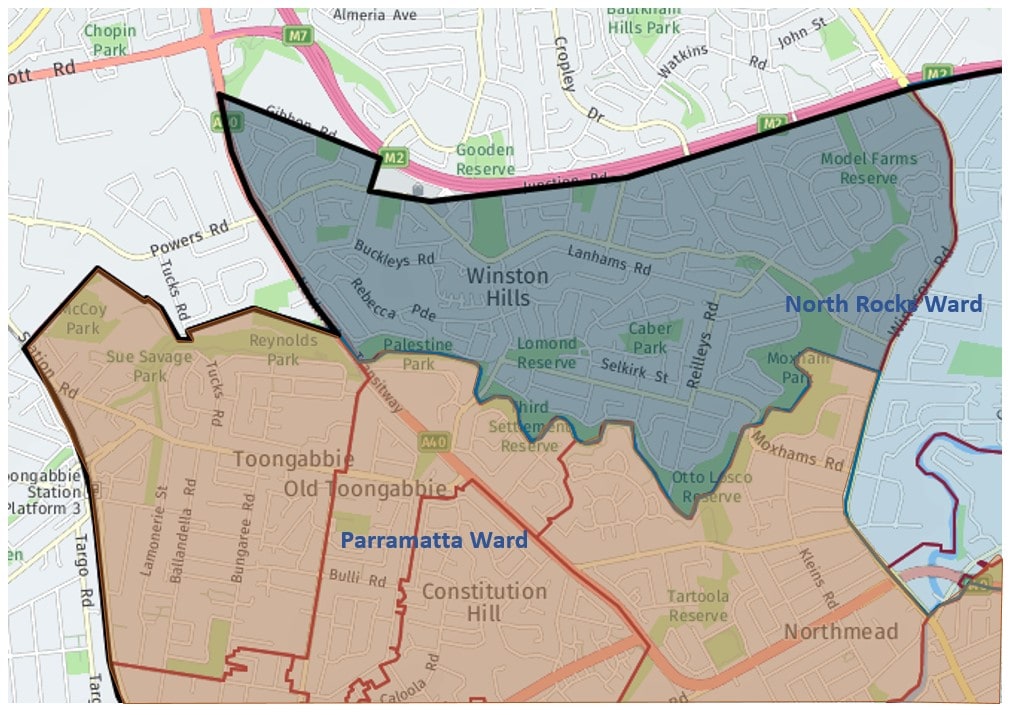 As Winston Hills was part of the Toongabbie area, the original inhabitants were the Toongagal clan, part of the Dharuk indigenous people. ‘Toongabbie’ is of Aboriginal origin, said to mean “meeting of the waters” referring to the confluence of Toongabbie Creek and Quarry Branch Creek.

Toongabbie Government Farm was established in 1791 by Governor Arthur Phillip as the second government farm in the colony after the first successful farm in Rosehill (Parramatta Park) and ceased operations in 1803. It was located on the land that adjoined Toongabbie Creek and the Quarry Branch Creek which in the early colonial days were an important source of water for the settlements established in the Parramatta region. “The farm was notorious for its harsh treatment of convicts who cleared the dense bush and planted the crops to help feed the infant colony”.

Originally known as ‘Model Farm’[4]. The name originated from when the area was set up as part of Governor Lachlan Macquarie’s plan to develop a farm in which to show convicts and free settlers who wished to start a farm the types of crops that could be grown in different seasons and demonstrate farming practices. Farming continued with many Italian and Maltese migrants continuing the pattern after the Second World War. Historical maps of the area that was once Model Farm can be found on Blacktown Memories repository. Today, the name Model Farms has been retained by a local high school Model Farms High School.

During the 1960s, the development division of L. J. Hooker group, the Hooker-Rex Pty purchased large portions of these properties naming their development Winston Hills Estate in 1965 after Britain’s wartime Prime Minister, Winston Churchill (1874–1965) who died that year. Winston Hills was preferred over Churchill Hills. Many of the streets are named after great writers and scientists, Greek gods and biblical figures. The area was officially recognised as a suburb in 1972.

In  2018 Winston Hills had an estimated residential population of 12,811 people[1]. Housing in Winston Hills is mostly low density. There are just two townhouse complexes, while the vast majority of homes (91 per cent, according to McLeod’s figures) are detached, or freestanding. One of the suburb’s major features is the fact that Council won’t allow any more townhouses to be built as stipulated in the 2011 Parramatta Development Control Plan, section 4.2 Special character areas, pp. 4.2 – 20[8]