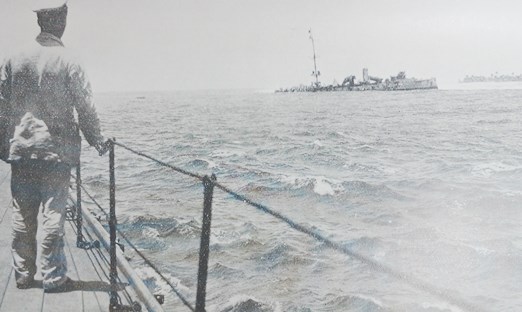 As the final chapter in this story played out the Australian convoy with its powerful escort approached the area with the utmost precaution.

[see part one, part two, part three, part five for the entire history of its exploits and sinking by HMAS Sydney] … Nor was the precaution excessive. In spite of the escort a surprise attack by the Emden at night would have done untold harm among the convoy.

In the words of one of the Emden’s officers … we should have got in among the transports from astern, and slipped into the first division astern of the third and fourth ship, then we should have done all possible damage with our guns and torpedoes, and we should certainly have sunk half a dozen ships, probably twelve, before your escort could have come up and stopped us. Of course this was mere conjecture on the part of the officer.

But even so it is difficult to put limits to the ravaging that could be done at night among a number of defenceless transports by a single audacious cruiser, which could fire indiscriminately-since all other vessels would be enemies while their escort must continually be considering the danger of sinking a transport by mistake. But the Emden’s luck had finally turned and she never dreamed the convoy was there. She knew of its existence, but perhaps a little over-valuing herself imagined that it would make straight across the Indian Ocean in more southern latitudes, if by any chance it dared make for Aden at all. Although the Emden was jamming British wireless signals, the station on the island managed to transmit a message stating that a strange warship was approaching, and a few minutes later repeated this with the prefix S.O.S. At the same time the telegraph operator cabled to Australia that a three funnelled warship was off the island, and was landing a party in boats.

Ships on the convoy also picked up the Emden’s order to her collier the Buresk to join her at Port Refuge in the Cocos group. Von Muller, never dreaming an enemy ship was near, thought it a good chance of coaling in calm water, but several operators in the convoy recognised the message as coming from the Emden. The Sydney, the warship nearest the island (52 nautical miles away), was given the order to raise steam for full speed and run down to the Cocos. By 7 am the Sydney was away, doing twenty knots.

At 9.15 she sighted the island and the enemy cruiser simultaneously although she could not tell whether the ship was the Emden or the Konigsberg as both were supposed to be at large in the Indian Ocean at that time. 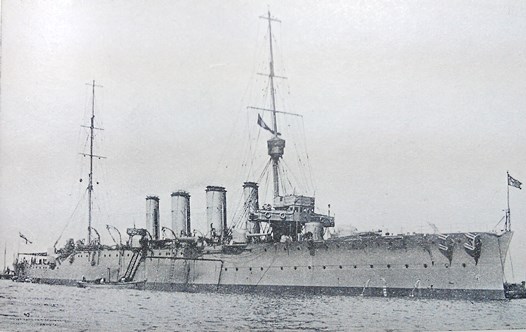 SS Emden aground on reef, from a photo-mechanical print in A Jose, The Royal Australian Navy 1914-1918, Angus and Robertson, 1933

The Sydney knew she had the speed of either, and so slowed down to complete her preparations for the fight. At about the same time Muller sighted her, he had seen her smoke on the horizon for some time before, hut thought it was that of the Buresk. When, however, the signaller reported a four-funnelled ship, he knew her for a British cruiser-but, believing the Australian ships to be many miles off to the south-west, took her for the Newcastle or a sister-ship, nearer his own size and age. Consequently he decided to fight rather than run. After warning the landing party (for which he could not wait) she steamed out to sea so as to have manoeuvring room for the ensuing battle. It is difficult to image the following events without some background on how naval battles were conducted at this time. Instead of a compact huddle of ships shrouded in battle-smoke the realities of single-ship engagement between the fast cruisers of this period allowed each the utmost freedom to manoeuvre, and the movements of each was frequently obscured from the other by drifting smoke from their coal powered engines.