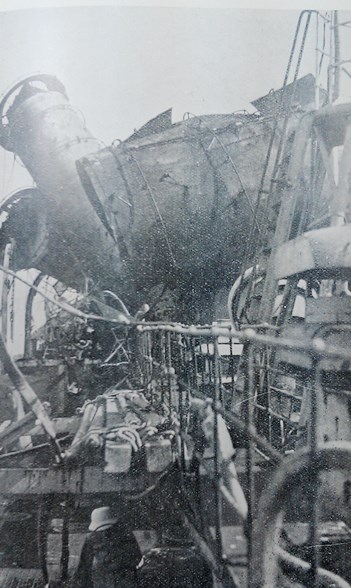 [see part one, part two, part three, part four, part five for the entire history of its exploits and sinking by HMAS Sydney]  … However if the situation had not been so complex and the participants on both sides ignorant of the context in which the battle had been fought they could have avoided some of the regrettable incidents which footnote this engagement.

Following the initial engagement, when Glossop saw the Emden aground and incapable of movement, he left her in order to chase the Buresk which, during the action, had hovered in the vicinity northwards.

Overtaking this vessel shortly after noon, he fired a gun across her bows to stop her, and sent an armed boat aboard. Her German crew, however, had opened and damaged the Kingston valves to prevent her capture. Glossop took on board both the original and the German crew and although the Buresk was sinking fast fired four shots and watched her sink before returning to the Emden.

He reached North Keeling Island about 4pm and found Emden still flying her flag. Glossop then signalled to Muller … ‘Will you surrender?’ in international code. The reply was in Morse, … ‘What signal? No signal books’.

Glossop repeated his message … ‘Do you surrender?’ Receiving no reply Gllossop asked if his signal had been received but Muller remained silent and the German officers who had been captured in the Buresk assured Glossop that their captain would never surrender. Glossop felt that as long as the German flag flew, the Emden was a still resisting enemy and may have been able to discharge a torpedo or resist with rifle fire any boat he should send to board her.

Accordingly, the Sydney ran into about a two-mile range, trained her guns on the main mast (on which the flag was flying) and put in two salvoes. Almost immediately a figure was seen clambering up the mast; the Sydney’s fire ceased, the German flag came down, and a white sheet was displayed from the Emden’s quarter-deck.

This delay cost the lives of more than twenty men. As soon as the Emden had surrendered, the Sydney went back to pick up two boats from the Buresk which had been left behind to rescue drowning sailors. But the situation was not yet safely in hand. Glossop knew nothing of the Germans who had been landed at Direction Island, or the whereabouts of the Konigsburg. He therefore sent one of the Buresk’s boats manned by the German prize crew to the Emden with a message he would return the next morning.

By this time it was late evening and Glossop decided to spend the night of Direction Island monitoring radio signals in case the Konigsburg appeared, instead of landing troops. When he did so the next morning he found they had escaped on a small schooner belonging to the owner of the island.

The Sydney now returned to the Emden to attend to the needs of the survivors. From the cable station on Direction Island, Glossop borrowed Dr. H.S. Ollerhead, (who worked for the Eastern Extension Telegraph Company) and two assistants, and steamed back to North Keeling, where the long delay had brought about horrible conditions. Charles Bean vividly described the scene which greeted them … men were lying killed and mutilated in heaps. The ship was riddled with gaping holes, and gutted with fire; it was with difficulty one could walk about the decks. Practically nothing had been done for the wounded sailors, except that some of them had themselves checked the flow of blood from limb-wounds with improvised tourniquets of cloth or spun yarn. The Emden had two surgeons on her complement; but the assistant surgeon had been blown overboard during the action, reached North Keeling, and lay exhausted all night in agonies of thirst, and in the morning drank saltwater and died raving.

The chief surgeon, Dr. Luther, therefore found himself alone for nearly twenty-four hours in a battered ship with hundreds of badly wounded men, whom he had to attend without any assistance, and with a very scanty supply of dressings and appliances. It is hardly to be wondered at that, when the Sydney arrived, he was for a short time a nervous wreck.

The transference of seventy or eighty wounded men from the Emden to the Sydney took about five hours. Sydney’s surgeon in his official report recorded that the … transhipping was an exceedingly difficult and painful undertaking, as there was a large surf running on the beach where the Emden went ashore, and she was so much of a shambles that the shifting, collecting, and lowering of the wounded into the boats was necessarily rough.

Besides the seventy wounded received that day, there were over 110 prisoners, and 20 Chinese men from the sunken collier; so the crowding can be imagined, seeing that they were a crowded ship before.

Boat from HMAS Sydney coming ashore under the white flag, Direction Island, 10 November 1914, from a photo-mechanical print in A Jose, The Royal Australian Navy 1914-1918, Angus and Robertson, 1933

However the transference was carried out very cleverly and carefully. And it must be further recorded that, except for two operations performed while the Sydney was on her way from Direction Island to North Keeling, the worst cases from the Emden were given precedence over the Sydney’s own. The strain on the surgeons may be gauged by the fact that operations had to be performed continuously from 6pm on Tuesday up to 4.30 am on Wednesday; then a certain number of less severe cases were attended to; operations began again after breakfast, and took up most of the day; and “at midnight we went to bed after a spell of over forty hours without sleep.”

The two medical officers of the Sydney Surgeon-Captain L Darby (George Town, Tasmania) and Surgeon-Lieutenant A C R Todd  Tamworth, NSW) bore the brunt of this work, with Dr. Ollerhead giving excellent assistance until the ship left the Cocos about midday on Wednesday. Dr. Luther was incapacitated for many hours, but took his part as anaesthetist when Dr.Ollerhead left.

On the Thursday there arrived an auxiliary cruiser, the Empress of Russia, under orders to relieve the Sydney of all prisoners who could be moved; and from that time onwards conditions aboard were more comfortable. The Sydney was finally reunited with the ANZAC  convoy at Columbo and it was here that the remaining prisoners and casualties disembarked.