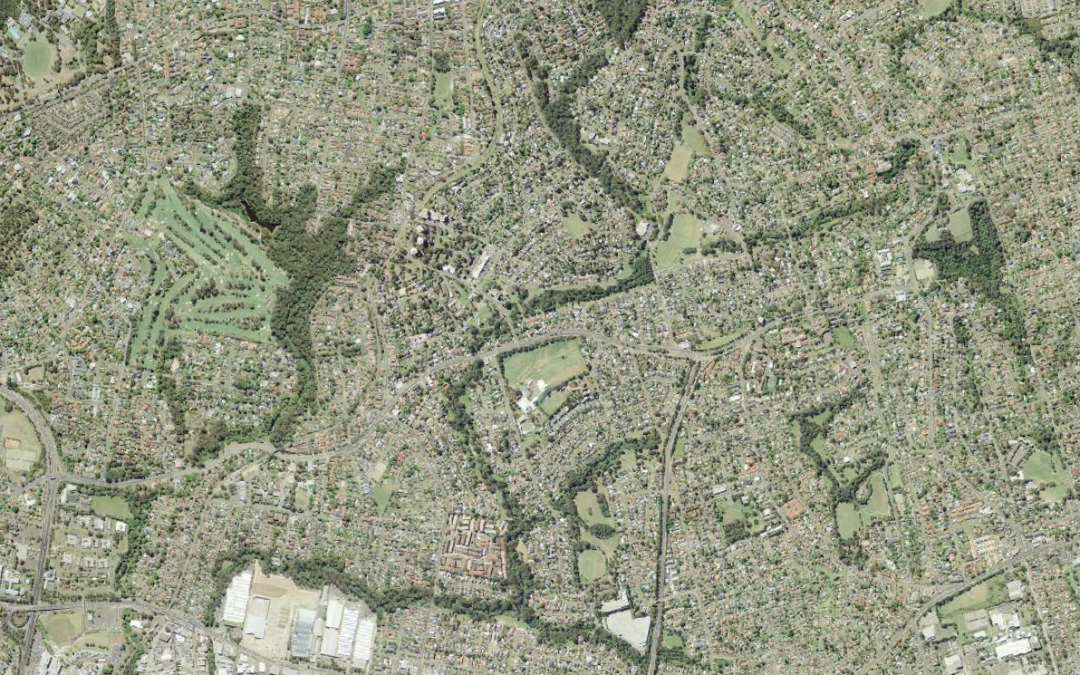 A large part of Dundas and Dundas Valley covers Darug nation lands which have been occupied for thousands of years.  The remains of open camps, shellfish middens and animal bones as well as charcoal drawings have been found. When James Cook planted the Union Jack at Botany Bay, claiming the newly discovered territory for Britain, a young Aboriginal boy watched from the nearby bush. Fifty years later and known as King Harry, he showed Governor Brisbane where the flag had been planted so a commemorative plaque could be placed. King Harry was the last king of Kissing Point and a member of the Wallumedagal Clan, who occupied areas west of the Lane Cove River. The Wallumedagal were hunters and fishermen living among the forest along river banks. Fish was a very important part of their diet, so important that children were sometimes named after the fish caught.

In 1788, it was estimated the Wallumedagal population was between two to three thousand, but following the smallpox epidemic in 1789 the population was decimated. An orphan named Nanbree or Nanbarry, nephew of the Cadigal leader Colebee was seriously ill from smallpox but recovered after treatment by Surgeon John White, who adopted him and named him Andrew Sneap Hammond Douglass White. [2]

For a time, Nanbarry was employed to shoot small game for Surgeon White, with whom he lived. When White left New South Wales in 1794, Nanbarry became a sailor on HMS Reliance, and in 1802 sailed on HMS Investigator with Matthew Flinders. In 1821 Nanbarry was injured in ritual combat and died 13 days later. He was buried within James Squire’s orchard at Kissing Point with Bennelong and his last wife. [3]

By 1800, most of the area was occupied by colonists and very few Wallumedagal people remained.

The Ponds Creek, originally a series of swamps and ponds, is a network of creeks flowing through the valley joining Subiaco Creek and flowing into the Parramatta River to the south. In July 1791 Arthur Phillip settled 14 former convicts and marines on 30 to 50 acre crown grants along these creeks with the grants confirmed in early 1792. Some of the settlers included Curtis Brand, Joseph Marshall, Anthony Rope, Thomas Kelly and John Summers. Grants of 25 to 100 acres were made slightly later to settlers, one of whom was the Reverend James Bain, a chaplain of the New South Wales Corps. Some of the grantees who were unsuited to farming, gave up their grants or sold them. Large areas of land in the valley were acquired by William Cox, who expanded his Brush Farm holdings into the Dundas Valley, John MacArthur and Samuel Marsden. With the amalgamation of the smaller grants the landscape changed from isolated subsistence farmlets into large estates growing wheat and corn and grazing sheep and cattle. [4] 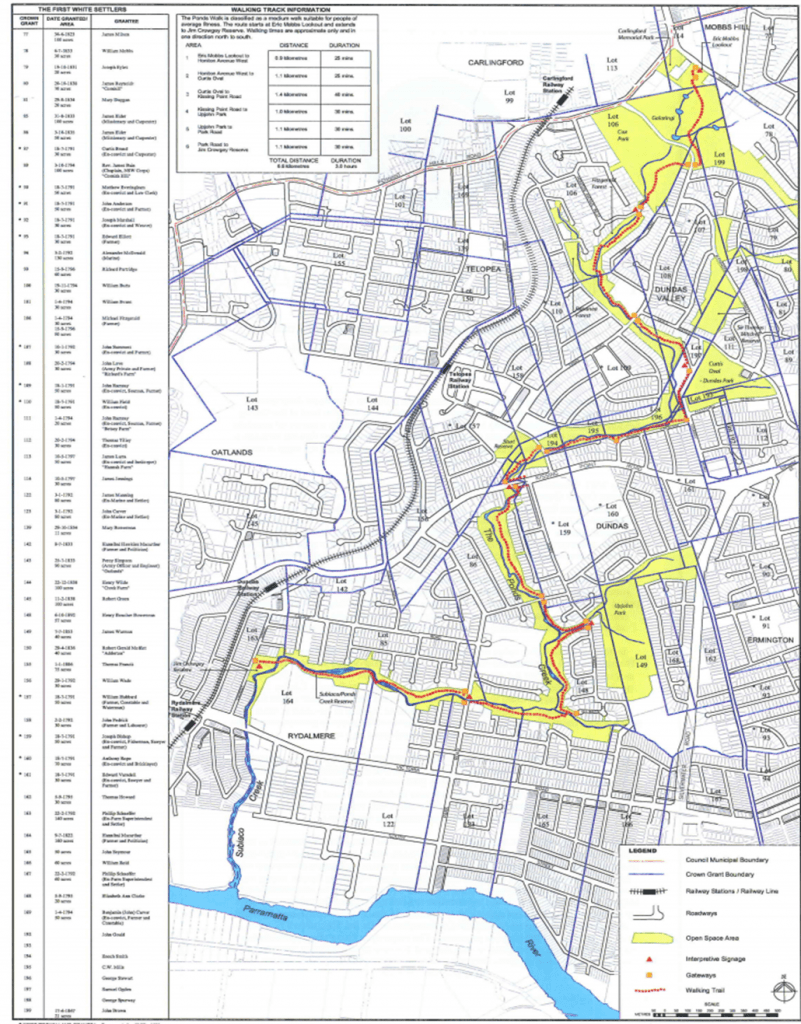 The Ponds Walk Brochure and Map. Source: City of Parramatta

The naming of Dundas

Reverend Samuel Marsden selected an area of 100 acres in the Field of Mars in 1796. He named his farm “Dundas Farm,” in honour of Henry Dundas, Principal Secretary of State for the Home Department.  The name Dundas, as applied to the district now, did not come into use until almost a century later.  The Australian Almanac for 1860 states that Dundas was the name of one of the hundreds into which the county of Cumberland was divided, and that it included the parishes of Marramarra, Berowra, Cowan and North and South Colah.  This area lies considerably to the north of the present day Dundas. The district now called Dundas continued to be known as the Field of Mars until 10 April 1890, when its present name was substituted. When the Dundas Post Office on Kissing Point Road opened on 1 March 1861, it was called the Pennant Hills Post Office, but this changed to Field of Mars in 1867. In 1890 it was finally called Dundas Post Office. [5]

In 1832 it was determined a volcanic plug of columnar basalt found in the valley was suitable for road building and the Dundas Quarry known as the Pennant Hills Quarry was established.  Convicts mined the ‘blue metal’ and it was transported to the Ermington Warf and sent to Sydney by boat. The minerals were unusual and attracted the interest of many noted geologists such as Charles Dana, Sir Paul Edmund de Strzelecki, and the Reverend William Branwhite Clarke. The local government quarry operated until 1902, when it was abandoned.  In later years, it was filled and Sir Thomas Mitchell Reserve playing fields established.

Kissing Point Road, which opened in 1813, serviced the area. It was once a track made serviceable by William Cox who owned the Brush Farm Estate that encompassed much of the valley.  For many years Kissing Point Road was the main road from Parramatta to Ryde.

Signal station
On the edge of the valley, where Lauriston House stands on the north-west corner of Stewart Street and Marsden Road, was a signal station link between the stations at South Head and Old Government House at Parramatta.

The Municipality of Dundas was initially proclaimed as the “Borough of Dundas” on 23 March 1889 by the Governor of New South Wales, Lord Charles Robert Wynn-Carrington. The first Dundas council comprised of nine Aldermen elected on 18 May 1889. They included Joseph Franks, Jeffry Grime and William Midson of Carlingford, James Fulford and George Adamson of Ermington, Alexander Eyles, George Spurway and James Sonter of Field of Mars, and John Ryan of Rydalmere. Their first official council meeting was held at Rydalmere Hall, Rydalmere, N.S.W. on 22 May 1889 where James Fulford (1841-1922) was elected the first mayor. Following a petition, on 30 December 1889, the borough was divided into three wards: North Ward, Central Ward and South Ward. [6]

On the evening of Friday 26 September 1890, Dundas Town Hall officially opened. It was located at 156 Marsden Road, Dundas, N.S.W. About 500 people attended the opening. In time, significant modifications to the building were made including an addition in the 1900s and another addition on Marsden Road in 1938. In 2003, the building was converted into townhouses.

In early 1891, prevailing dissatisfaction with Dundas Council at Ermington and Rydalmere led to 94 residents of the South Ward submitting a petition to the Colonial Secretary’s Department requesting the separation of southern part of the municipality. Thus, the “Municipal District of Ermington and Rydalmere” was proclaimed on 18 June 1891. The separation also led to the reconstitution of Dundas, which was proclaimed as East Ward and West Ward with a total of six aldermen on the same day.

On 6 June 1902, the Dundas council wards were rearranged into three wards with the addition of the Central Ward adding three aldermen to the number from February 1903. From 28 December 1906, following the passing of the Local Government Act 1906, the council was renamed as the “Municipality of Dundas“.

Dundas railway station is a heritage-listed railway station located on the T6 Carlingford line. It opened on 20 April 1896 as Kissing Point Road Station as part of Bennett and Simpson’s private railway – the last privately built and owned station building in N.S.W. It was named Dundas when opened by the State Railway on 1 August 1901. In 2006, a severe fire in the station building destroyed the majority of the building’s original structure. It was reconstructed to the same design in 2007. [7]

Another important landholder was Arthur Yates and Company, publisher of the Yates Garden Guide and seed supplier.  The company established a seed testing trial ground in 1920 covering 47 acres of the valley.  On the farm 1000 different flower and 500 vegetable varieties were grown to determine the suitability of imported seed for Australian conditions.  Local residents recall the colourful carpet of flowers in full bloom covering the valley.  To irrigate the plants water was provided by a small dam near present-day Sturt Street and supplemented with water filling the disused Pennant Hills Quarry.  The seed trial gardens disappeared when most of Dundas Valley was resumed for housing in the 1950s. [8]

The house at 59 (formerly 55) Kirby Street, Dundas, known as “Upjohn House”, is significant because it is one of the earliest houses built in the area and is a rare reminder of the residences of this period. The 1880s saw the first encroachment of suburbia into this otherwise rural setting. “Upjohn House”, or as the house was originally called “Netherlands”, was constructed around 1885. The grandeur of the house and the work carried out to develop its gardens was impressive for the time. The house retains its garden because the parcel of land was zoned Parks and Recreation under County of Cumberland Planning Scheme. Much of the former house grounds are now adjoining Upjohn Park, which was a former golf course, and was later purchased by the Upjohn Pharmaceuticals company during construction of a ‘garden factory’.

Between 1963 and 1964 a major extension was added to the factory and office building by the architect and builder Austin Anderson Pty Ltd. Currently the Upjohn Pharmaceuticals site consists of one office, a factory, car park and electricity substation. ‘Upjohn House’ is on an isolated site to the north of the main facilities. [9]

After the Second World War, Dundas Valley, which was incorporated into the City of Parramatta from 1 January 1949, had large tracts of land still vacant and many areas nearby zoned for industry. The Parramatta district was the focus of much of the early activity of the Housing Commission.  In 1950 major work to build 1,850 dwellings, principally to house workers employed nearby, was centred on Dundas Valley.  Construction was initially hampered by a shortage of materials and skilled labour, but with the difficulties overcome the project was almost complete by 1959.

The suburb of Dundas began to grow quickly after orchard land was subdivided in 1902 and 1905 following the extension of the railway. With the subsequent growth after the war of one of the largest housing estates in Sydney, and a growing demand for Parramatta City Council to provide a broader range of community services and facilities, discussions began to create a new community hall and a larger and better-equipped library. The Dundas Valley Progress Association, an association formed in 1956 as a non-political organisation to work towards the betterment of the district, considered a new library with a community hall as one of its highest priorities. With its rapidly growing membership, this association’s voice proved very influential, and solidified the support for a new library.

Dundas Branch Library was eventually opened on Saturday 5 September 1959, by the Mayor Alderman Eric Arthur Mobbs. The library opened in the old Dundas council chambers with an initial stock of more than 1000 books. In 1963 the new Dundas branch of the Parramatta City Library opened at its current location of 21 Sturt Street, Dundas Valley.

Recently extended and upgraded is the Ponds Walk, which follows the valley’s creeks and bushland remnants and gives a glimpse of the landscape that supported the Wallumedagal in the past.

From Sunday 5 January 2020, the T6 Carlingford to Clyde railway line will be permanently closed to be converted as part of the Parramatta Light Rail that will connect Carlingford to Westmead via the Parramatta CBD. The current stations to be closed include Carlingford, Telopea, Dundas, Rydalmere, Camellia, and Rosehill.